I first discovered Bedell Cellars during my visit to the North Fork Long Island, New York winery/cellar visits in the early winter of 2001. At the time, my cellar notes record that I tasted their Bordeaux varietal wines, 1997 Beddell Cellars Cabernet Sauvignon and Merlot, and their 1999 vintage Chardonnay and Chardonnay Reserve.

We then tasted Bedell Cellars wines at Murray's Cheese Restaurant and wine bar on Bleeker Street in the Greenwich Village, one of Son Alec's favorite eateries in the City. Again, we tasted Bedell Bordeaux varietal wines there based on Cabernet Franc.

What a fun surprise to find this Bedell Cellars artist series Bordeaux varietal release in our local wine shop, Sav-Way in nearby Hinsdale, IL. I must admit, were it not for the catchy artsy Artist Series label, I may have missed it.

Bedell Cellars are the namesake winery and vineyards of founders Kip & Susan Bedell who planted their first grapevines on their acquired fifty acre former potato farm on eastern Long Island back in 1980. Kip's passion and dedicated work over the next two decades earned him the moniker ”Mr. Merlot” in Wine Spectator magazine.

Bedell cellars was bought in 2000 by Michael Lynne, a New York film executive and art collector. Continued investment in the property and brand propelled Bedell to one of the benchmark wineries in the eastern US producing the best wines of the Long Island appellation.

The acquisition of Bedell allowed Michael to combine lifelong passion for wine and food with his love of the theater, film and art. A graduate of Columbia Law School, he leads an entertainment law firm with a long running association with New Line Cinema one of the world's most successful independent film companies. Today he is Principal of Unique Features, a film production company and an esteemed contemporary art collector and Trustee of New York’s Museum of Modern Art.

That convergence of his love of art and wine are manifested in the Bedell Artist Series featuring specially commissioned works by world renowned contemporary artists on the labels of special release wines. 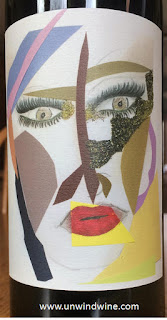 This label, Bedell Cellars First Crush Red Wine features the artwork of  Mickalene Thomas, an internationally renowned artist and filmmaker. Her work explores the intricacies of female beauty through painting and collage. Her installation 'Better Days' was featured at Art Basel and her documentary, 'Happy Birthday to a Beautiful Woman' premiered on HBO. She painted the official portrait of First Lady Michelle Obama for the Smithsonian Portrait Gallery.

For Bedell's First Crush labels Mickalene selected a collage from her 2014 series, Tête de Femme, portraying abstracted female faces constructed from abstracted geometric cutouts. In this work, Mickalene combines art-historical, political, and pop-cultural references to comment on notions of beauty and gender in the 21st century.

Is it coincidence or inspired that this label has similar design and color schemes of this legendary premium Italian label? In any event its a fun and interesting comparison in style and design between Mickalene Thomas' work and the Azienda Agricola Montevertine Le Pergole Torte Toscana IGT Italian Sangiovese. 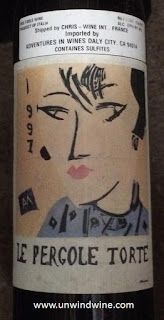 First Crush is a red blend of young vine Merlot (75%) and Cabernet Franc (25%) fruits, aged in stainless steel. Dark garnet colored with purple hues, it is medium light bodied with initial aromas of damp wood, leather and dusty rose petals, gripping tannins are pervasive from the initial bright vibrant red berry and cranberry fruits through to the layer of spice, dusty rose and cedar with tones of green bell pepper and tangy black cherries on the lingering finish. The tangy notes of the fruit may be attributable to the youthful vines. The finishing floral aromatics are more desirable than the opening.

At the release price of $30 there are better values out there, but at the 'street price' below $20, this provides good value QPR - quality price ratio.

Posted by UnwindWine at 5:42 PM No comments: Links to this post