Friday night, quiet dinner at home, Linda grilled some steaks and vegetables and I pulled from the cellar this middle-aged vintage Bordeaux for simple, pleasant drinking accompaniment from this 'lesser' appellation.

Château Clos L’Eglise is a 40-acre estate in St-Magne de Castillon in the appellation of Côtes de Castillon, lying at the easternmost edge of Bordeaux's Right Bank, adjacent to the larger and more famous St.-Émilion. 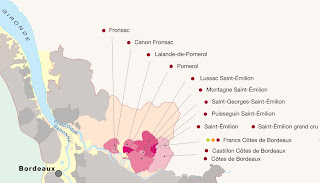 Côtes de Castillon is a lesser appellation, also known as one of the 'satellite' appellations. The main town of Castillon-la-Bataille lies on the Right Bank of the Dordogne River which flows into and meets the Gironde river above the city of Bordeaux to form the Gironde Estuary that flows westward to the Atlantic.

A smaller appellation consisting of  2,900 hectares (7,500 acres). most of the domains are less than 10 hectares (25 acres), never-the-less, it produces 22 millions bottles of Merlot and Cabernet Franc based red wines a year.

Adjacent to Saint-Emilion, Côtes de Castillon has the similar terroir of plateau and hillslope, about 20% of the vineyards lying on the Dordogne’s silty plane and on a sandy area in the east of the appellation rising up to a limestone plateau which twists around a number of wooded hills and valleys, eventually reaching 117m at Saint-Philippe-d’Aiguilhe. The terroir is climatically a bit cooler than St Emilion, making the harvest a little later, and requiring good vineyard management.

Many St Emilion producers are expanding into the area. Stephan von Neipperg, well known owner of Château Canon-la-Gaffelière and La Mondotte in Saint-Emilion, was the first on the scene when he bought the 30ha Château d’Aiguilhe in 1998. He has been followed by other Saint-Emilion luminaries including Gérard Perse of premier grand cru classé Château Pavie, who acquired Sainte-Colombe, Clos l’Eglise and Clos des Lunelles (formerly Lapeyronie), and Gérard Bécot of Château Beau-Séjour Bécot, who launched Château Joanin Bécot with his daughter Juliette in 2001. 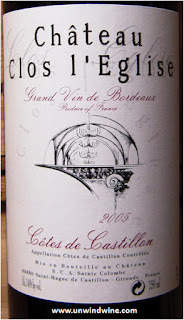 The Château Clos L’Eglise estate is owned by Gérard Perse, a French businessman and one-time bicycle champion. Perse sold two supermarket chains to finance his entry into the world of winemaking. He owns several Bordeaux estates, including Château Pavie and Pavie-Decesse. He stopped making wine under the Clos L’Eglise label after the 2008 vintage and since then used the estate’s grapes as part of the blend for his new Esprit de Pavie, a second wine for Pavie. Robert Parker cites that Clos L’Eglise was one of the least expensive wines produced by Gerard Perse.

Back in May of 2019 I wrote about this wine,  "Dark garnet purple colored, medium bodied, dark berry fruits accented by notes of leather, tobacco, tea and hints of menthol, turning to nice fine grained tannins on the lingering finish."

Posted by UnwindWine at 9:05 AM No comments: