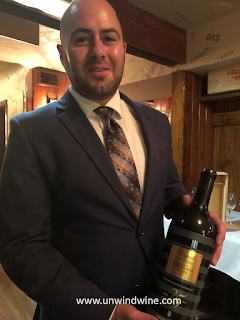 For a midweek dinner respite from hosting my global sales team, I stole away to perennial favorite, Italian Village - Chicago for a relaxing dinner before hosting the group for a team dinner the next evening. 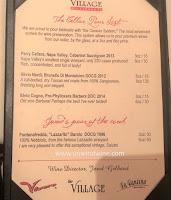 Wine Director and wine buddy Jared (Gelband) (right) served up several wines from the WBTG (Wine By The Glass)  list and Jared's special "Jared's pour of the week" list served in the upscale Vivere Restaurant. 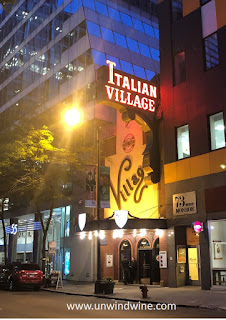 In its 92nd year, IV actually consists of three restaurants each with its own kitchens, chef and menu's. The three restaurants are on the three levels of the site on Monroe Street between Clark and Dearborn Streets. They share one wine cellar and one wine-list from the main cellar,  with the exception that Jared prepares a premium reserve wine-by-the-glass selection for the upscale Vivere Restaurant on the ground floor. I sampled the offerings from the standard as well as that special list.

Prior to dinner I tasted the house Verdicchio, a pleasant light and refreshing starter. I feature that wine in a separate follow on blogpost where I explain the grape varietal and the complexities of parsing the complex Italian wine label - Barone Pizzini Verdicchio dei Castelli di Jesi Classico Riserva San Paolo Pievalta DOC 2013.

With caprese salad of heirloom tomatos and mozzarella, I tasted the current 'house' Brunello di Montalcino offered from the WBTG (Wines By The Glass) list. 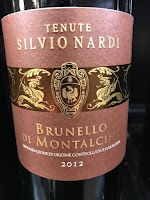 This paired nicely with my pasta course and begs for a robust cheese or bolognese meat sauce. 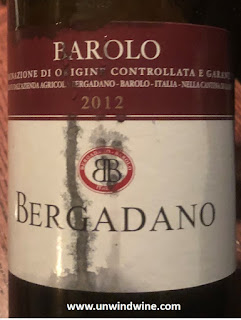 Slightly opaque ruby colored, medium bodied, tangy black cherry and black berry fruits with notes of tar and tobacco leaf with a layer of acidic tannins on the lingering finish.

Barolo is a DOCG (Denominazione di Origine Controllata e Garantita) wine produced in the northern Italian region of Piedmont. It is made from the Nebbiolo grape and is one of Italy's greatest wines. Barolo wines are produced in the communes of Barolo, Castiglione Falletto, Serralunga d'Alba and parts of the communes of Cherasco, Diano d'Alba, Grinzane Cavour, La Morra, Monforte d'Alba, Novello, Roddi, Verduno, all in the province of Cuneo, south-west of Alba.

Barolo production codes stipulate that vineyards must be located on hillsides, however a recent revision of the production code released in 2010 goes further to specifically exclude valley floors, humid and flat areas, areas without sufficient sunlight, and areas with full-on northern exposures.

Barolo wines are noted for their ability to age and need to be aged for at least 38 months after the harvest before release, of which at least 18 months must be in wood. 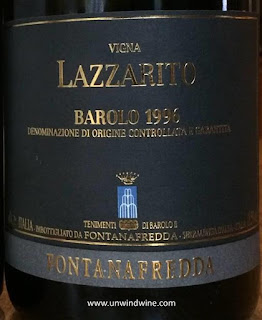 This is a single vineyard designated bottling of 100% Nebbiolo from the legendary producer. This was a very special offering to be able to sample BTG - By-the-Glass, it was offered as "Jared's pour of the week" on the Vivere Restaurant special offer wine-list.

Wine buddy Dr Dan and I tasted this same label last year BYOB from his cellar at a dining outing together.  Dan served the '99 vintage of this at his Big Italian wine dinner last year. At our wine dinner outing, my tasting notes stated. "This '96 showed medium bodied, dark garnet colored, vibrant bright black cherry fruits, tones of acidity, tar, smoke and leather on a moderate tannin lingering finish."

Later Jared served up a special Amarone by the glass as well.

The next evening for my team dinner, Jared served another Barolo from the same producer, instead of this single vineyard designated label, according to the 25th anniversary label, this is the first 'single-village' bottling from Serralunga D'Alba, served in magnum as well as several standard size bottles.

Posted by UnwindWine at 1:30 PM No comments: Links to this post