About a year ago this week, I wrote in these pages about Conway Family Wines and got a kind note from them about my post. At that time, I had just opened their wine for a casual weekend evening of wine, fruit and cheese. This week, we opened it as our second wine for a beef tenderloin dinner and it tuned out to be the highlighter of the evening.

As I have written before in these pages, I found this wine downstate and tasted it, then went back and bought more. Previously, I found their Syrah and went back and bought more, twice, ending up buying out their entire stock. After buying out this Cabernet, I returned to the same retailer again later and discovered they had another case on the shelves. I had just been questioned about wines for a holiday party by a colleague and in our discussion I spoke of this wine. As it happened another colleague was downstate and we reached out to him prompting him to go by and buy out the remaining stock from the merchant, which we split between us. Such it is with these wine finds.

Like before, we only consumed half the bottle the first evening we opened it and found the remainder of the bottle when revisited the next evening was as good or even better than it was initially. Such it is with hearty well structured wines of a half dozen years of age. This was the same as the notes from my earlier tasting experience, when we opened re-opened it, it improved upon revisiting the following day!

Here are my notes from the previous but similar tasting of this wine, earlier this year.

Consider this a Negociant wine since, according to the wine producer, it is sourced from a "number of the finest, well regarded vineyards within Napa AVA’s of Rutherford, Atlas Peak and Pritchard Hill, with each one contributing their unique characteristics to our blend".

According to the producer's release, "the dark fruit notes along with distinctive and pleasant chalky sagebrush notes greet your nose at first. This Cabernet has as plush an entry as we’ve seen in a lot of years. A round, soft, mouth filling wine that shows a smooth backbone of tannins and balanced acidity. The finish wraps up nicely with a lingering reminder of the mature dark fruits, ever so slight a hint of new oak, and the ever present palette of flavors that make Cabernet so sought after!"

This has incredible QPR - quality price ratio, at its price point below $20. The wine producer lists it at $39.

Compared to last year when I last wrote about this wine, tonight it presented a layer of sweetness, moreso than I recall or reported on earlier. Dark garnet colored, medium to full bodied, full fruit forward black raspberry and cherry fruits with a layer of spice and hints of graphite and tea, turning to tones of sweet mocha, almost caramel like, with nice balance and smooth polished tannin finish.

I remember I bought this highly recommended and rated Spanish wine at a wine shop in McLean, VA while on a trip to WDC several years ago. I've kept it to share with friends Bob and Gloria who have Latin ancestry and heritage. So it was that I pulled this out for dinner with them last evening with son Alec visiting home from NYC for the weekend to partake in the Cub's World Series regalia. It was a fitting accompaniment to Linda's beef tenderloin dinner.

Aside Bodegas El Nido Jumilla Clio which we collect and hold a vertical of a half dozen vintages, this is one of very few Spanish wines we hold in our cellar. I realize I know very little about Spanish wines. Hence, I took some time to parse the full name of this wine with all its names and syllables, as shown above. I see why folks can be bewildered if not overwhelmed by the complexities or intricacies of wines in general, or in this case, Spanish wines. It doesn't help that its a Spanish wine with Spanish terms and names, which exacerbates the situation in light of me being totally ignorant and non-literal in Spanish. I see why, and suppose folks can get equally tangled up in Italian and French wines and labels accordingly.

Few people realize that Spain has over 1.17 million hectares (~2 acres per hectare) of vineyards making it the most widely grape varietal planted country in the world. However. Spain is the 3rd producing country after Italy and France, due to the very low yields and wide spacing of old vines planted in the dry and infertile soils found in many Spanish regions.

Like Italy, Spain has an abundance of over 600 indigenous grape varieties, although most of their production comes from about 20 grapes including Tempranillo, Albariño, Garnacha, Palomino, Arien, Macabeu, Parellada, Xarel.lo, Cariñena and Monastrell.

The source grape for this wine is Mencía, a Spanish red grape varietal found primarily in the northwestern part of the country. Most wines produced from Mencía have characteristics of being light, pale, relatively fragrant and appropriate for early consumption.

Mencía is indigenous from the Bierzo DO appellation and some suspect that it is an ancient clone from Cabernet Franc. 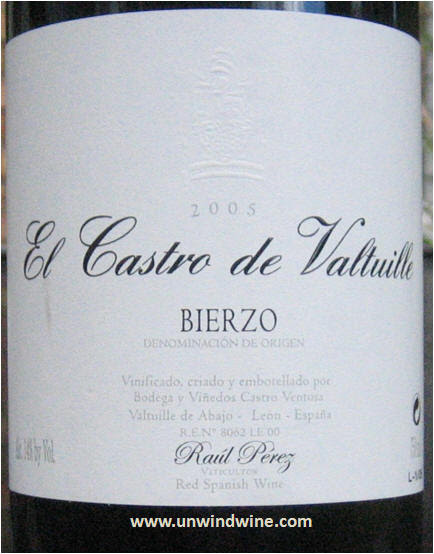 The producer Castro Ventosa was founded by the Perez family in 1752 and has been in the family ever since. They have 75 hectares of Mencía vineyards in the appellation of Bierzo, making them the biggest owners of this varietal within the Bierzo D.O. (Denominación de origen). The Bierzo appellation is made of 5000 hectares (ha) with 2500 planted with white varietals and 2500 ha planted with Mencía. Interestingly, there are 5000 landowners within the appellation.

Bodegas y Viñedos is Spanish for wineries and vineyards.

Castro Ventosa is the name of the producer.

El Castro de Valtuille is the name of this particular wine.

Bierzo is the Spanish DO (Denominación de Origen) or appellation.

Mencía is the Spanish grape variety in the wine. Note the only reference to Mencia is on the rear label (shown left).


2005 - the vintage release of this bottle - all the grapes were harvested during this vintage year.

Tonight this wine was dark bright ruby colored, medium bodied, firm, tight, somewhat concentrated and coming across as a bit flabby, with black fruits with tones of spice, black olive, hints of cresote and tangy black cherry on the finish.