Celebrating a personal milestone achievement this week, I wanted to pull a special bottle from the cellar for a Sunday afternoon grilled steak dinner. With many from which to choose, I selected this Palmaz Vineyards Gastón Napa Valley Cabernet Sauvignon 2001. As noted on the Palmaz website, this limited release label is only produced in top vintages. It is named for Amalia and Julio’s Palmaz' son, Christian Gastón, and "comes from the best lots of Cabernet on the vineyard, and is made and released only when the family feels that the wine will live up to its special designation. Generally this wine features a focused intensity along with a rich texture, with notes of cocoa and blackberries cradled in lush oak-driven aromas. Whatever the year, one constant remains: This wine represents the estate’s best."

Julio and Amalia Palmaz along with their children, Florencia and Christian Gastón (and Christian’s wife, Jessica Louise), have created a winery that leverages tradition and technology in the service of crafting great vintages, a 600-acre estate with 64 acres of vineyards that produce premium and ultra-premium wines among the finest from Napa Valley.

The property was originally developed by Henry Hagen who arrived on the West Coast in in 1852 during the height of continental expansion and the Gold Rush. He initially settled in San Francisco then in 1881 headed north, purchasing a parcel of land in the southern end of nearby Napa Valley, against the forested ridges of Mount George above what is now the town of Napa. There he founded Cedar Knoll Vineyard and Winery, where the Palmaz Vineyards and family reside today, just off what’s now known as Hagen Road.

Hagen became one of the pioneers of the Napa Valley producing noteworthy wines that were featured at the San Francisco Opera House and wining a silver medal for his brandy at L’Exposition Universelle de Paris 1889 World’s Fair.

Hagen died in 1895, leaving behind 450 acres of “fine vineland.” While Cedar Knoll was lauded for its wines (and spirits), Hagen’s descendants did not pursue the business and with the arrival of Prohibition in 1919, the property’s winemaking endeavors were abandoned until the Palmaz family purchased the property in the late 1990s to set about restoring its former glory. 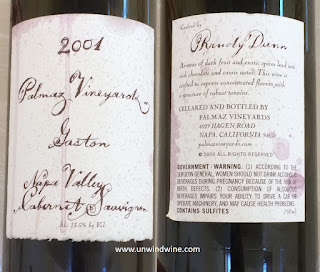 This label is named for Amalia and Julio’s son, Christian Gastón, and consists of the best lots of Cabernet on the vineyard. It is made and released only when the family feels that the wine will live up to its special designation, this wine represents the estate’s best.

This 2001 release was the premier inaugural release of Gaston Cabernet Sauvignon and was the first wine release from the Palmaz family beginning an endeavor in single varietal expression. It was produced by none other than the legendary winemaker Randy Dunn at his Howell Mountain winery in the hallmark of the Dunn style with its firm structured expressive fruits. 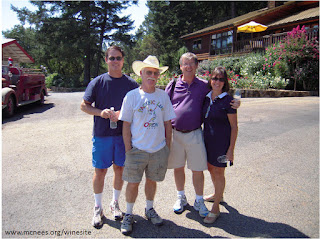 A visit to the Dunn estate and vineyards to meet Randy was a highlight of our Napa Valley Howell Mountain Wine Experience back in 2008 (shown right).

The winemaker noted, "The 2001 vintage exhibits aromas of dried rose petal and cranberries, with undertones of leather. The acid bursts onto the palate and carries through to a refreshing finish. This Cabernet Sauvignon is reminiscent of classic Bordeaux, featuring firm tannins and alluring brown flavors."

According to Stephen Tanzer in his Jan/Feb '05 International Wine Cellar review: "Dark ruby-red. Medicinal black cherry and a whiff of band-aid on the nose. Then juicy and primary on the palate, with fruit-driven flavors of tart redcurrant and pomegranate, along with a suggestion of berry skin. Firmly structured if a bit youthfully rigid. I would have picked this as cabernet franc. Finishes with firm, dusty tannins. A rare beast: a Napa cabernet from a ripe year with less than 14% alcohol."

This was dark ruby colored, medium full bodied with complex, bright expressive slightly tart black cherry and currant fruits accented by a layer of what Steve Tanzer referred to a medicinal "band-aid" note, with tones of menthol, earthy leather, hints of creosote tar with dark spices turning to firm but approachable dusty tannins on the moderate finish.

This is a Bordeaux style blend of 89% Cabernet Sauvignon 7% Merlot 2% Cabernet Franc and 2% Petit Verdot.

Posted by UnwindWine at 3:22 PM No comments: