Just returned from a week in Florida and the Magic Kingdom, son Ryan and Michelle invited me over to dinner. Ryan grilled bbq ribs on his new incredible Spectrum Series Webber Grill. He served a Thomas Thurston "The Geologist" Premium Red. I brought a Double Diamond Diamond Mtn Meritage. 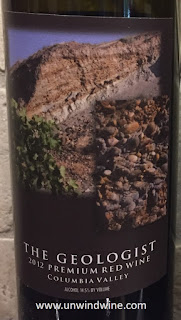 According to the producer, "The Geologist was inspired by the dramatic volcanic and fluvial geology of eastern Washington’s viticulture regions. The front label shows a key component, the Snipes Mountain growing area, with its unique ancestral Columbia River conglomerate soils directly overlying ancient weathered basalt. The Geologist captures in the bottle this viticultural legacy as well as recognizing the professional inspiration of one of our family members; geoscientist, Michael Yeaman. This is the fifth vintage of this blend and was aged 22 months in French oak and three years in the bottle before release. Limited production of 104 cases with release October 2016."

This is a blend of:
Ryan said this had been opened for a day and had closed down since initial opening. It was bright garnet colored, medium bodied with bright expressive Bing Cherry fruit accented by bright acidity and a layer of smoke. The structure was a bit flabby masking the potential complexity of the blend. I sense and wonder if this would integrate and show better after a couple more years of settling.


Since Ryan married a Diamond, I have fun collecting 'Diamond' labels and sharing them with him and wife Michelle. The Double Diamond Brand was marketed by Schrader Vineyards for several vintage releases from 2002 onward to this day. We hold a half dozen releases of Shrader Double Diamond during this period. This particular release in 2000 was 295 cases produced by Midsummer Cellars of Sebastapol, CA. The blend was 50% Cabernet Sauvignon, 25% Merlot and 25% Petit Verdot. 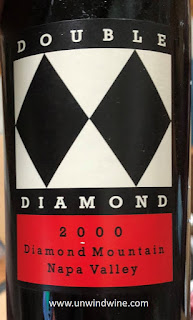 Midsummer Cellars is Rollie and Sally Heitz who started Midsummer Cellars that year, 2000 with the goal of making small lot handcrafted wines of distinction that reflect the terroir of and individuality of their vineyard sources.

Today, Midsummer Cellars produces only vineyard-designated Cabernet Sauvignon from three vineyards -- their own Cañon Creek Vineyard, as well as the Tomasson, and Clark-Claudon Vineyards; all of which show their distinct characteristics in the wines created from them.

Rollie Heitz has a lifetime of winemaking experience having grown up in the business at his family’s Napa Valley winery. He learned how to make fine wines while working alongside his father, Joe Heitz, for several years before deciding to leave the family business and establish his own winery in 2000.

Today, Midsummer Cellars is located at the base of the foothills north of Saint Helena, just off the Silverado Trail. The winery is small --  with beautiful vistas to the east -- and within this small space we are able to produce true wines of distinction that we hope you will enjoy.

So this was the inaugural vintage release of Rollie Heitz with grapes sourced from this  Diamond Mountain vineyard. I picked this up at auction from a lot of only three bottles so its not likely you'll see or find this soon.

This was dark garnet colored, medium full bodied with bright expressive black berry and black cherry fruits with a layer of tar, leather, smoke and tobacco leaf with moderate tannins on the finish.

P.S. I wrote to Rollie Heitz to see if we could meet during our upcoming trip to Napa. He promptly responded with the following note:

We have purchased a small vineyard, winery and home just outside of the small town of Todi in Umbria and we will begin making wine there beginning with the 2018 harvest.

I'm sorry that we missed you.  If you find yourself heading to Umbria please look us up.

We wish Rollie and company the best in their new venture in Umbria!
Posted by UnwindWine at 11:14 PM No comments: Links to this post