For a horizontal comparison to the Clark Claudon 1997 Napa Valley Cab from the other night, we tasted this Del Dotto Napa Valley Rutherford Cabernet Sauvignon 1997. This was one of our discoveries during our Napa Valley Wine Experience trips back in 1998 and 1999, and again in 2001 and 2003. I remember taking their wines to a Christmas party back in 2000 and they were the stand-out highlight wines of the evening.

This is another well rated selection from this heralded vintage from a producer from whom we hold a vertical collection of over a dozen vintages. Del Dotto is one of our favorite Napa producers whom we met and starting collecting their wines from their inaugural vintage back in the early nineties. We've been amply rewarded as their wines are proving to be long lived and age-worthy with many early vintages still coming of age. 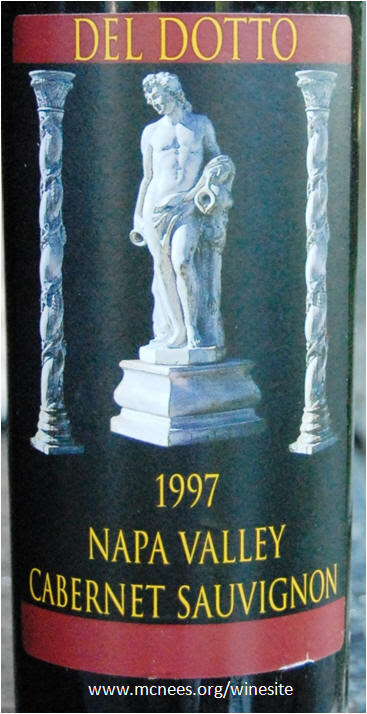 Like several of the other labels in our horizontal collection from this vintage, this one is proving not to live up to the high expectations set for this much hyped vintage, certainly relative to other near vintage releases. In the case of the Del Dotto, I've written how their release from the much panned 1998 vintage has been drinking very nicely, and we've found their 2001 release to be especially impressive. We brought this along on our getaway weekend and enjoyed this watching the two Michigan's represent our favored Big Ten in the March Madness Elite Eight roundball tournament.

Having acquired more than a case of this selection, we've been able to comparison taste it's aging over the decade plus. Our last published tasting was three years ago.


My previous tasting notes over the last five years showed this selection coming of age and opening up with more fruit as it matured. Compared to the Clark Claudon tasted Friday evening, this presented bigger, more pronounced and livelier fruits of currant and berry flavors accented by nicely integrated oak before giving way to hints of cedar, leather and tobacco. Dark garnet colored, moderately firm with refined lingering tannins, this '97 still is vibrant and has several years of pleasurable easy drinking left.

Posted by UnwindWine at 6:05 PM No comments: