Following the 2007 and '08 vintage Napa Cabernets last week, I wanted to compare with some other near vintages from that era. We hold a vertical collection of more than a dozen and a half vintages of this label dating back to the 1996-97 releases. We opened this to taste with leftover lasagna one night and beef tenderloin the next night. This was more fruitful and floral the second night than the first, sufficient such to warrant a a personal rating two points higher.

From the classic legendary Beaulieu Vineyards, one of the first historic producers in Napa Valley dating back to 1900. The Tapestry label was first released in 1990 as a complement to the premium flagship Georges de Latour Private Reserve Cabernet. Tapestry is appropriately named as it represents a blend of all the classic Bordeaux varietals: Cabernet Sauvignon, Merlot, Cabernet Franc, Petit Verdot, and Malbec. Tapestry is sourced mostly from the BV vineyards 1 and 2 at the famous historic Rutherford Estate along St Helena Highway, the same sources that provide grapes for the Georges de Latour Cabernet.

This is a quality sophisticated label that compares with higher priced premium labels and Bordeaux that sell for ten to twenty-five percent more. Its impressive that BV can produce a consistent quality wine such as this in large production. 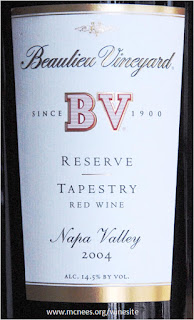 Consistent with earlier tasting notes, dark garnet colored, medium-full bodied, nicely balanced and textured, a bit tight and closed initially, the brambly black berry fruits were highlighted by a layer of cassis eventually giving way to tones of tea, tobacco and cedar, with hints of anise and smokey oak on a moderate tannin lingering finish. After being open for a day the black berry and black cherry fruits revealed themselves accents by a violet floral layer.

RM 89 initially, 91 after opening on the second evening.