With Sis-in-law Dr Pat visiting for the weekend, I had to pull for her and wife Linda, their High School mascot label wine namesake, 'Oracle' by Killikanoon.

Oracle is the top of the Killikanoon moderate and premium line of almost a dozen Shiraz' save their super ultra-premium special designation labels. Oracle Shiraz has been released each year since 1997 except 2011, crafted from old vine fruit grown along the golden hillside in Leasingham in the Clare Valley in South Central Australia. Oracle is renowned for its opulence, regional character terrior and varietal power for which the valley is known. 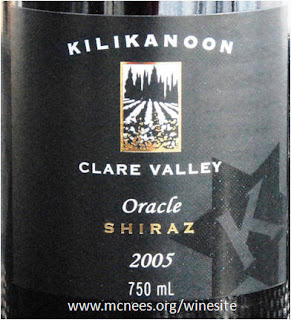 Similar tasting notes to my last entry back in 2009 when this wine was only five years old. Now three times that age, it still presents the massive blackberry liqueur accented by full bodied blueberry, notes of kirsch, expresso and hints of cinnamon and clove spices. Dark blackish garnet colored with full body and fine grained approachable well integrated tannins on the long lingering finish.

Over the years since the earlier tasting, the berry fruits are starting to give way to a notes of raisin and hints of leather.


For a comparison horizontal tasting, I also opened another South Central Australian Shiraz from the same 2005 vintage. 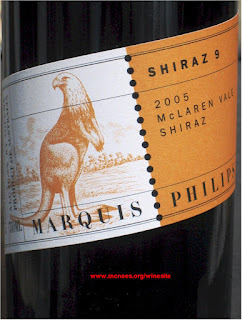 Marquis Philips is the label of winemakers Sarah and Sparky Philips with their whimsical label of that era featuring the 'Roogle' (shown left), a cross between eagle and kangaroo representing their joint venture with Dan Philips, their American distributor. They disbanded a few years later and started their own label that has become the well known Mollydooker brand.

Like the Oracle above, this too resembles the earlier tasting from a decade ago but this was already a bit of super ripe berry fruit bordering on raisiny.

Not as polished and integrated as the Oracle, this is more opulent and obtuse with its big rich forward overly ripe dark berry, mineral and graphite, with notes of expresso, cola and hints of dark bitter mocha chocolate.

Parker loves this stuff! WA 96-98 Pts. - "The 2005 Shiraz 9 (a 4,000-case cuvee that spends 18 months in new and one-year-old American oak) reveals a big, toasty, smoky nose, but the oak is beautifully absorbed by extravagant quantities of blackberry and cassis fruit intermixed with licorice, incense, and spice. This full-bodied, powerful, rich, layered stunner should drink well for a decade."

Posted by UnwindWine at 6:00 PM No comments: