Republished from my Winesite. Big bottles are fun! They're great for parties, gala dinners, and of course especially for celebrating special occasions.  There are 13 different bottle sizes. The larger sized bottles are produced in less quantity than the standard size bottle, and are typically worth more than just the proportionate incremental size price of the regular size bottle.

Champagne* is most popular and common in using larger bottles. We've all seen champions such as Formula 1 Race winners shaking and spraying the large bottles of Champagne from the winner's podium, the World Series and NBA locker rooms, and so on.... Moreso, we've seen the smaller format bottles which provide the convenience of portion size packaging such as for use on airplanes or as available in wine shops for individual dining or such as for picnics. Another great use of small format bottles is when conducting a tasting of several wines, smaller bottles allow for more choices. Our friend Andy M has been known to show up at a wine tasting with a six pack corrugated carton containing half-bottles (375ml) of quality vintage wines.

The magnum is a double sized bottle (1.5 liters) and is one of the best selling sized bottles for Champagne. Many California Cabernet Sauvignons, Red Bordeaux, and Red Burgundies are produced and collected in large (r) formats. It is generally accepted that wine will age better - longer, more gracefully and uniformly in a large format bottle - hence their popularity with collectors. There is also great novelty and fun in opening and serving a large bottle. Often for special occasions, one will have all the quests sign the label of a large bottle as the labels are proportionately larger with the large bottles allowing room for such celebratory signings. Look for large format bottles in the wine rooms and special bottle rack in quality wine shops.

The novelty of our Rick's large format bottles and labels from the vintage years of our kid's birth years was the basis for our feature in Wine Spectator Magazine. This provides a great combination of birth year wines and large formats for gala celebrations. (We're now monitoring the recent vintages, birth years of our new grandchildren).

* Of course Champagne refers to the wine region in the northeast corner of France known for its world famous sparkling wines. Only wines produced in this geographic area bear the trademarked Champagne designation and label. All others are 'sparkling wine'. Some now claim to be produced using the  méthode champenoise reflecting the traditional method developed in the Champagne region over the centuries for applying secondary fermentation to gain the effervescence or 'sparkling' or bubbles in such wines.

Posted by UnwindWine at 7:07 PM No comments:

As featured previously in this blog, Josh Jensen and his legendary Calera Vineyards were featured in Marq Devillier's wonderful 1994 book - "The Heartbreak Grape: A California Winemaker's Search for the Perfect Pinot Noir". The story tells the tale of Josh's quest to grow the very finnicky Pinot Noir grape in California in the early days before Pinot was cultivated here. In pursuit of his dream to create authentic Burgundian style wines, he sought to find the place in California suitable to achieve that goal. It tells of his research to find the right terrior - all the attributes of the right location, soil, climate, drainage, and other nuances of 'place' that make up the character and personality of a wine from grapes of a particular site. Josh chose Mt. Harlan, an area not then know for grapes or winemaking. The rest, as they say, is history. While it is a human interest tale, it also provides a rich insight into the challenges and travails of setting up a winery, and a business, and achieving one's dream to make noteworthy wines. 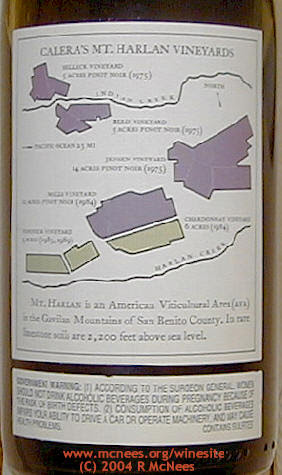 Calera’s Mt. Harlan Vineyards are located in Hollister, California, in the Gavilan Mountains, 25 miles east of the Monterey Bay. The site was chosen for its limestone soils and ideal climate. At an average elevation of 2,200 feet it is among the highest and coolest vineyard sites in California.

Calera Pinot Noirs are single vineyard designated meaning they are each named for and produced from fruit sourced from one vineyard each. Their five vineyards planted in Pinot Noir are named for Josh's father (Jenson), Mills, a neighbor who mentored Josh in his early years, Reed, for one of Josh's dear friends and early investors, and in this case Selleck, for a family friend whom Josh attributes to introducing him to wine. In 2002, the Ryan label appeared, named for Calera's vineyard manager since 1979. We've had fun with this wine collecting it for our #1 Ryan, serving it in celebration of his wedding a few years ago, and holding it in our cellar for special Ryan oriented occasions! The vineyards are enumerated and featured on the rear bottle label as shown left. 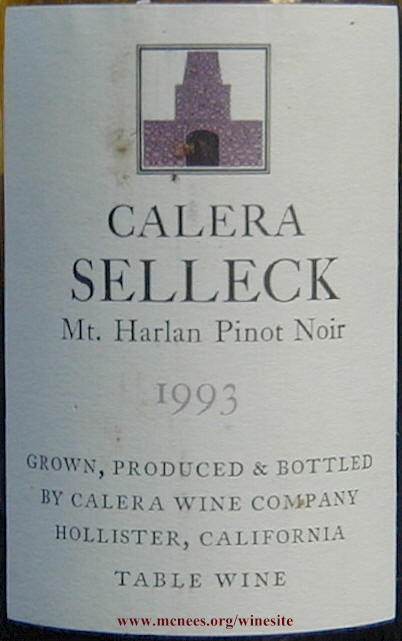 As in the great region of Burgundy which inspired Josh to pursue his dream of making great wines in the old world authentic style, he planted the varietals of Burgundy, Pinot Nor and Chardonnay. Calera states that wines produced from their Mt. Harlan Selleck Vineyard are concentrated and complex with aromatic perfume and minerality in the Burgundian style to meeting Josh's objective of creating wines in the style of the old world classics.

Found this 1993 Selleck in the back of the wine cooler, where it would have been staged, removed from the cellar for immediate drinking at some point. Thankfully, this is our last bottle of this vintage/label. Our tasting notes for this wine go back every other year to 2003, indicating we started drinking this wine in its tenth year. It is definitely beyond its drinking window, perhaps exacerbated by the fact it's a half (375ml) bottle (which likely aged less gracefully than regular or large format bottles. See my blogs about bottle sizes and aging.)

This '93 was light bodied, opaque slight rust colored, concentrated, slightly harsh, rather hard, raisiny black fruit that overtakes the black pepper, spice, hints of coffee and layer of leather. Still drinkable but not for the feint of heart. Drink it soon. Full size bottles may be less diminished from their aging.

Enjoy Calera wine, and the book!

Posted by UnwindWine at 5:45 PM No comments: