Following our discovery of the 2015 release of this label this summer and acquiring all the remaining inventory in local merchants, I had to special order the new vintage release. Unfortunately, and not surprisingly, after the accolades and positive reviews of the 2015 release, the market price for the 2016 increased 40% to obtain the new release.

This has happened so many times over the years, where a wine gains notoriety and dramtically increases its price as a result. Several times, one of our favorite regular drinkers increased in price such that it was no longer reasonable at the new QPR - Quality Price Ratio!

This may be such a case where this offered high QPR at the lower price point for the 2015 vintage, but the new release at the higher price is no longer a significant value. This point is exacerbated by the fact that I consider the new release less appealing.

Never-the-less, even at the new price, this is a reasonable price point and worth trying for a distinctive profile and character of wine. Such was the value of the earlier release!

Jeb Dunnuck - jebdunnuck.com  said of this wine, "There's 2000 cases of the 2015 Chardonnay Hungry Blonde, and it's one seriously good Chardonnay.  It's the real deal and will keep for 5+ years. At 30 bucks it's a killer value." He gave it 94 points.

James Suckling gave the 2016 90 points. "A chardonnay with plenty of butter, apricot, flan and bread dough. There is good density to this and the acidity gives some form and clarity'" 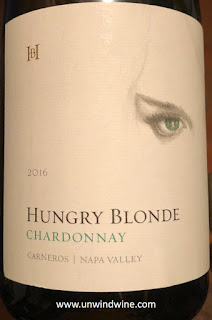 Winemaker notes for the 2016, "Our Hungry Blonde Chardonnay is the perfect expression of cool-climate Napa Valley Chardonnay from the Carneros region. Inviting aromas of lemon zest and white flowers make way for waves of bosc pear, Tahitian vanilla, and baked apple tart. All held together with fresh acidity and a supple texture inviting another sip."

I found the 2016 to be not as balanced or polished as the 2015 with a bit of an 'edge' that leaves it less approachable and easy drinking than the 2015. Perhaps with some further time in bottle it will soften, which remains to be seen, however I suspect it will not.


According to Wine Country Connection, Hungry Blonde is made by the well known Napa producer Cary Gott. The fruit comes from the Poe Vineyard, which sits adjacent to the world renowned Hyde Vineyard. Larry Hyde’s HDV Chardonnay, sells for $60.

I loved the 2015 - Full bodied, so buttery it emanated a sense of butterscotch notes. The 2016 is a nice sipper but not so captivating and extraordinary as the 2015 at its sub-$25 price point.

Pick some up, try it, and if you're lucky, you might get some 2015 and do your own comparison!

We took this BYOB to Chinn’s 34th Street Fishery in Lisle (IL). This under-rated restaurant specializes in the freshest seafood available. They offer “jet fresh” fish and shellfish from all over the world, flown in literally the night before from the seafood ports from around the globe. On the wall in the entryway are the bills of lading of the container shipments of fish from the airlines showing the shipments that came in that day with the selections offered on that day's menu. They pride themselves in providing the highest quality food at most affordable prices.

Another enticement of Chinn's is their liberal corkage policy of $10 corkage fee, which is appropriate for suburban independent restaurant dining.

This Chardonnay was ideal and a perfect match with our entree selections. I had the Halibut served sauteed over spinach and tomatoes which was delicious. I had a side of Pasta - Fettucini Alfredo, which was also delicious. 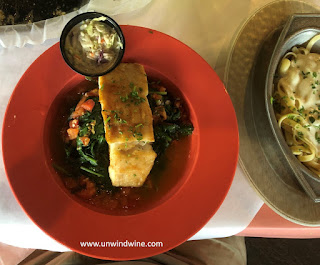 Linda had the Halibut tacos which were good with the ample avocado, tomato and spinach. 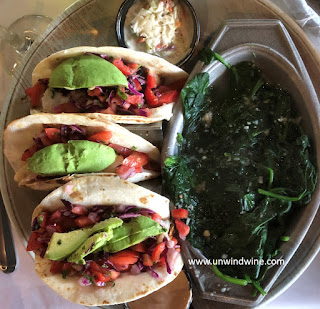 Posted by UnwindWine at 6:13 PM No comments: