The 1997 vintage was the theme for festive New Year's Eve dinner hosted by friends and fellow 'pour boy' Bill and Beth C, with Freemark Abbey being the headliner. Bill dipped in to his vertical collection to pull 1997 vintage bottles of Freemark Abbey Bosché and Sycamore Vineyards Cabernet Sauvignons. From our cellar I brought the Estate from the same vintage. And, to round out the horizontal tasting, I also brought a 1997 vintage Cornerstone Napa Valley Oakville Cabernet Sauvignon. The results were an amazing tasting experience. 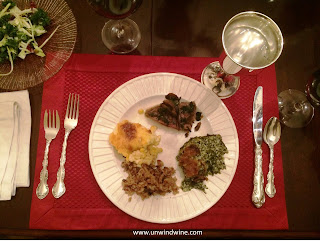 At this point, I should ask forgiveness for my obsessiveness in this analysis of these tasting results. This is what makes wine tasting fun for geeks like me (us), and perhaps so mysterious or annoying for the 'un' or less interested pedestrian bystander. This leads to, and is fed by deep and long experience in tasting these wines over a period of, and of wines from, literally, decades of time and vintages.

The results of our tasting were so consistent, I had to check my palate discrimination to see if perhaps I was impaired from medications I am taking from recent oral surgery.

Remarkably, all four Cabs exhibited a similar tasting flavor profile and signature, aligned serially in a gradation of weight and firmness along the same plane.

Also, interestingly, all four wines exhibited the same aging state or condition relative to the effects of their aging, being from the same vintage, and having had the same provenance. Indeed, upon opening, all four of the corks showed identical near perfection in their condition - still moist, firm, and clear of any diminution or seepage whatsoever - a testament to Bill's and our cellars and handling!

There is also a commentary here on the 1997 vintage and its ageability - all the wines showed 2015 as beyond or nearing the end of their drinking window. Yet, none of the wines were beyond their prime and were well within their drinking window, albeit none will likely improve with further aging at this stage of their life. The much heralded, arguably over-rated vintage is still drinking well at eighteen years, and may just now be revealing its true and native character.

The tasting profile for all four Cabs was remarkably consistent - firm, tight concentrated black currant fruit predominating accented with tones of black raspberry, tea and graphite highlights. Only the Estate Cabernet deviated with tones of bright cherry and red fruit competing with the black currant layer. None of the wines showed any diminution or adverse effects from their eighteen years in bottle aging.

All four Cabernets were concentrated, firm, tightly wound with bright focused fruits with gradations along the plane in terms of firmness, tightness and smoothness or polish. The order from low to high in relative weighting were: Estate, Sycamore, Bosché, then Cornerstone. 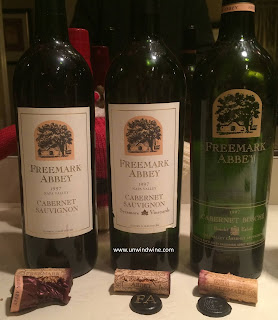 Perhaps what is even more remarkable is the fact that while three of the Cabs are from the same producer and label, two are from specific vineyards, the only common element being the vintage. It is possible that some of the same fruit from Bosche and Sycamore are blended into the Estate, but not likely much between the two. But, there is no explanation aside common vintage for the similarity between the Cornerstone and Freemark Abbey offerings.

All that said, paradoxical to the tasting observations was the lack of consistency in the color of the four wines, which was very diverse indeed, from ruby colored to dark garnet to inky black - yet with the same taste profiles as noted, across the range.

As always, I write these notes and set these conclusions based on memory, and our shared perceptions or interpretations expressed during the tasting session, but with no forethought, bias or influence from third party ratings or rankings. Only after I produce this commentary do I go back and review and compare other notes on the wines. Remarkably, my conclusions here are bolstered by and consistent with the community of contributors to Cellartracker and beyond.

There was some interesting confusion regarding this bottle. Based on my cellar records that showed this as Cornerstone Howell Mountain Cabernet 1997, I had advised Bill that was what I would bring to dinner. My records also showed that I had already consumed Cornerstone Vineyard Oakville Cabernet 1997 as well as bottle (s) of Cornerstone Cellars Beatty Ranch Vineyard Cabernet 1997. Since the bottle was wrapped in original packaging tissue paper, I didn't see the actual label until its unveiling at dinner tonight when it turned out to be this Cornerstone Vineyard variant. I have some other Cornerstone 1997 Cabernet (s) in the cellar, also wrapped in tissue. I now wonder which variant they are.

What an interesting comparison in two release variations of this label, revealing much greater diversity than one might expect. Bill's notes on the two offerings. 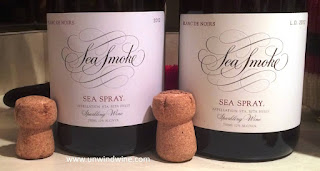 "Drank this along side last years original 2012 Sea Spray and the difference was a huge surprise. The LD was drier, more polished and complex, building on the fruit and brightness of the original 2012. Definitely my preferred style."

"Consistent with earlier notes, this opens with light strawberry and cherry on thepalate with a bit of toast on the finish. What was interesting is that we drank side by side with the newly arrived Sea Spray 2012 Late Disgorged. Surprisingly there was a noticeable difference with the LD showing more polish and complexity. The LD was drier for a start and had an additional yeasty layer that I believe, created the polish. The LD was definitely my preferred style and I was quite surprised by the difference."
WC 89 points.

Bill is more discerning and discriminating in reviewing these wines. While the difference was certainly discernible, my rating for the standard label would have been only a point, maybe two, less than the LD follow on.

Following dinner, Beth served chocolate cake and chocolate pecan pie. With the dessert course, Lyle brought and served Two Hands Lily's Garden Mclaren Vale Shiraz 2012, a great accompaniment to the course. We love this style of wine and with its full bodied, rich, concentrated thick tongue coating fruit, it can be a meal all in of itself! I would have loved to have tasted this opposite the cheese course and salad, to focus on the intense fruits. But the Sea Smoke was great there too. A wealth of riches tonight in our selection on offer. 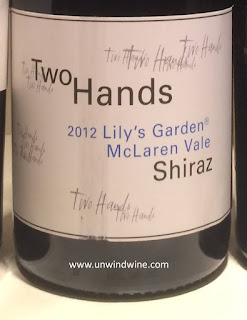 To say these wines are big is such an understatement, but hyperbole doesn't due justice to this big bruiser with its 16.5% alcohol. From the Two Hands super-premium, single vineyard collection, this classic McLaren Shiraz is named after producer co-owner Michael Welftree's daughter Lily born in August 2001. With our affinity for, and appreciation for such devotion and family orientation, I'll cast a different lens on this label in the future.

Posted by UnwindWine at 12:53 PM No comments: Links to this post