For the end of a tumultuous week, we treated ourselves to a dinner outing at our local neighborhood trattoria, Angeli's Italian. We took BYOB two bottle from our cellar, a latest vintage release of Lot 94 Ninety Plus Cellars Rutherford Cabernet to taste upon release, and an old reliable perennial favorite Robert Craig Affinity Napa Cabernet.

I write about our experience with Ninety Plus Lot 94 in a separate blogpost. 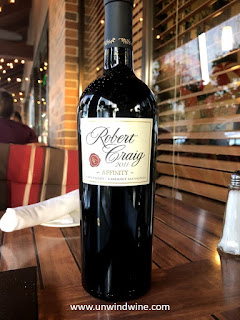 Over the next two decades Robert Craig expanded the portfolio and added at least five more Napa Valley Cabernet Sauvignons sourced from different vineyard sites from the two mountain ranges that line and form the two boundaries of Napa Valley.

We've enjoyed many visits to the Robert Craig estate and vineyards high atop Howell Mountain, and the early production facility up on Atlas Peak in the early early days. We've hosted Robert and Lynn Craig for several producer wine dinners over the decades.

As I write this I was reading the Craig blog on the Robert Craig website and just learned that Robert passed away last Sunday at his home in Tuscon with Lynn at his side. We're deeply saddened by this news and he will be missed. He was a wonderful, delightful man and a legend in Napa Valley since his emergence there back in 1990.  We have many fond memories of Robert going back to the mid-nineties. 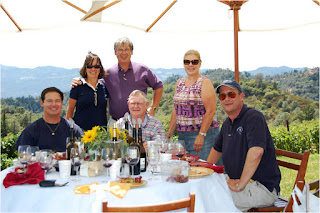 The 2011 vintage of certain Napa Valley appellations was marginal and some producers shunned the vintage altogether, or combined what would normally go into their grand vin with their standard estate bottling. The result was that some of the labels were actually extraordinary from an otherwise modest or lackluster vintage.

The 2011 Napa Valley Cabernet vintage was rated 86 points, the lowest rating in a decade and the only such rating in a span of a dozen years that averaged about 95 points or spectacular. The primary reason for the decline of the vintage was a rare rainy harvest that spared few producers resulting in modest or variable quality generally. 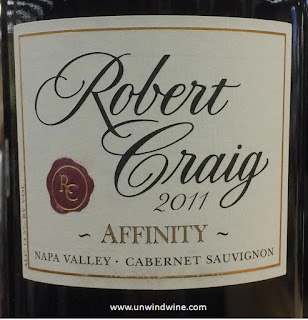 Robert Craig was always most proud of this label and strove to maintain it at a fairly priced affordable, high QPR - quality price ratio. As I have written in these pages, he has recently stepped down from stewardship and day to day duties of the brand that bears his name, and the new owners/managers have let the price of Affinity creep up precipitously.

Despite the lackluster vintage harvest across the region, this was quite good and exceeded my expectations. I wrote recently about the delights and great fortunes of often investing in lesser vintage releases. This may be another such case.

While generally considered a Cabernet due to its predominance in the blend, Affinity is actually a Bordeaux Blend comprised of the traditional Bordeaux varietals. The 2011 release is a blend of 76% Cabernet Sauvignon, 10% Merlot, 10% Petit Verdot, 3% Cabernet Franc and 1% Malbec.

Robert Craig's classic Affinity Bordeaux Blend is based on Cabernet Sauvignon grown at the Robert Craig estate in the foothills of Mount Geroge in Napa's Vaca Range. The firm backbone of Cabernet Sauvignon is augmented and enhanced with the small additions of Petit Verdot which adds a bit of color, Malbec which provides some weight, Cabernet Franc for structure,) and Merlot to soften and smooth the blend with a its more approachable mouthfeel. The blend is aged for 18 months in new and second-fill French oak, the resulting wine is powerful and ripe.

Posted by UnwindWine at 5:12 PM No comments: