For mid-week grilled tenderloin dinner we served this vintage Bordeaux Cru Classé from Château La Tour Haut Brion from the Pessac-Léognan appellation in Graves. The estate was located in the commune of Talence on the outskirts of the city of Bordeaux, adjacent to Château La Mission Haut-Brion. The label used to be a separate château under the same ownership as Châteaux Haut Brion and La Mission Haut Brion. The 5.05 hectares (12.47 acres) of vineyards were planted with 42% Cabernet Sauvignon, 35% Cabernet Franc, and 23% Merlot, a mix similar to Haut Brion. Production was about 2,000 to 2,500 cases per year. 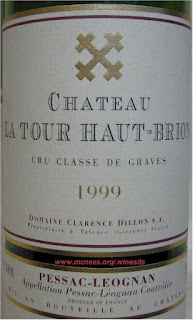 This was dark garnet colored, medium bodied with complex structure with black berry and black plum fruits with bright lively floral aromatics, accented by notes of cigar box, cedar, leather and subtle tones of dark mocha. This was an ideal complement to the grilled tenderloin steak.