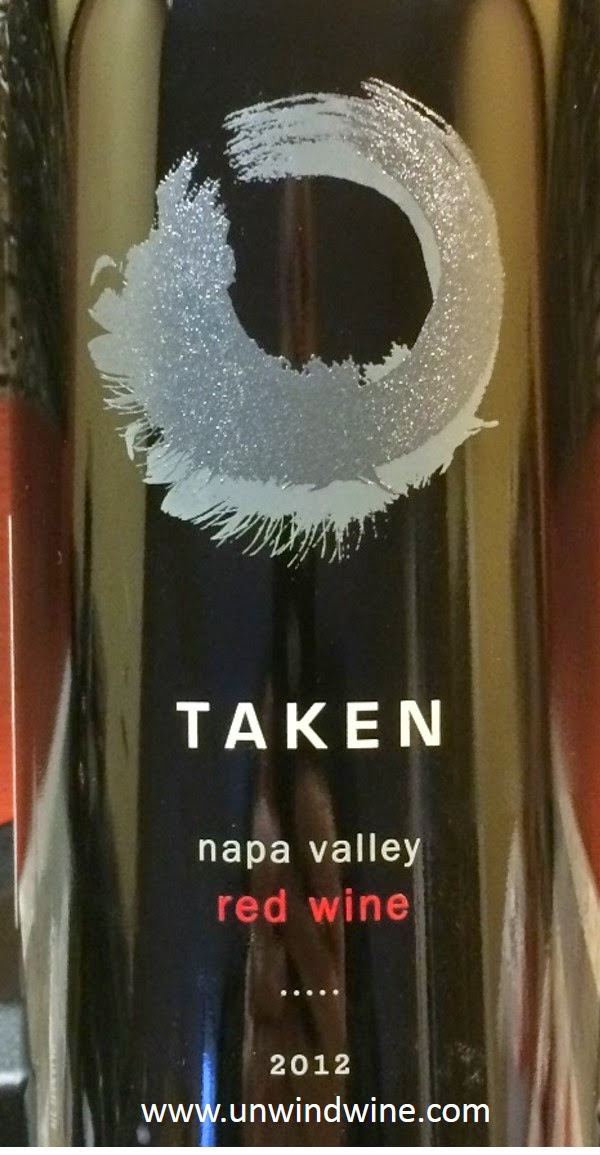 I discovered and wrote about this Taken Napa Valley Red Wine after a recent trip to New York, when I found this high QPR Big Napa Red in several wine merchants. Taken is a joint venture between  Josh Phelps and Carlo Trinchero, two well known family names in the world of wine, next generation producers from at least one wine making family known for Swanson Vineyards and Trinchero Family Estates, which is one of the largest wine producers in the US. (Its not certain that Josh is related to that Phelps).

I went back to Buy Rite Wines and Liquors in Jersey City where they had a few bottles left of the 2012 vintage, which I picked up for a BYOB dinner with son Alec and friends Liz and Ryan, a short walk from his flat in Hoboken at Cafe Michelina Italian Restaurant.

As I wrote last month, this 2012 Red Blend reflects the much heralded vintage in Napa Valley, which benefited from an ideal growing season - rainfall in the spring, optimal temperatures in the early summer with warm days followed by cool nights, through to an early October harvest. Yields were high and the fruit was high quality.

It was a great year to be in the wine business, and to be a consumer, since high quality wines should be in abundance that should result in some great value high QPR - Quality to Price Ratio wines. Taken Red Blend emerges as such a find! It is a blend of 60% Cabernet and 40% Merlot of Napa Valley fruit, aged in French Oak Barrels.

From a packaging / branding perspective, readers of this blog know I buy, collect and drink a lot of wine, and this Taken release is packaged in a heavy oversize bottle that has the biggest 'punt' I have ever seen - seemingly larger than the size of a shot glass.

The "punt" is the concave indentation in the bottom base of the bottle. In old days, glass bottles were made by hand and this was a result of the glass making process. Today, glass bottles are mass produced using molds, so the punt is no longer a function of the historic primitive process, but rather part of the bottle design.

Most white wine bottles are produced with flat or mostly flat bottoms, while most red wine bottles are still made with punts. It is generally believed that the punt helps separate and collect the sediment down in the bottle ring, so that it doesn't pour out with the wine into the serving glass or decanter.

This Taken release was a great accompaniment to Cafe Michelina's hearty pasta dishes - the crab and lobster stuffed pasta in vodka cream sauce, and the rigatoni with meat sauce and ricotta cheese.

Dark inky purple colored, medium to full bodied, intense concentrated forward ripe blackberry and blueberry fruits accented by layers of dark chocolate, anise and expresso with tones of graphite, earthy notes, and hints of vanilla and sweet spicy French oak. Only a bit of heat from the 14.5% alcohol and the graphite tone detract from the balance and polish of this wine.

Posted by UnwindWine at 10:00 PM No comments: