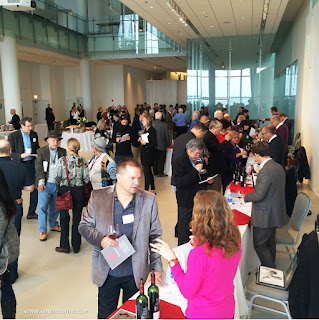 As with the last couple UGC Bordeaux US Release Tasting Events in Chicago, the 'Pour Boys (TM)' wine group served at the Grands Crus Classes of St Emilion 2015 Chicago Tasting. More than two dozen producers visited Chicago to showcase their 2010 and 2012 vintage releases to the wine community.

The 2012 vintage was one of extreme conditions early in the year, very cold winter, hot dry March, cold wet April. Once ripening began, conditions resembled the classic 2000 vintage - rain then drought, and good weather through September and early October. From mid-month, heavy rains came, rewarding those that had picked early. It is said that 2012 illustrates the premise that good wine is made in good vineyards by good vignerons. (Whereas in 'ideal' years, all boats rise with the tide.)

Once again the event was organized by Napa based Balzac Communications. The venue for this years event was the spectacular VenueSix10 overlooking Chicago's lakefront and Grant Park.

The Association de Grands Crus Classes de Saint Emilion (AGCCSE) was formed in 1982 by Crus Classes growers to jointly promote their own wines and those of the region, and to collaborate to achieving ever higher quality. Saint Emilion is a medeivel town founded in the 8th century, 40 km northeast of Bordeaux, 8 km from Libourne. There are 13500 acres of vineyards (half the size of Napa Valley) in two appellations, St Emilion and St Emilion Grand Cru. 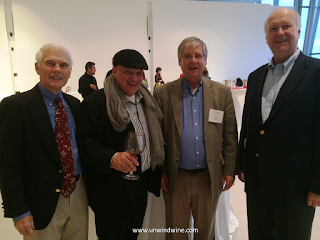 The 'Pour Boys' attending were me, Dr Dan, Ernie and Lyle, from our group of wine collectors who conduct regular wine dinners and special events, named such as a result of our service at these events. Other regulars, #1 Son Ryan, and Bill C were unable to participate.

These wine adventures are much of the basis and content of this unwindwine blog. As written in these pages, this started when East Coast winter snowstorms disrupted flight operations preventing more than a dozen producers from getting to the event a few years ago. The 'Pour Boys' were called in to service to stand in and pour those wines. Then, when it happened again the following year, this tradition was born.

Events such as this give us pedestrian wine collectors a chance to mix with the Producers and members of the wine trade, to learn, and share fine wine passion, experiences and adventures, and for them to talk with serious collectors/consumers. This week's event was fitting as Dr Dan and Lyle just returned from two weeks touring the French Rhone Valley. 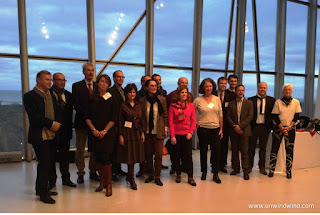 What a privilege to meet the representatives from the producers of St Emilion. Kudos to them, Virginie Larramona, (below left) Executive Director, and Alain Moueix, President of the Association, and the Balzac team for orchestrating a wonderful event and an impressive turnout (left) of the member Chateaux.

Thank you all for coming to our fair City, Chicago.


This event featuring the Grands Crus Classes of Saint-Emilion provided a  wonderful opportunity to explore and experience a comprehensive and in-depth exposition of the people and their wines across the appellation and the nuances and wonders of its different terroir - the southern slopes, the plateau, northern slopes, and the gravelly areas. This rare glimpse into the geography and distinctive terrior matched with representative wines showcased and highlighted their individual style and character of each area.

Some of the discoveries of this event were Château Jean Faure with its unique blends featuring 54% Cabernet Franc, the unique showing of Château Grand Corbin-Despagne, meeting Charles-Antoine Beyney and tasting their spectacular releases of Château Clos De Sarpe, meeting Guy Meslin owner of Château Laroze and learning of their heritage and legacy, and meeting Sylvie Cazes, the new owner of Château Chauvin, and serving Château Yon-Figeac.

Notable tastings of the day:
The wonders of St Emilion are manifested in the rich wonderful heritage of the properties such as Château Laroze, where Guy Meslin of the Meslin family, are direct descendants of the founders, who are recorded as producing wine in St Emilion as far back as 1610. In 1882 ancestors of the family bought and combined 37 acres of three small vineyards, and founded the family estate of Laroze. They built the chateau with its cellars and vat house in 1885.

Successive generations lead to George Meslin who ran and developed the estate for 40 years, organising it under its current name, increased its size, and built its sales network and the quality of a Grand Cru Classé. Building upon the efforts and legacy of him and earlier generations, Château Laroze was awarded Grand Cru Classé status in the 1955 Saint-Emilion classification. On the retirement of his father, Guy Meslin took over the family estate in 1990. Under his leadship, they continued to modernize the estate and expand the facilities.

Today, eighty percent of production is Château Laroze exported as distribution is growing in the US. Watch for it.

Afterwards, we dined at Chez Joël Bistro Francais on Taylor Street, Chicago, one of our favorite regular spots, often pregame dining before Hawks' and Bulls' games. 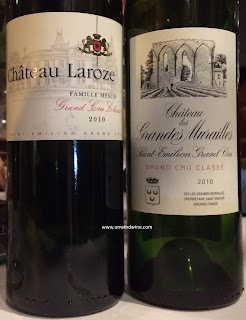 Posted by UnwindWine at 6:05 PM No comments: Links to this post