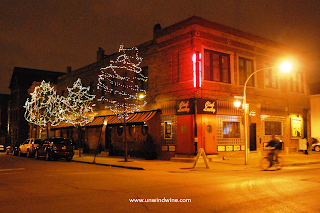 To celebrate Michelle's Ides of March thirtieth birthday, and their expecting daughter, Ryan booked a gala dinner at neighboring Club Lucky in Bucktown, Chicago. They did a great job accommodating our group of 16 and handling our BYOB special selections commemorating Michelle's birthyear, the year they met, and their anniversary year. Service was superb especially considering our large group and our special handling of our wines.

The food was equally spectacular, even including the anti-pasta salad and grilled calamari starters. The chef's selection Tortellini with asparagus and chicken was good but outclassed by the regular feature Tortellinis filled with chicken and herbs with english peas and pinenuts in vodka cream sauce. The Salmon Oregatano was also very good, served Mediterranean style with white wine, oregano, Italian parsley, fresh lemon and potato wedges. I opted for the Rigatoni with veal meatballs baked with escarole, fresh mozzarella cheese, and marinara which went superbly with the Viader Red wine blend. 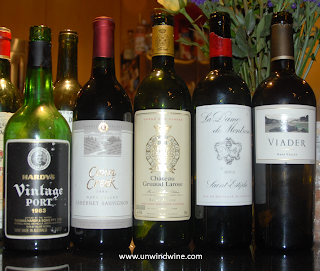 While we've been fans of the Cordier conglomerate's Chateau Gruaud Larose from the St Julien appellation since the early 80's and hold a deep vertical selection of this wine in our cellar dating back to 1978, its been especially rewarding and great fun to be a part of son Ryan's discovering this wine. The highlight and one of the events contributing to this was tasting the 2010 vintage while meeting David Launey the winemaker taste the new release with him at the Union des Grands Crus de Bordeaux Chicago 2010 release tour together. Ryan and I are now on a discovery tour of our own discovering/revisiting this wine together. Regrettably I didn't have any 1983's left to bring tonight although we still have magnums or double magnums of 1981, 1982, 1985, 1989 and 1990 releases. The 2001 didn't disappoint, in fact was a surprise in its accessibility, suppleness and forward fruits.

Ironically, like the 2010, this was surprisingly expressive and vibrant for a Gruaud Larose, medium full bodied, deep purple color with full forward black and red berry fruits and classic left bank Bordeaux nuances of floral, subtle earth, leather and smoke leading to a layer of cassis, oak and exotic spices, ending in silky smooth polished tannins on a firm lingering finish.

Lacking the pedigree of the almost super second Gruaud Larose, this second wine of St Estephe producer Chateau Montrose, while not as complex, concentrated or polished, presented itself respectably well. The 2008 second label La Dame de Montrose was 28% of the estate’s production. The blend is surprisingly 56% Merlot and 44% Cabernet Sauvignon.

Deep ruby purple colored, medium to full bodied, the focused but somewhat subdued dark berry and currant fruit gives way to a layer of mineral and smooth soft tannins on the finish. 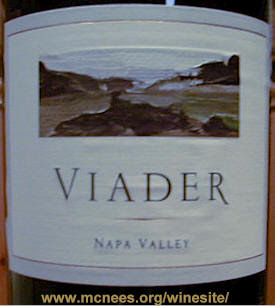 We also enjoyed this wine with the producer at An evening with Delia Viader back in late 2005 in Chicago. We then visited the property up on Howell Mountain during our Napa Howell Moutain Wine Experience - Viader back in 2008. This was my run away favorite of the evening although this might come across a bit sweet for some, it reflects a style that is most suited to my preference - bold, forward, expressive fruits with sweet nuances of oak, mocha and spice - very true to the Howell Mountain terrior. Interestingly, Viader, sitting at an elevation of 1200 on lower Howell Mountain, is designated Napa Valley appellation. The Howell Mountain appellation starts at that level which is the highest elevation point that the overnight and morning fog reaches.

After dinner we retreated to Ryan and Michelle's where we had artisan cheeses and desserts with fresh fruit - Bellavitano with French Bread, artisan cupcakes, and Linda's rich chocolate mousse with fresh berries. To accompany these we opened a Hardy's McLaren Vale South Australian vintage port blended from old vines shiraz.

Although the cork was very soft and spongy and the fill level was nearing the bottom of the tall neck, the color was ruby colored although it was slightly murky, yet it tasted fine - super ripe red and black berry flavors, hints of dark mocha, almost raisiny fig flavors, blackberry liquor tones, anise, a layer of soft sweet essence of brandy and a sweet aftertaste on the lingering finish.

Posted by UnwindWine at 10:32 PM No comments: