Medium to full bodied, classic left bank aromas and flavors of floral violets, leather, tobacco and slight earthiness, herbs and hint of tar accent the blackberry and black cherry fruits on the lingering full floral moderate tannin finish. Decanted for an hour before drinking, it initially had a bit of barnyard funkiness but this burned off over the course of two hours to reveal its native character. A nice surprise in the staying power of this wine still in its drinking window albeit past its prime and beyond any chance for improvement through further aging, it still has several years of life left.

Ryan brought these two 2007 vintage bottles to share/taste. The St. Julien Bordeaux prompted me to pull the Chateau Talbot for a terrior comparison tasting. When I bought these back in the eighties, I considered Talbot as a poor man's Gruaud Larose. It certainly presented itself like a big hitter tonight!

While the Larose De Gruaud is a lesser second label of legendary Gruaud Larose, this wine resembled the Caparone moreso than its 'cousin' the Talbot, aside the difference in vintages. I say cousin because back in those days, both were properties whose wines were marketed by the Cordier enterprise and labeled as such. Today, Chateau Talbot is still owned by the two daughters of Jean Cordier, earlier patriarch of the company,

Not to be confused with their second label Sarget De Gruaud Larose, this wine is sourced from younger vines not considered ready for premier use in the first and second labels.

This was especially fun to taste this with Ryan following our encounter with Gruaud Larose winemaker David Launey when we taste their vintage release at the Union des Grands Crus de Bordeaux Producers' 2010 Release Tasting in Chicago back in January.

These are two great pizza or barbecue wines. Both provide good QPR - Quality Price Ratio's at their sub $20 price points. . 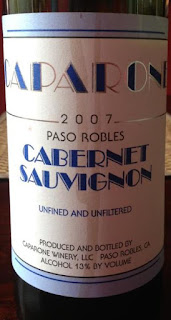 Ryan's notes from Cellartracker on the Caparone:

I'm very impressed... what a bargain. very interesting wine. I don't have lot of experience with Paso Robles, but now I'm very intrigued.

This reminded me a 2001 Gruaud Larose I drank a couple months ago. when I closed my eyes, i was envisioning that wine. keep in mind, this was 20% the cost!

Color - showed some moderate bricking, which was really concerning upon pouring it. i'm wondering if this wine may have been flawed in a strange way that actually improved it.

Nose - earthy and kinda musty, with smoke and leather.

Mouth - smoky, with tar and leather, and red fruit. as mentioned above with the GL similarity, it tasted a lot like a 15 year old St. Julien. drank over several hours and after about 3 hours it starting showing another layer of fruit that was really nice.

Posted by UnwindWine at 2:02 PM No comments: