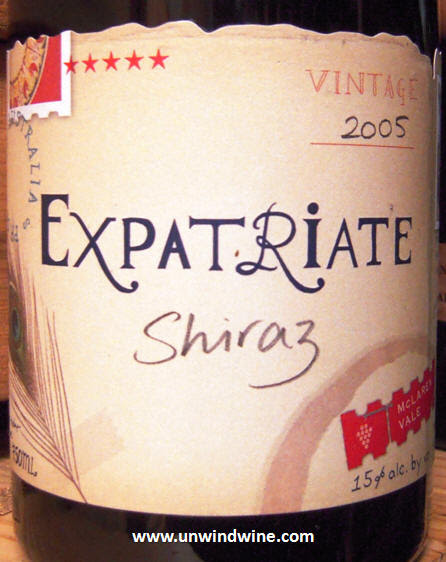 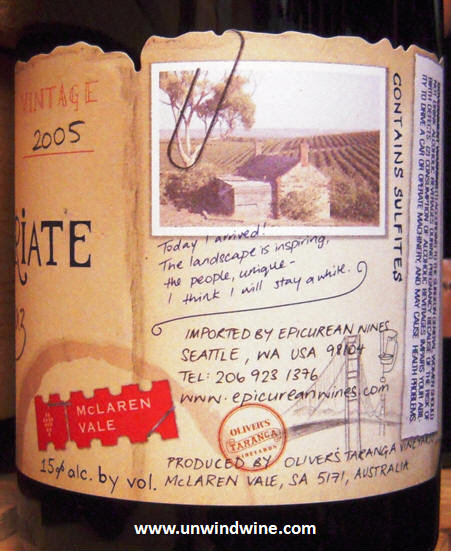 #1 son Ryan and I each picked up a bottle of this Expatriate Shiraz when out wine shopping together so when he opened his he stopped by to share and taste it with me. This is attributed by name to Corrina (nee Rayment) Wright, Winemaker & Director of 170 year old fifth generation Olivers' Taranga Vineryards.

This McLaren Vale Shiraz is packaged in an extra heavy glass bottle with the largest or deepest punt I have ever seen. (The punt is the dimple in the bottom of a wine bottle. Historically they were there to strengthen the glass, particularly useful in the case of sparkling wine which builds up pressure in the bottle. It also was put there to provide stability for the bottle, artifacts from the earlier days of glass making. The other reason its there that has value today is to collect and consolidate sediment deposits at the bottom or side of the bottle (depending on how the wine was stored) to separate it from the juice to ease in decanting.)

Expatriate sports a whimsical Oliver's Taranga label inscribed with handwritten journal notes about 'arriving in wine country and deciding to stay awhile', as if from a foreign 'Expatriate'.

Full bodied, dark inky purple, dense, concentrated and tongue coating richness predominates with blackberry fruit, hint of blueberry tones and black olive giving way to a slightly awkward tinny mineral layer before an oaky vanilla nuance on a firm lingering tannin finish. The forward fruit is a bit tightly wound and comes across a little disjointed and unbalanced that diminishes the experience. It would be great at $30 but at $60 one expects more polish and refinement.

Posted by UnwindWine at 6:25 PM No comments: