This is starting to appear like the Frank Lloyd Wright (FLW) wine site with this being our fifth FLW tour event capped by a wine-dine dinner outing in recent months.  Here is the posting on my FLW Prairie Architecture WebSite on our Wright Now Tour, which we finished with a dinner at Le Bouchon French Bistro in tony Bucktown in Chicago, walking distance from our kid's condo there. L and I have dined at their sister restaurant La Sardine, opposite the (former) Harpo Studio, several times but this was our first visit to Le Bouchon. Bill and Beth celebrated their anniversary there. 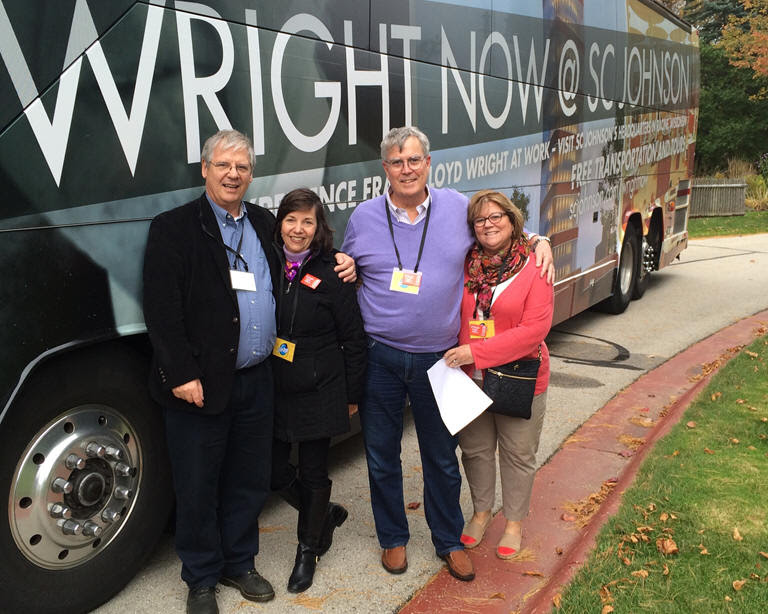 This was a particularly special outing since our friend Bill C's grandfather was an executive with SC Johnson during the time the company was engaged with Mr Wright to develop the project. He had many opportunities to meet with the legendary Wright during that time. Bill holds a library of memorabilia from those encounters. What a wonderful surprise when we discovered during the tour of the SC Johnson HQ research tower, a display of a vintage Life Magazine article featuring the building. Featured in the displayed magazine is a picture of Bill's grandfather, W C Connolly, advertising executive of SC Johnson, standing in the Wright designed building with Herbert Fiske Johnson, then President of SC Johnson.

Our follow on tour of the spectacular Wingspread was punctuated by reminiscences of Bill recalling visiting there as a child. 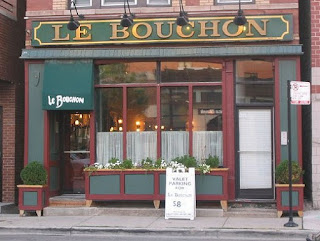 Bill and Beth took a BYOB wine to enjoy with our picnic lunch on the tour, and I took a couple BYOB selections for dinner afterwards. We dined at Le Bouchon Bisto, boisterous and crowded yet cozy and chic, as authentic as it could be, as if one were transported to Paris or a Provencal village.

While we found their $50 corkage fee prohibitive to open our carry-in, we enjoyed an authentic haute cuisine dinner with a couple selections from their French centric wine list, two diverse styles that each complimented the courses of our dinner perfectly. I normally might rail about such an exorbitant fee, but I won't. With their small venue and its limited seating, they don't have high volume to offer BYOB, thereby reducing their revenue per diner. Moreover, they offer an appropriate thoughtful selection of reasonably priced wines to compliment their extensive menu selections.

Bill selected the 2008 Vosne-Romanée, Domaine Dominique Mugneret which went well with the salad and starter courses - the Mousse of Duck & Rabbit Livers with Fig Jam on Sourdough, the apple salad, French Onion and seafood bisque soups. 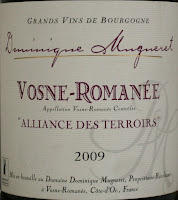 Opaque medium-light bodied, ruby colored, moderately tart cherry and cranberry fruits with hints of  pepper spice and some dusty earth. This was favored by Bill and the ladies. We've enjoyed Château Coutet at the UGC vintage release tastings as well as an aged vintage of their dessert wine at our wine dinner tastings. This is a right bank wine with a left bank character and feel with its dark garnet color, medium body. smooth polished but rustic gripping mouthfeel, dark berry and cherry fruit with crushed rocks, graphite, dusty leather and pepper on the nose and palate finishing with smooth soft tannins. I prefer this bigger, more robust style, especially with our beef entree.

Posted by UnwindWine at 6:54 AM No comments: