Traveling to Madison, WI on business, I dined with a client and took this Columbia Valley Syrah BYOB to dinner. I found this single vineyard designated Syrah at the local Verona Wine Cellars wine shop. Being out of state, and in a small tertiary market presented discovery of small production labels such as this, that I haven't seen in distribution, perhaps because they would not meet the volume demands of our larger wine retailers in the Chicago metro marketplace. 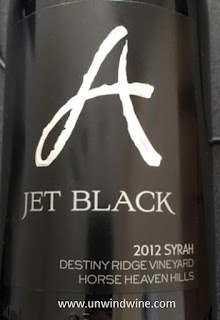 The owner/producers of Alexandria Nicole Cellars are winemaker Jarrod and wife Ali (Alexandria Nicole) Boyle, who produce small lots of hand-crafted estate wines, meaning wines sourced from their own 327 acre property. They planted their vineyard's first vines in the fall of 1998, and built their winery in the fall of  2004.

Posted by UnwindWine at 8:36 AM No comments: Links to this post 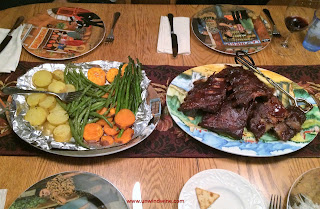 With son Alec and Viv home for a post-holiday dinner, I pulled a 'V' bottle for Viv, Venge Merlot for her request for a Bordeaux varietal. I also pulled a bottle of Mr Riggs McLaren Vale Shiraz of the same vintage, 2004, to accompany Linda's dinner featuring Ditka's BBQ ribs, roasted potatoes and sweet potatoes, asparagus (shown left) and her delectable baked brie pastry with fresh berries, roasted pecan nuts and honey (shown below). 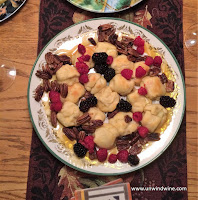 I must admit, this bottle exceeded my expectations.  Wow, I wish I had more of this. At a dozen years of age, it seemed to be at its prime, the apex of its drinking window. Winemaker Kirk Venge was prescient when he said back upon release, "This wine will drink well now through 2016."

Normally for BBQ ribs, I would select a hearty zinfandel or big rich shiraz, which was our second wine, but this was delicious with our opening course of artisan cheeses, Swiss, Bellavitano and a big bold Blue which served as the transition to the BBQ.


We visited the Venge Vineyards estate in Oakville several times starting back in the nineties when legendary patriarch Nils Venge was working the vineyards and operations, and up at their new Rossini Ranch in 2002 when he was working with son Kirk setting up new vineyards, cave and operations in the eastern foothills of the Palisades Mountain range up in Calistoga (shown right).

Nils Venge purchased the 7-hectare (17-acre) vineyard in Oakville in 1976 and planted it in Cabernet Sauvignon and Merlot. Kirk continued his father's legacy, taking over ownership of Venge Vineyards in 2008. He purchased and developed the vineyard in Calistoga, where the winery stands today. 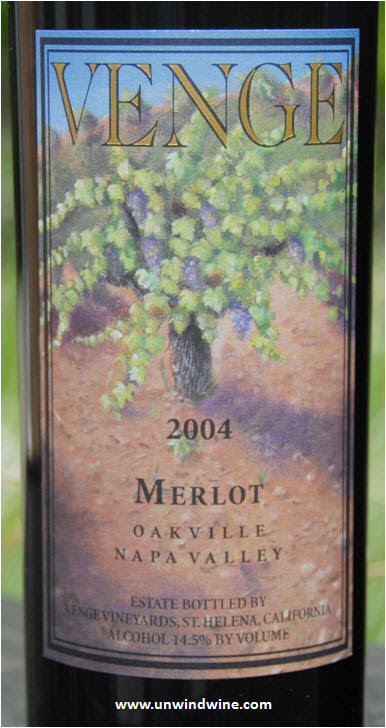 We visited the new site during the time they were digging the cave out of the side of the mountain in 2002. Venge's family run operation now involves three generations and has grown to produce a large range of wines sourced from multiple vineyards around Napa Valley and Sonoma. Venge's main focus is full-bodied red blends such as their Zinfandel-based blend Scout's Honor, named for the family vineyard dog, and the powerful flagship Cabernet Sauvignon Family Reserve, sourced from the Oakville Estate.

This 100% merlot was sourced from Oakville. It is dark blackish garnet and purple colored, medium to full bodied, refined, polished and elegant, bursting with floral perfume and sweet candied red and black fruits, accented by flavors of cola, dark cherry and hints of cocoa and vanilla, almost approaching caramel. Kirk compares this wine to a fine Pomerol (right bank Merlot based Bordeaux). This is structured, yet silky and seamlessly balanced, turning to ripe gripping but smooth tannins, modest acidity and rich texture on a lingering polished finish.

http://www.vengevineyards.com/
Posted by UnwindWine at 7:24 AM No comments: Links to this post