This is produced by Jeff Cohn, former winemaker at Rosenblum Cellars in collaboration with Yves Cuilleron from the Northern Rhône, third generation proprietor of Cave Cuilleron founeded by his grandfather Claude Cuilleron in 1920. Yves took over in 1987 from his Uncle. The 150 acre estate produces over 430000 bottles of wine annually. Jeff Cohn and Yes Cuilleron teamed up in 2013 to produce this wine in the historic Northern Rhône style from fruit sourced from Cohn's Rockpile vineyard. Through their collaboration they have crafted this wine in the style of a Northern Hermitage or Côte-Rôtie.

Fruit for this label is sourced from the Rockpile vineyard in the Rockpile appellation in Sonoma. Cohn calls it "a special place for Syrah". Sitting at 2010 ft. elevation, Syrah 20 plus year-old vines are grown above the fog line allowing for plenty of sun to reach full ripeness. The vineyard gets its name from the rocky soil that stresses the grapes resulting in richness and concentration. Jeff began working with the Rockpile Vineyard over fourteen years ago.

While working at Rosenblum Cellars, Jeff Cohn began his own Jeff Cohn Cellars label in 1996. His first vintage was but 75 cases in of 1996 Rhodes Vineyard Zinfandel. Production at Jeff Cohn Cellars slowly increased to over 5,000 cases annually.  In 2006 Jeff parted ways with Rosenblum to focus exclusively on his own winery, but not before crafting the 2003 Rockpile Road Zinfandel, which placed 3rd on Wine Spectator’s Top 100 list that year. This was a milestone accomplishment not only for Jeff, but the entire California winemaking industry, the first Zinfandel to appear so high on the list, the first time for a Zinfandel from California to reach the top ten. 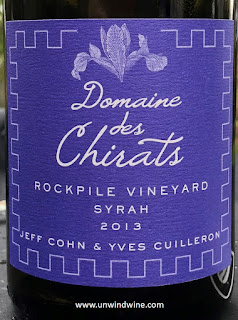 Jeff strives to achieve the aspects of terroir and minerality found in France's legendary historic winemaking regions in wines sourced from California fruit. He has traveled across California, from Santa Barbara to Mendocino, searching for the finest fruit and the best vineyards. Among Jeff's most important discoveries was the Rockpile region in Sonoma where he began sourcing Syrah grapes for a portfolio of wines including this label. He strives for elegant and complex wines and he believes the craggy soil of the aptly named Rockpile produces some of the most complex and distinctive minerality in all of California.

The 2014 vintage of this wine was rated 95 Points by Robert Parker.

Posted by UnwindWine at 8:24 AM No comments: