For Friday night casual dining we opened this Central California Coast Pinot Noir from Presqu’ile Vineyard, grown in the Santa Maria Valley, a narrow ribbon of land between the Pacific Ocean and the San Rafael mountains, an area known for producing elegant Pinot Noir.

The Presqu’ile Vineyard 200-acre property was developed in 2007 by founder/producer Matt Murphy and his parents, Madison and Suzanne after an extensive search up and down the West Coast searching for an ideal property to produce Burgundian varietal wines, before selecting the property in the Santa Maria Valley.

The Murphys teamed with Santa Barbara County Vineyard Manager Jim Stollberg and Winemaker Dieter Cronje to develop the Presqu’ile Vineyard estate. They mapped the site's deep sandy soils, distinct airflows, patterns of sunlight, hillside angles and elevations. With the insights derived from these measurements, they planted the vineyard to maximize the diversity of row directions, spacing, clones and rootstocks. They added an additional adjacent 11-acre parcel of Pinot Noir vines planted in 2001. The resulting Presqu’ile Vineyard consists of 73 total acres of vines; 32 acres of Pinot Noir, 17 acres of Chardonnay, 16 acres of Sauvignon Blanc, 6.5 acres of Syrah, and 1.25 acres of Nebbiolo.

The site is located in the Santa Maria Valley American Viticultural Area (AVA), established in 1981, making it the second oldest AVA in California after Napa Valley. It is also one of the world’s most unique AVAs which, along with the nearby Sta. Rita Hills, lies in and benefits from the only two transverse mountain ranges on the entire West Coast of North and South America.

Framed between the San Rafael Mountains to the north, and the Solomon Hills to the south, this geographic feature creates a natural funnel, drawing in cool marine air from the Pacific. The ocean temperatures just off the coast of Santa Maria are typically only about 55˚ to 59˚ F, further cooling the ocean breezes funneled into the valley. The resulting average temperature at just 64˚ F, creates a cool-climate viticultural region with one of the longest winegrowing seasons in California (125 days on average).

Matt grew up in Arkansas in a family that for four generations had been growing corn, soy and rice. He often spent harvest season working the family’s farm in neighboring Louisiana. The family were also wine lovers and he was exposed to fine wine at a relatively early age, including many of the great wines of Burgundy.

While studying biology at the University of Colorado at Boulder, Matt followed his appreciation of fine wine and worked a summer at Signorello Estate in Napa Valley where he found a love for working in the vineyard and learning the craft of making wine. Our visit and tasting at Signorello was one of the highlights of our Napa Valley Wine Experience back in 2013.

After university, Matt headed west, and took a position in the cellar at Santa Maria Valley’s Ambullneo Winery where he became good friends with Ambullneo’s talented assistant winemaker, Dieter Cronje. The two teamed up to pursue their shared philosophies about winegrowing and winemaking, and the potential of the Santa Maria Valley to make cool-climate wines. 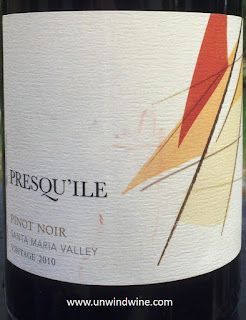 
The winemaker notes for this release; "On the nose, we get aromas of forest floor, cherries, anise, sandalwood and classic "Santa Maria spice." Flavors of rich, red cherries, plum and cola are presented with exceptionally fine tannins, balance and integration. This Pinot Noir will continue to develop complexity for years to come."

This was ruby colored, medium bodied, bright floral bouquet with fruits of cherry and black raspberry with dusty rose, spice, hints of mushroom and soy with a balance of acid and fine smooth tannins on a lingering finish.

This got 92 points from Burghound.com.

It was aged seventeen months in French oak barrels, 35% new.