For Sunday Brunch after church, the family gathered for a customary Sunday dinner. Son Ryan brought over this Cune Rioja Reserva Tempranillo Blend he had open from the previous night to share/taste. I don't do much Spanish wine and we hold only a few labels in the cellar but I would rate this one a great QPR (quality-price-ratio) good value buy and I'll definitely pick some up. This would be fun in a blind tasting as it almost tastes like a Medoc rather than a Rioja.

Cune is actually named after the initials of the production company, C.V.N.E. (Compañía Vinícola del Norte de España). the first wine of this winery to do so. By their testament, this is produced in the style of "a red ‘clarete’ wine was made as a fine wine in the style of the Bordeaux “Claret” produced by the great chateaux’s of the Medoc." 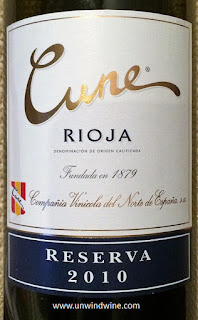 CVNE is a large producer with 545 hectares (2.2 acres/hectare) of vineyards in the two subregions of Rioja Alta and Rioja Alavesa, that make up just 50% of the company's overall production. The company also produces wines under the historic Viña Real brand that in the 1920s pioneered making crianza wines in oak barrels in this area, and Contino.

Contino, the company's first Rioja château was built in 1973 on a  62-hectare site in the Rioja Alavesa. The history of the property dates back to the 16th century. The wines take advantage of the Atlantic-Mediterranean climate of the region.

The CVNE winery complex is comprised of 22 buildings dating back to 1879, with a historic plant that was actually designed and built by the famous French Eiffel architectural studio in 1909. In 1940 CVNE pioneered the construction of the first concrete fermentation cellar in Spain and the first to use gravity fed vinification processes in the 1980's.

This is an interesting legacy that warrants further exploration into this producer and their wine portfolio of brands.
C.V.N.E. (Compañía Vinícola del Norte de España) Rioja Reserva 2010

This is a blend of Tempranillo: 85%, Grenacha, Graciano and Mazuelo 15%.

Posted by UnwindWine at 8:07 PM No comments:

I admit I've never been a huge fan of Justin Isosceles, finding the Paso Robles terroir impact a bit too brambly for my preference. So it was with a slight bit of skepticism that I tasted the 2013 at Binny's Friday night table tasting. Wow. Not only was this the most impressive Isosceles in memory, it was truly exciting and memorable. I'd consider this a must buy for those seeking a premium Cabernet Blend for this vintage, or at least a must try.

Isosceles of course if the flagship wine of Justin Vineyards and Winery since 1981, from the mountains above Paso Robles between the City on Hwy 101 and the Pacific Central California Coast. Since 1981, producer Justin Baldwin has tended 160 acres of Bordeaux varietals Cabernet Sauvignon, Cabernet Franc and Merlot.

This 2013 is an eye opener for me and puts Paso Robles and Justin Vineyards and Winery on the map as a producer to pay more attention to, and as a wine discovery adventure destination. In the meantime, pick up and try this impressive release.

Producers Notes: This sums it up very well and is worth noting.

Palate: Dry and full-bodied with rich black cherry and blackcurrant fruit, vanilla, cinnamon and licorice spice notes on the entry. Savory, herbal and mint notes appear, followed by dark chocolate and smoky oak elements on the mid palate. The finish is very long and crisp with a complex interplay between the savory mid-palate and returning fruit of red cherry candy and sweet spice with a floral hint of violet, all framed by soft, chewy tannins. The 2013 Isosceles is drinking exceptionally well at release but has the structure to further develop beautifully over time. Great with classic cab fare like rich braised short ribs or grilled leg of lamb with garlic and herbs, the 2013 Isosceles also drinks well on its own due to its exceptional balance of flavor and texture even when young.

This was truly unique in its character and flavor profile. I was taken aback by the bright vibrant expressive cherry and black currant fruits punctuated by a luscious floral perfume of silky sweet cinnamon with hints of vanilla and mocha chocolate on the smooth lingering finish.

This is Justin's Right Bank Bordeaux blend, being Merlot based vs. Left Bank Cabernet predominant. While Merlot typically would be slightly softer and more mellow than more forward Cabernet, this is actually mostly Cabernet Franc which is put into Bordeaux Blends for punctuation of spice and bright bold sprites. Voila! With its Cab Franc core, this is bright, tangy spicy and expressive. This is more the style that I associate with Justin red blends.

Once again, as above, I offer the Producer's notes on this wine.

COLOR:  Deep ruby purplish core lightening to medium intensity at the rim.
AROMA:  Ripe red cherry, blackcurrant and just-rip blackberry, with rich vanilla and cinnamon spice and an attractive savory and herbal character.
PALATE:  Full and complex with an elegant mix of ripe red fruit, primarily cherry with cassis and a little plum, and rich baking spice on the entry. A little dusty, savory cabernet franc charm emerges on the mid-palate along with subtle mint and eucalyptus notes leading to a long, clean finish.

While I normally love bold tangy spicy wines, I prefer it as a complementary tone, not as the main course. When combined with the brambly Paso Robles terroir character and the profile of an expressive vintage, this is almost a bit over the top for me, which I very rarely say.

Posted by UnwindWine at 6:57 AM No comments: