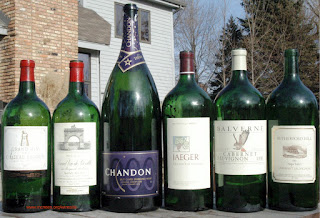 We served this special birth year Chateau Leoville Las Cases wine in a large format 5 liter Jeroboam (shown left) as part of a collection of large format bottles of birth year wines, at Erin and Johnny's wedding ten years ago this month. So it was fitting to open this label for her birthday dinner on their tenth anniversary. Cellar records show this is our second to last bottle, tempting us on how long we can hold the last one.

This was perhaps the second most exclusive wine served that momentous evening behind the first growth Grand Vin Latour, also served from an Imperial.

Las Cases is considered a 'super second', being the second level designation, second only to the ultra-premium first growths. The Las Cases Chateau, estate and vineyards actually are adjacent to the great Chateau Latour, even though it is in a dfferent appellation, St Julien vs Pauillac for Latour. 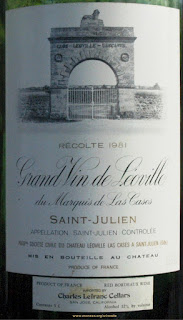 While St Julien, adjacent to Pauillac is the smallest of Bordeaux's most important appellations in terms of acreage, it accounted for a large number of the wines named in the Classification of 1855. Saint-Julien are among my favorite Bordeaux wines, with a profile being elegant, medium weight, with a cedary perfume, solid but rarely aggressive tannic structure, and with considerable aging ability.


Chateau Leoville Las Cases was originally part of a much larger estate that included Leoville-Barton and Leoville Poyferre. They were broken apart back in 1840. For the past five generations, the property has been owned and run by the Delon family. There are 97 hectare of vineyards planted in the classic Bordeaux varietals and proportions, 65% Cabernet Sauvignon, 19% Merlot, 13% Cabernet Franc and 3% Petit Verdot.

The legendary Grand Vin de Leoville is known for its power and richness, similar to its northerly neighbor, Grand Vin Château Latour. It is very much like its neighbors in the Pauillac appellation with its black fruit and mineral character and firm tannic backbone. In line with its 'super second' reputation, its almost expensive, but much more affordable that its First Growth neighbor (s).

The 1981 Leoville Las Case is/was affordable relative to it neighbor Chateau Latour. Also, the 1981 vintage was vastly overshadowed by the much heralded 1982, considered at the time to be the 'vintage of the century', or one of the top vintages of the century, hence rendering the 1981 a bargain relative to the budget busting 82's. The 1982 Leoville Las Cases received a perfect 100 point rating from Robert Parker, and thus was priced in the stratosphere. All the more that the 1981 was a bargain in comparison. This is much like my recent blogpost on the 1998 Napa Valley vintage, comparing it to its adjacent vintages.

I remember wondering if the somewhat maligned 1981 vintage wines held in our cellar as collectable birth-year wines for daughter Erin's wedding would hold up for the occasion back at the end of 2016. Alas, here we are enjoying this wine ten years later, in its 36th year. Such is the longevity of these classic Bordeaux.