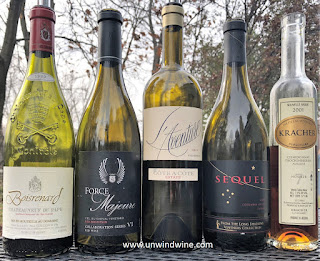 Twenty members of immediate family and dear friends gathered for our Thanksgiving feast. . For the occasion we selected a flight of Rhone varietal wines from our cellar and from son Ryan's.

We started with a aged vintage birth year selection celebrating son Alec and partner Viv joining us from NYC, a classic Chateauneuf-du-Pape.

Following the protocol of wine tasting, we moved from lighter wines to larger more complex wines. We progressed to more recent vintage Rhone Blend selections from our recent trip to Washington State Walla Walla and Red Mountain AVA, and then moved to a Rhone varietal Blend from Paso Robles.

We discovered and acquired this label during our trip to Châteauneuf-du-Pape back in 1998.

Nearing thirty years of age, this is nearing the end of its drinking window but still suitable for such an occasion. This is beginning to lose clarity and taking on an slight opaque tone and the garnet color taking on a sight brownish hue. We still hold three bottles from this case acquired decades ago representing son Alec's birth year, holding them for family occasions.

Consistent with earlier tasting notes, this was medium to full bodied with slight earthiness and leather fronting layers of herbs, black and green pepper that accompany the slightly subdued black cherry and black berry fruits with a hint of spice, moderate lingering tannins.

Progressing in weight and complexity, this GSM Blend (Grenache, Syrah and Mourvedre) in the Châteauneuf-du-Pape style is from Washington State Red Mountain AVA. We visited the producer Force Majeure during our recent Walla Walla Wine Experience 2018. 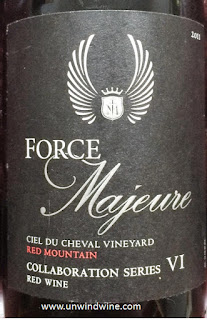 The Collaboration Series has ended as Todd has taken over general management and winemaking duties and his handiwork is now coming on line; this historic label was made by James Mantone of Syncline Winery. This is a blend 47% Mourvedre, 42% Syrah and 11% Grenache.

We just received our current release of Force Majeure 'GSM' blend, Parata, that we tasted and acquired during our recent Force Majeure Vineyards and new winery facility site visit and tasting, and were eager to open it and compare but didn't get that far in our consumption. We will look forward to a comparison tasting in the future as we hold several bottles of each.

We continued in our flight to a bigger, heavier, more concentrated Rhone varietal blend from Paso Robles L'Aventura that Ryan brought from his cellar. 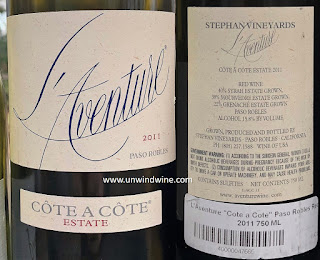 Another GSM blend, very similar in style and taste but bigger and more concentrated with a whopping 15.8% alcohol content. Amazingly approachable considering the high alcohol content.

This is the handiwork of legendary winemaker Stephan Asseo who has been making wine since 1982. After graduating from L'Ecole Oenologique de Macon, in Burgundy, France, he started his wine career when he established Domaine de Courteillac in Bordeaux, then later purchased Chateau Fleur Cardinal and Chateau Robin in the Cotes de Castillion, Bordeaux. Over the next 15 years he honed his winemaking skills there.

In 1996 he embarked on a year long global search of the world's great wine regions for a great terroir when he "fell in love" with the unique terroir of Paso Robles in Central California in the rolling hills  of the Santa Lucia Mountain Range. There, Stephan began his adventure, "L'Aventure".

This is a blend of 40% Syrah, 38% Mourvedre and 22% Grenache, similar to above but more Syrah and less Grenache.

Later after dinner, watching a movie, we opened this big Syrah Blend from Washington State that we discovered and acquired during our Seattle Culinary and Woodinville (Washington) Wine Tour 2018.


As chronicled in my recent blogpost on the Long Shadows Vintner's Collection, this is part of the portfolio of premium wines produced by legendary winemakers from around the world who are masters for their artwork with specific varietal wines. 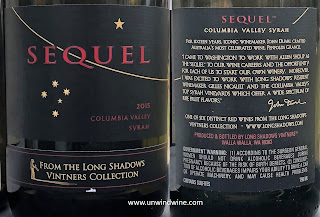 This Sequel Syrah is crafted by legendary Syrah winemaker John Duval, known for the leading Syrah label from Australia, Penfold's Grange. We hold a OWC (original wood case) of the 1990 Penfold's Grange, commemorating Alec's birth year. That label was Wine Spectator's Wine of the Year for the year 1993.

This could likely improve with some further aging as it could benefit from some time to settle and should improve with a couple more years to achieve more balance and harmony as it reaches the apex of its drinking window, which clearly will be another decade or more. With our deep cellar, we'd normally hold a bottle like this for a while before consuming but we tried it now since it is available still at Binny's, our local wine super store so we can go get some more to replace this bottle and stock up some more, (even though we're in the highest level of the Long Shadows wine club and will be receiving some in our shipment allocation; but that will be the next 2016 vintage and we'll want to hold the '15, as it is birthyear of two grandkids, Reid and Jessie.).

Finally, late in the evening we opened this TBA dessert wine. Viv just returned from an extended trip across Europe that include visits to Budapest and Prague in the Danube River Valley. There they visited several wineries. So, I pulled this Kracher dessert wine from the Burgenland wine region in Eastern Austria which I visited back in the early 2000's.

We hold more than a dozen labels of Kracher wines from this era. Its fun to watch quality dessert wines mature and change color over time, from straw color, to butter, then weak tea, and progressing darker and darker over time. Note this color of tea at seventeen years of age.

At their most desirable (to my taste preference) these wines are rich, thick, unctuous, and voluptuous with apricot marmalade, mango, toffee/brown sugar, and caramel notes. This may have been there at some point and perhaps passed that stage of its aging profile. If so, then it is time to drink although it will no doubt continue to age gracefully for several more years. But the rich, sweet apricot fruits nectar was gone and has turned more to a smokey charcoal layer over the fruits which were more subdued. Delightful never-the-less.