As the Coronavirus shut-in continues, we conducted another Coronavirus shut-in virtual family dinner and wine tasting like we did last week, sharing dinners and wine selections texts, photos and videos across the dispersed family, great-grandparents, us and our four kids and seven grandkids, shut-in in Conneticut and the western Chicago suburbs. It also provided the opportunity for us to support our local restaurants and order curbside carryout dinners. 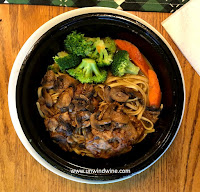 Linda and I ordered carry-out from Angeli's Italian, to support our neighborhood Italian trattoria, open only for curbside pickup. I ordered the Angelis Veal Special in a Marsala sauce with mushrooms (right) whilst Linda ordered Grilled Salmon salad special.

We also ordered a side order of Angeli's Italian Sausage and Peppers.

For our wine accompaniments, we finished what was left from the Keenan Spring Mountain Cabernet Franc from our dinner the night before.

Sean and Michelle came over and joined us for dinner and had the Angelis Italian Special Mussels entree. With their mussels and salad, we served the remains of Stonestreet Napa Valley Sauvignon Blanc, and Freemark Abbey Napa Valley Chardonnay that were left from earlier in the week. 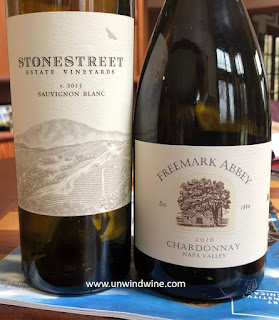 In honor of Sean and Michelle joining us, despite the extraordinary circumstances, and to celebrate Sean joining PureB2B team, we opened a birthyear bottle of Château Gruaud-Larose, 1985.

Our visit to Château Gruaud-Larose in St Julien Beychevelle was one of the highlights of our Bordeaux Wine Tour last summer.

We hold a dozen vintages of this producer dating back to the kids' birthyears in the eighties including Sean's 1985 vintage release.

We shared a virtual tour of our visit to Château Gruaud-Larose estate grounds, cellar, chai, library and hospitality center in St Julien from our unwindwine blogpost in these pages.

At Ryan's house not far away in Naperville (IL), he prepared for his family household dinner Carribean grilled ribs with baked beans and cilantro lime cole slaw. 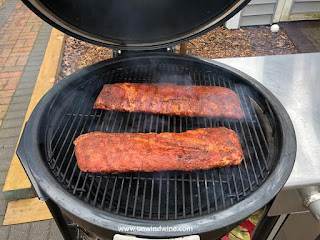 Ryan prepared BBQ ribs on his super smoker grill, hand rubbed with home made and Dave's preparation, grilled and smoked with dried apple wood and cherry wood chunks with mixed charcoal - on for three hours, then 2-3 hours wrapped in foil.

For his wine accompaniment with the ribs, Ryan and Michelle finished off the remains from the previous evening dinner, Maison L'Envoyé Two Messengers Willammette Valley Pinot Noir 2012. 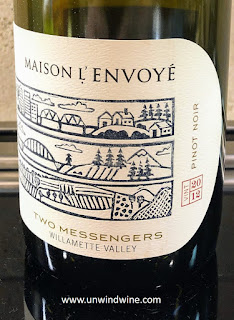 They then opened one of Ryan's favorites, L'Aventure Optimus Paso Robles Red Blend. 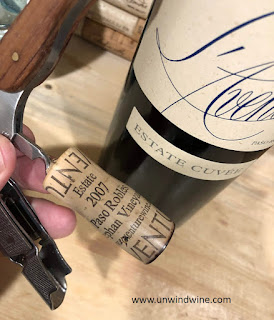 Ryan noted, "it was a serious fruit bomb, showing no age, with firm backbone and notes of charred wood that was perfect with the smoked grilled bbq".

He also prepared a carry out care package to take to great-grandparents Keith and Evelyn at the assisted living center. The best we can do is for them to wave to them at the window from the parking lot! Such are these surreal times and circumstances. 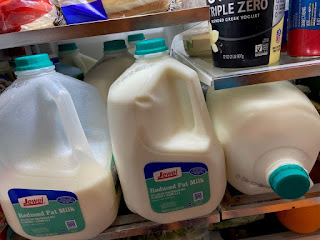 Erin and Johnny and their family of six were, of course, also shut-in at home in nearby western suburb Western Springs. They also in support of one of their favorite local eateries, had BBQ ribs carry-out from Q-BBQ in nearby LaGrange.

Not being oenephile wine geeks like Ryan and me, and Alec, as we were sharing our wine label selections across the group text, Erin showed their family beverage of choice for their dinner, milk. For their four small children, especially Richie who is a ravenous milk drinker, Erin shared a photo of their family refridgerator showing no less than six, or was it seven? gallons of milk, an astonishing normal week's supply.

From Conneticut, shut-in Alec and Vivianna checked in and shared they were preparing Asian chicken lettuce wraps.

Before dinner they had a local Conneticut craft brew, Beer'D Dogs and Boats Double India Pale Ale with Citra and Mosaic Hops (no vintage given ;>)), more appropriate than one might think as they sit on the shore overlooking the Long Island sound. 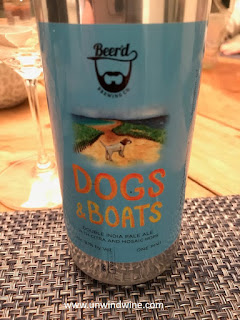 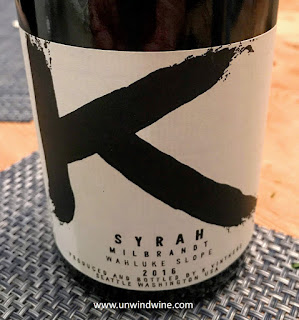 Later, Ryan and Michelle stopped by with the kids and brought us some pastries from DeEtta's Bakery in Naperville that they also took to the grand, great-grandparents. 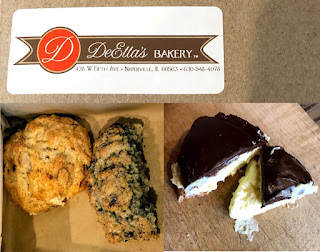 Posted by UnwindWine at 9:00 PM