A Visit to Château Gruaud-Larose

Another one of the key visits on our trip to the St Julien Appellation (AOC) in Bordeaux was Château Gruaud-Larose, a 2ème Cru Classé or 'second growth', one of fifteen Deuxièmes Crus (Second Growths) as classified in the original Bordeaux Wine Official Classification of 1855.

During our spectacular week in St Julien, we visited Léoville du Marquis de Las Cases, Chateau Ducru Beaucaillou, and Léoville-Poyferré, three other second growth St Julien producers, and Fourth Growth  producers Château Beychevelle and Château Branaire-Ducru. As with all the others, we hold or have consumed a selection of Gruaud Larose dating back several decades to the early eighties.

This label is one of the key holdings in our cellar collection consisting of more than a dozen vintages spanning three decades dating back to 1980 including the birth year vintages of each of our kids, 1981, 1982, 1985 and 1990. We hold many vintages in large format bottles including 3 liter double magnums which we served at daughter Erin's and son-in-law Johnny's wedding.

As I've written in these pages, Gruaud Larose was on our small select set of St Julien producers to visit during our trip to the region. As is our custom on wine region trips, learned from many trips over many years, its important to focus and not over schedule. Too many folks try to see areas that turn out to be far apart, and they spend much valuable time in transit, or worse, arrive late for cherished appointments. As such, we learned to focus on just one appellation per trip, set priorities ahead of time, and schedule only key activities based on objectives for the trip.

Château Gruaud Larose is one of the most historic estates in the Médoc dating back to 1725 when Abbot Gruaud bought just under 125 acres of land and planted vineyards. Since then, four families have succeeded one another at the head of Gruaud Larose: the Gruaud and Larose families, the Balguerie and Sarget families, the Cordier family and the Merlaut family. 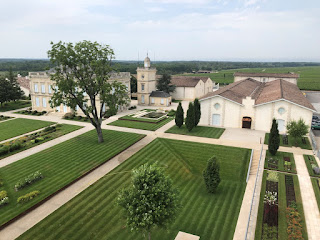 Abbot Gruaud passed the property to his nephew, Chevalier de Gruaud who passed the estate to his son-in-law, Joseph Sebastian de La Rose who renamed the property Gruaud La Rose or Gruaud Larose. He also gave his name to another massive Bordeaux estate, Chateau Larose Trintaudon.

In 1812, the family was forced to sell Gruaud Larose to retire their debts, the property was sold to Pierre Balguerie, Baron Jean Auguste Sarget and David Verdonnet.

Shortly after the official 1855 Classification of the Medoc, control of the property was split further among their descendants, but remained intact until 1867 when it was split into Château Gruaud-Larose-Sarget (after the Baron Sarget) and Château Gruaud-Larose-Faure (after Adrien Faure, who married one Sophie Bethmann, heiress to a portion of the estate). The wine they produced was bottled and sold as Chateau Gruaud Larose Sarget. 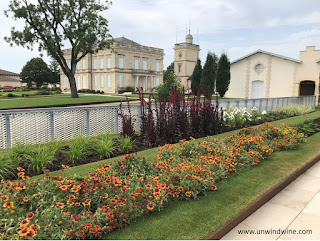 The two château were reunited by the Cordier family, who purchased the Sarget piece in 1917 and the Faure piece in 1935 and the château became a centerpiece of the Cordier properties along with Château Lafaurie-Peyraguey and Château Talbot.

The Cordier family had been negotiants since 1886. They acquired the Bethmann family holding in 1935. This allowed the Cordier family to recreate the original estate and the wine was renamed Chateau Gruaud Larose.

In 1983 it was purchased by the Compagnie de Suez, and in 1993 it was sold to the French conglomerate, Alcastel Alstom. In 1997 it was sold to Jacques Merlaut who also owns other Bordeaux properties under the name of the Taillan Group including Chateau La Gurgue, Chateau Haut Bages Liberal, Chateau Citran, Chateau Ferriere and Chateau Chasse Spleen. The Merlaut family introduced sustainable development and organic farming methods in the vineyards.

The notable Georges Pauli is régisseur and winemaker and has been on staff throughout all these changes. Eric Boissenot serves as consulting winemaker to the Chateau.

The Gruaud Larose Chateau and estate sits just outside the village of St Julien-Beychevelle at the southern end of the appellation located on the plateau to the west of Château Beychevelle. on the opposite side of the D2 Route from Ducru Beaucaillou and Leoville Barton.

The vineyards of Gruaud Larose have the highest point of elevation on the Saint Julien plateau and has a distinctive 'tower' which serves visitors a vantage point to view the entire estate. 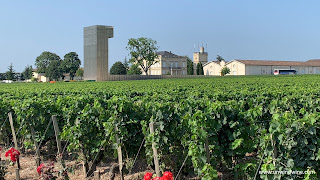 The tall tower stands out as a landmark and can be seen from across the region. Interestingly, while the toward provides a view of the entire estate, little can be seen of the village or beyond or of the neighboring Chateau due to the trees. 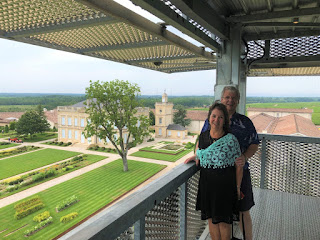 The tower sits atop a modern contemporary hospitality center that overlooks the property. It includes a welcome center, gift shop, wine bar and tasting center. 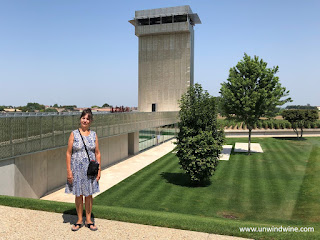 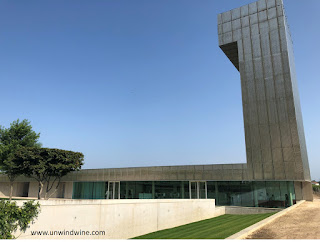 On display is a vertical collection of Gruaud Larose in magnums spanning thirty-three vintages.

The vineyard has not changed much since it was created in 1781 and is the same today as it was when it was classified as a Second Growth in the 1855 Classification of the Medoc. The Chateau has a culture as a family organization with employees working at the chateau from father to son and from mother to daughter.

The 200 acres of vineyards are planted in the Bordeaux sanctioned varietals of Cabernet Sauvignon (65%), Merlot (25%), Cabernet Franc (8%) and Petit Verdot (2%). The vineyards are adjacent to those of Chateau Talbot and Chateau Branaire Ducru which have smaller parcels. The property is divided into 110 parcels with the best terroir found in the 2 sections that surround the chateau and that adjacent to the park. 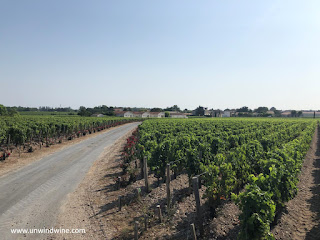 Chateau Gruaud Larose has a terroir of the St Julien legendary gravelly soil with quartz and a higher proportion of clay than that closer to the river, with more sand and limestone down deeper below.


The average age of the Gruaud Larose vines is 46 years with some of the Cabernet Sauvignon dating back more than 80 years.

Chateau Gruaud Larose is one of the few Bordeaux estates with a hail reduction canon, a high tech system system with radar that fires when hail is detected. The canon fired shock waves serve to break up the oncoming hail thereby protecting the delicate grape vines. We heard the canons firing in the the night  during a thunderstorm passed through the area.

Chateau Gruaud Larose vinifies the wine in a combination of 30 oak vats ranging in size from 55 to 115 hectoliters and 32 concrete vats that hold 50-100 hectoliters. The malolactic fermentation takes in place in cement vats and oak tanks. 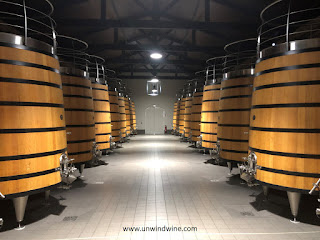 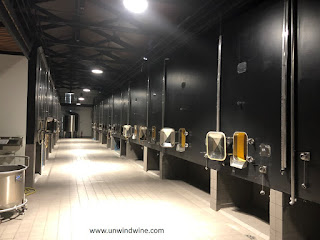 The wine is then aged in an average of 85% new, French oak barrels for about 18 months with the duration and percentage and treatment of new oak determined based on the characteristics of the specific vintage. 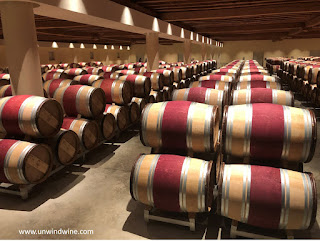 Gruaud Larose maintains a library in the cellars that contains the leading vintages as well as age-worthy vintages that date back as early as the middle of the 19th century. 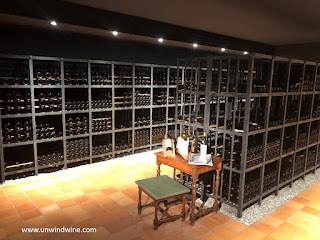 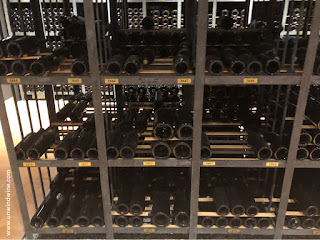 Chateau Gruaud Larose is known for wines that are concentrated, complex, full-bodied and long-lived, best consumed after several years of aging, typically at least 12 years or more, and often reach their peak maturity and optimal drinking window after 15 years and often last 35 years or more after the vintage release.

When young they tend to be tannic, tight and closed and should be decanted for 2 to 4 hours to soften and open. Older vintages might only need decanting so as to remove the sediment.

As part of our tasting and tour we were served a vintage 1999 release of Chateau Gruaud Larose, and a  Sarget de Gruaud Larose 2012. 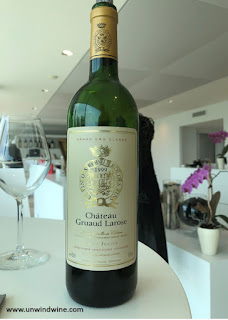 Chateau Gruaud Larose produces a second wine, Sarget de Gruaud Larose that was introduced starting with the 1981 vintage. The wine is named for the Sarget family, previous owners of the estate who sold their interests to the Cordier family in 1917. 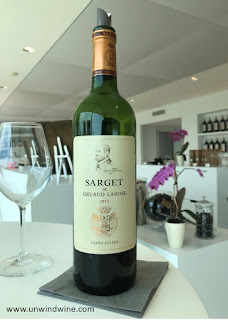 The second wine is comprised of grapes not deemed worthy of or suitable for the grand vin and is produced to be more approachable and at a more affordable price point. Reserving and dedicating the best prime grapes for the flagship label results in the highest possible quality achievable from the estate vintage release.