A Visit to Château Léoville Poyferré

Another one of the key visits on our trip to the St Julien Appellation (AOC) in Bordeaux was Château Léoville Poyferré, another second growth, one of fifteen Deuxièmes Crus (Second Growths) as classified in the original Bordeaux Wine Official Classification of 1855. 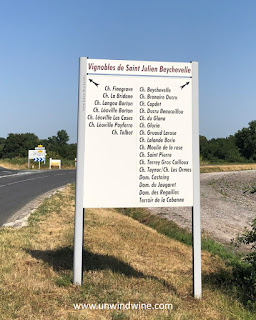 The Léoville-Poyferré Chateau and estate sits on the edge of the village of St Julien-Beychevelle as you exit north heading towards Pauillac, the next town and AOC adjacent to the north. The Chateau and facilities sit immediately across the D2 - Route du Medoc opposite the old church which sits adjacent to the Leoville Las Cases Chateau and gardens. 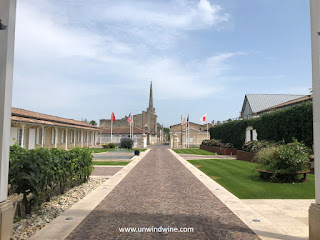 The historic Léoville estate dates back to 1638 when the greater property was the largest domain in the Médoc.

Back before the 19th century, Léoville-Poyferré was once part of the much larger Léoville estate that used to include Château Léoville-Las Cases and Château Léoville-Barton until the time of the French Revolution. Léoville was one of the biggest vineyards in Bordeaux at just under 500 acres.

In 1840, the St Julien Léoville estate was divided. Château Léoville-Las Cases was divided again forming Château Léoville-Poyferré which went to Baron de Poyferré when he married the daughter of Jean de Las-Cases. Pierre Jean de Las Cases, the oldest son received a share, which became Château Leoville Las Cases. His sister, Jeanne, passed on her share to her daughter, wife of Baron Jean-Marie Poyferre de Ceres. That was the genesis of what today is known as Léoville-Poyferré. In those early days, the Léoville-Poyferré wines were sold under the label and brand Baron de Poyferré.

Léoville Poyferré was purchased in 1920 by the Cuvelier family from the Lalande family. The Cuvelier family had been well establish in Bordeaux as negociants, or wine merchants, dating back over a hundred years to 1804.

The Cuveliers first purchased vineyards in the Medoc starting with Château Le Crock in St. Estephe, purchased in 1903, then Château Camensac in the Haut Medoc appellation. They then acquired Château Léoville Poyferré and Château Moulin Riche in the Saint Julien appellation.

Didier Cuvelier took over the château and surrounding vineyard properties in 1979 and set upon a program of improvement. Initially trained as an accountant, Didier Cuvelier also brought in Emile Peynaud as an advisor. They set upon modernization of the winemaking facilities. They also replanted 50 acres of vines. The vineyards were nearly doubled in size, from 120 to the current size of almost 200 acres.

In 1995, he enlisted the assistance of legendary Michel Rolland, noted winemaker as a technical advisor. Together, they have turned Léoville-Poyferré into one of St-Julien's finest estates.

Château Léoville Poyferré was long considered an innovator in the Médoc. They first introduced trellising the vines using pine stakes, which is now common practice. They were one of the first Bordeaux producers to rinse their barrels with sulfur to help protect their wines from spoiling during the shipping and aging process.

In 2014, the new Léoville Poyferré facility was constructed, the modernized building taking on the design of the historic estate with a long rectangle with a small tower at each end.

Didier Cuvelier retired after the 2017 vintage, turning over management of the estate to his niece, Sara Lecompte Cuvelier, the sister of Anne Cuvelier.

Didier Cuvelier, "Since 1979, our family has been dedicated to a vision that leaves no room for improvisation. Every decision, every investment, is a step towards ultimate quality, one that makes a simple wine an exceptional one, recognized as a Second Classified Growth in 1855."

The evening of our visit, we dined at Le Saint Julien restaurant, the fine dining establishment in the village, just across the street from the estate and the small village square.


With dinner we drank the Léoville-Poyferré 2008, a perfect complement to the daily special, cote de boeuf and pomme frites. 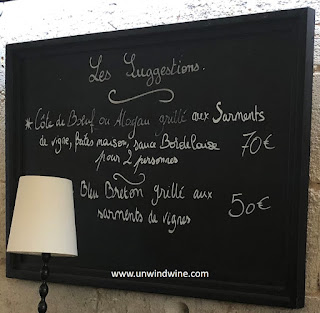 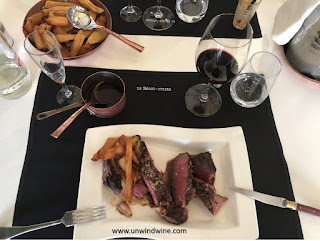 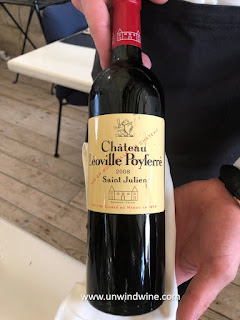 The staff talked with reverence about Didier Cuvelier, and he being there for lunch just the previous day, and how attentive and careful he was to the serving of the wine. This was in response to our mentioning our visit to the estate, and our acknowledgement of the wine service and the attention they gave to the proper serving temperature, chilling our bottle of red wine. We enjoy our red wines slightly chilled and keep our home cellar cooler than what might be normal. We're often frustrated by the service of our wines, even in the finest restaurants that supposedly are serious about their wine service. 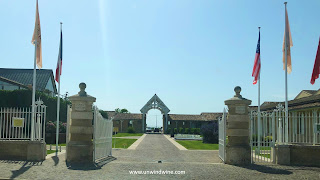 The Léoville-Poyferré estate and surrounding vineyards sit on the D2, the arterial route of the Médoc, across the road from former 'sibling' Léoville Las Cases. Adjacent to the property, across the appellation boundary in the Pauillac appellation is Château Pichon Baron, and across the road adjacent to Las Cases is the First Growth Château Latour, and Château Pichon Longueville Comtesse de Lalande. Nearby is the other former 'sibling' Château Leoville Barton.


The vineyards of Château Léoville Poyferré and its prestigious neighbors sit along the Gironde River estuary. The terroir of the area is famous for its gravelly, well drained soils, covered with pebbles that are the result of sedimentary deposits by the Garonne in the Quaternary period (about 700,000 years ago).

The rocky soil serves to naturally regulate soil temperature, holding the warmth of the sun into the night, and reflecting the sun upon the grapevines during the day. The terroir is enhanced by the moderating effect of the nearby river which tempers extreme weather and protects the riverside vineyards from frosts. 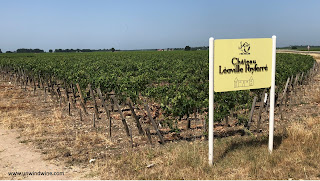 Léoville Poyferré is known to traditionally produce soft supple wines but in the recent years the wines have developed increased weight and body, largely due to the grapes being harvested riper and later, and because of increased exposure to new oak in the maturation process.

Léoville Poyferré often ranks with the best of the premier St-Julien producers, but often is priced at more modest approachable prices. The 2009 vintage Léoville Poyferré was awarded 100 points by legendary wine critic Robert Parker, one of five Bordeaux labels to earn the distinction in that vintage. 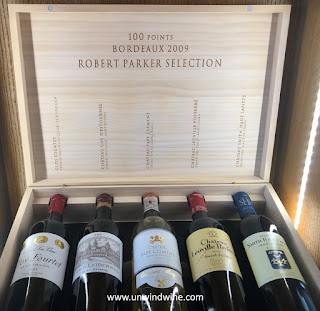 We were hosted on our tour by Claire of the hospitality team. We toured the vinification building which sits across the street adjacent to Léoville Las Cases, then the barrel storage building beneath the château, and finally the hospitality center and tasting room across the courtyard. 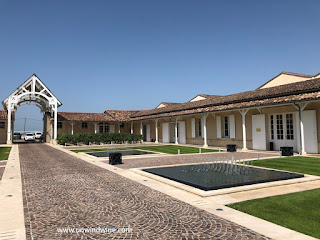 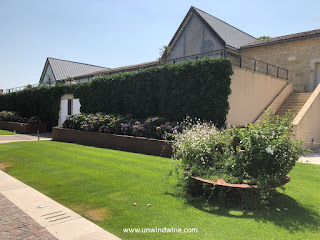 The grape bunches when harvested are brought in in small crates and first sorted by hand on tables before destemming, then a second time by new high tech optical sorting machines before crushing.

Here is the vinification room where each vineyard plot is vinified individually in one of the fifty-six stainless steel vats. 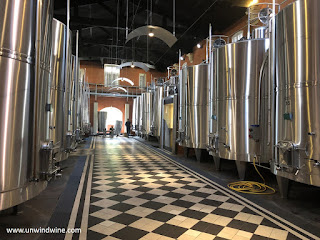 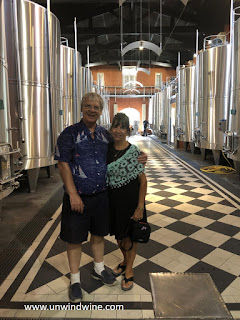 The vinification process creates the wine from the grapes and is where the character and profile is developed with the accent and extent to which the tannins will be revealed. Care is taken to maintain the consistency of the process established over decades of practice and research, and applying the technical innovation to maintain the qualitative tradition and lineage of the style of Léoville Poyferré.

In 2010, the vat rooms were completely renovated, replacing 10 large vats with 20 new stainless steel, double skinned vats with a capacity increased from 60 hectoliters to 165 hectoliters, for a total of 56 vats in all. This provided for very precise vinification of the batch on a parcel by parcel basis. Malolactic fermentation takes place in barrel. 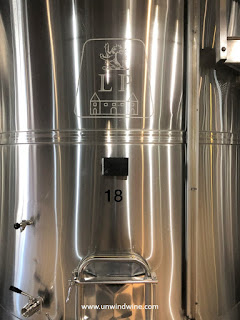 There are 27 double-walled tanks that are used for cold pre-fermentation macerations for 6 days. The extraction of color occurs gradually and pure fruit aromas are revealed. 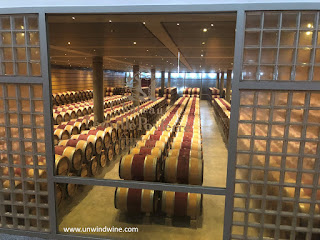 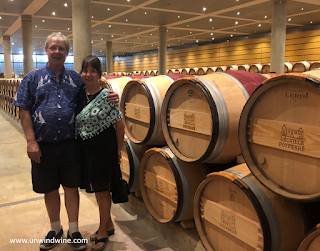 The batch is transferred to the barrel aging facility where the wine is aged in 75% new oak barrels for 18-20 months. Particular care is taken in the selection of barrels, the type of oak, and the preparation of the oak, in order to complement and harmonize with the character of the vintage, and the signature style that is Léoville Poyferré. The notable Michel Rolland serves as advisor to provide guidance in the vinification and the blending.

The hospitality tasting room sits across from the barrel building overlooking the courtyard, opposite the Château. 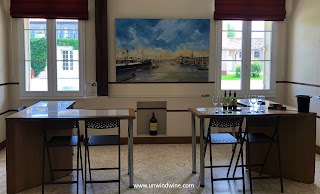 Château Léoville Poyferré wines are known for their character and style of ripe concentrated fruit with a powerful but pure plush style of supple, silky textures. Flavors of black fruits are accented by tones of cassis and spice with truffle and tobacco aromatics. 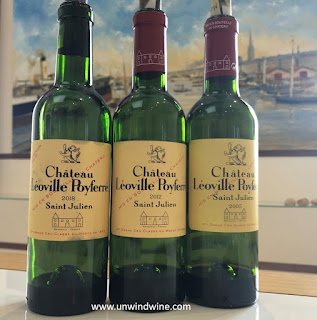 We were served for our tasting Léoville Poyferré from the 2005 and 2012 vintage releases, and the barrel sample of the upcoming 2018 release. The wine flight is carefully selected and paired with artisan chocolates to complement the vintage. A chocolatier advises the blend and source of each chocolate to be paired with each wine. 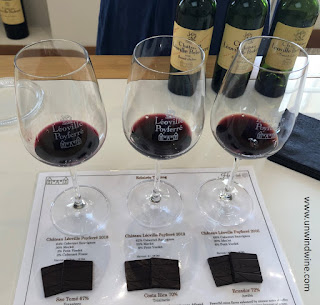 Starting with the legendary 2009 vintage, when the flagship Léoville Poyferré received 100 points, Moulin Riche started being produced from its own specific vineyard parcels as its own label and brand. It is produced by the same technical team that produces Léoville Poyferré. On average, close to 10,000 cases of Moulin Riche are produced each vintage.

The Moulin Riche logo is designed as part of the branding of the flagship signature label Léoville Poyferré with the Château and its two towers, and colours. This is done by design to identify with the Cuvelier family wines, but to differentiate from the first label. Since the 2009 vintage, Château Moulin Riche has also gained notoriety as its own brand and distinctive wine.Château Moulin Riche is sourced from its own 50 acre Left Bank vineyard of Château Moulin Riche. It is planted in traditional, sanctioned Bordeaux varietals, Cabernet Sauvignon (60%), Merlot (32%), and Petit Verdot (30%). They also represent the same St Julien terroir with gravel and limestone soils.

In vintages when the Petit Verdot is very ripe, it is also included in the grand vin, Léoville Poyferré.

The Moulin Riche wine is aged in a combination of new and used, French oak barrels for between 18 to 20 months before bottling. 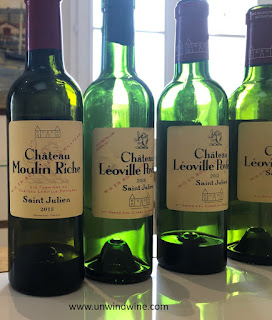 Pavillon De Léoville Poyferré is the second wine of both Châteaux Léoville Poyferré and Moulin Riche. Made from younger vines, it is produced to be more more affordable and to be balanced, fruity and easy to drink, approachable at an earlier age.