We hosted a family dinner for son Sean and daughter-in-law Michelle for a momentous family gathering for them to announce/reveal the gender of their expected baby. In recognition of the special event I opened a couple of special bottling labels and birth-year vintage wines for the occasion, in addition to a medley of other wines. 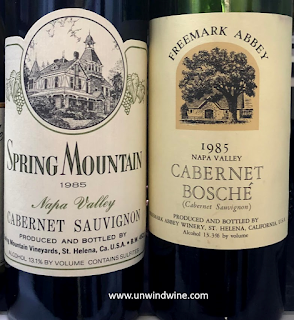 In tribute to Michelle, we opened a magnum of Chateau St Michelle 50th Anniversary Cabernet Sauvignon. And, in tribute to son Sean, I opened two vintage birthyear bottles from our cellar collection.

Son Ryan brought two wines he had open from earlier, a Cakebread Pinot Noir and a Cliff Lede Napa Claret.

We also opened some chilled white wines and a broad selection of craft beers.

The highlight of the evening, of course, came at dusk when Sean conducted a fireworks display culminating in a rocket launched starburst of pink and whites and reds signaling/revealing the gender of their expected baby daughter!

We picked up all the available large format magnum bottles of this special tribute bottling upon release as we knew we would serve them on special occasions such as this. We also served this as part of our big bottle selections at their wedding rehearsal dinner.

This was the 50th Anniversary Special commemorative bottling of this wine.

Winemaker Notes: "We craft our Columbia Valley Cabernet to highlight concentrated Washington red fruit in an accessible style. This is an inviting Cab with plenty of complexity and structure with silky tannins. It’s also very versatile with food."
Decanter gave this release a 93 rating. The Tasting Panel gave it 90 points.
Decanter - "A 50th anniversary special bottling, this has a touch of Napa Valley about it in the rich palate, balanced with Left Bank structure, tannins and restrained oak influence."
Tasting Panel - "Creamy and plummy with generous, tangy style; an exceptional bargain packaged with a retro label."
RM 90 points.
https://www.cellartracker.com/wine.asp?iWine=3316743
I opened two vintage release labels from Sean's birthyear.
Freemark Abbey Napa Valley Bosche Vineyard Cabernet Sauvignon 1985

At 36 years, this was holding up well, still within its drinking window, a testament to the ageworthiness of this single vineyard designated label. As shown in the photo (right), the fill level was as to be expected, an acceptable bottom of the neck, the label and foil were perfect, and the cork, while starting to dry at the top half, was moist and starting to become a bit soft on the bottom half. The cork extracted okay using a regular corkscrew although I was prepared to use the Ahso two pronged cork puller.
We've been collecting this single vineyard designated label going back three decades and this 1985 release was the oldest in our collection. I first discovered this wine when I met producer Jeff Jaeger, one of the Freemark Abbey partners at a producer wine tasting at the predecessor to Binny's in Naperville in the mid-nineties. At that tasting I was introduced to, tasted and subsequently acquired a case of Freemark Abbey Bosché Vineyard Napa Cabernet 1992.
Wine buddy, Bill and Beth, and Linda and I have visited the Freemark Abbey Napa Valley winery together on numerous visits, and acquired bottles from the library collection there for special occasions. In 2009 we toured the library and acquired 1974 and 1978 vintage labels for a special anniversary celebration dinner that night across the road at the CIA (Culinary Institute of America), Greystoke Mansion.
We opened a bottle of this vintage label together two years ago as part of our wedding celebration festivities.
This legendary label is named for its source, the Bosché Vineyard, a small 22-acre vineyard located west of Hwy. 29, on the famed Rutherford Bench. Freemark Abbey has been sourcing fruit from this property for this label since 1970 based on a handshake deal with vineyard owner John Bosché, a San Francisco attorney.
The Freemark Abbey Bosché Cabernet is 100% from the vineyard and was one of Napa's first vineyard-designated wines. Located in the heart of the Rutherford Bench, it continues year after year to produce one of the most distinctive wines in Rutherford, and remains one of Freemark's most sought-after releases.
The Bosché Vineyard has very deep gravelly soils. A seasonal creek crosses the vineyard which indicates the water table to be high in the spring, providing water and nutrients for new shoot growth. As veraison approaches the water table drops, stressing the wines and intensifying the dark velvety fruit flavors. This is a natural area to grow Bordeaux varietals with dry farming or minimal drip irrigation.
Freemark cites this wine to have a life span in a proper cellar of 20-30 years and tonight's experience was certainly a testament to that. 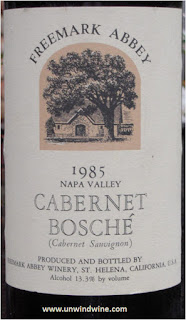 This vintage release was awarded 90 points by Wine Spectator.
The recent remarkable 2015 vintage of this label was awarded 97 points by Robert Parker's Wine Advocate.

This is typically a blend of 92% Cabernet Sauvignon and 8% Merlot.

Reviewed recently in 2018, Robert Parker's Wine Advocate wrote of the 2015, "the 2015 Cabernet Sauvignon Bosche Vineyard has a deep garnet-purple color and is scented of earthy nuances of truffles, dusty soil and underbrush with a core of crème de cassis, black cherry compote and blueberry pie plus hints of camphor and scorched earth. Full, concentrated, rich and densely packed with loads of earth and black fruit layers, it has a firm, ripe, grainy frame and oodles of freshness, finishing long."

Winemaker Notes for the 2105 release: "Dark ruby in color, the 2015 Cabernet Bosché has aromas of dark cherry, brambly blackberry, and cassis, with immense depth and complexity. The sweet oak spice is prominent with spice nuances of cinnamon, clove, aromatic cedar, cigar box, and dark cocoa powder. The flavor is big, voluptuous, and elegant, with rich great depth of dark cherry and Santa Rosa plum. With balanced acidity, good body and texture, the tannins are substantial but integrated, providing a very long, fruitful finish."
WS on the 1985 - Lean, tight and concentrated with firm black cherry, plum, currant, earth and cedar flavors that are intense and lively with a narrow, focused finish. Plenty of flavor on the aftertaste.
While initially musty and funky, this quickly opened to reveal its true native character and tasting profile. Dark garnet colored, medium full bodied, complex but nicely integrated black berry and black cherry fruits were highlighted with notes of spicy cinnamon and clove with tones of cedar, cigar box, and dark mocha turning to long supple tannin laced tongue coating finish.
RM 90
Two years ago when I last opened this label, I wrote, "Incredible, amazing life left in this 33 year old, showing little sign of diminution, even at this age! Dark purplish garnet colored, medium full bodied, rich concentrated complex black berry and black cherry fruits with a subdued layer of soft cedar/camphor with cigar box and moderate acidity on the moderate tannin lingering finish."

Cakebread Cellars Sonoma County Annahala Ranch Pinot Noir 2017
Ryan brought the remains of this bottle from the previous evening dinner to share. We visited Cakebread Cellars Napa estate and winery during our Napa Valley Wine Experience in 2018.
While known for Napa wines, this Cakebread Pinot is from their Annahala Ranch in coastal Mendocino County, a 60 acre site near the small town of Boonville in southern Anderson Valley. Annahala is the sister ranch to their nearby Apple Barn Vineyard — both are former apple orchards along the banks of Anderson Creek. The Annahala site, with its closer proximity to the Pacific Ocean, spends more time in fog. The coastal climate and loamy soils are suited and recognized for producing world-class pinot noir wines with bright aromatics, vivid varietal flavors, and silky tannins. 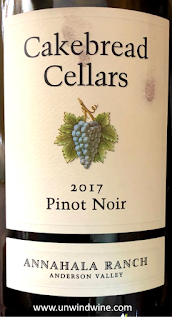 Dijon clone vines are selected to impart perfume and intense black cherry characters, while another clone contributes elegant texture and a hint of dried rose petals.

This is from the historic estate that gained fame for being the location where the TV series Falcon Crest was filmed, high up Spring Mountain above the Napa town of St Helena.
While typically known for long-lived wines with its mountain fruit and low yields, this particular bottle and vintage release of this label had not faired as well as the Bosché, above. The fill level was normal, at lower neck, and the label, foil and cork were in good condition. After extracting the Bosché cork with a traditional normal corkscrew puller, Ryan tempted fate with the bottle and it's stiff and drying cork, which ultimately separated in half.
The color was starting to take on a slight brownish hue, the concentrated forward black berry and currant fruits were hanging on but starting to give way to a musty funkiness, which did burn off after an hour, but starting to take over were non-fruit flavors of tea, smoke, wood, wet earth and leather with a tart tangy acidic finish. This bottle was past its prime drinking window and was succumbing to diminution from aging, still drinkable never-the-less, but for those with an affinity or a taste or tolerance for aged Cabernet.
RM 87
https://www.cellartracker.com/wine.asp?iWine=26125
Cliff Lede Napa Valley Claret 2018
Ryan had opened this for dinner the night before and held back a partial serving to share and compare this evening. While we are big fans of Cliff Lede cabernets, and have visited the estate in Napa Valley Stag's Leap District several times, this more modest entry level release is uninteresting and uninspiring, certainly when compared to the rest of the higher end portfolio. Of course its also priced at the low end as an entry point to the portfolio at a price point of around $50. Ryan acquired this as part of his Lede wine club allocation and hence obtains the lesser wine as part of his getting access to and obtaining some of the highly allocated much sought after premium labels.

As the name Claret indicates, this is a blend of the Bordeaux varietals - 55% Cabernet Sauvignon, 29% Cabernet Franc, 9% Merlot, 5% Petit Verdot, 2% Malbec.
Producer's notes on the sourcing for this wine: "The Bordeaux varietal grapes in our Claret blend are sourced from our estate Twin Peaks Vineyard in the Stags Leap District and a few of our valued grower partners within Napa Valley. The wine is composed of small batches from a variety of blocks, representing a diverse range of carefully selected rootstocks and clones. Yields are maintained at sparse levels, with a focus on canopy management and vine balance. The resulting blend boasts remarkable depth and complexity."
Winemaker's notes: "The 2018 Claret showcases all the deep, lush accessibility of the vintage. Its attractive perfume scents the glass with violets, blueberries and warm marionberries. The entry is full of appetizing and concentrated black cherries, warm red licorice, and wild raspberries. The lovely balance inherent in this claret is framed by lavender, cinnamon, cumin, and talc notes. Coating and long, this beauty of a wine finishes with a succulent display of red apple tart, puff pastry, and lingonberry jam". – Christopher Tynan, Winemaker. "This dark ruby colored wine is laden with chocolate covered cherries, powered cocoa, and cassis aromas. Summer raspberry and blackberry flavors coat the palate and luxurious blueberry jam flesh out on the long, expansive finish. This lovely Claret is lithe and playful, but manages to maintain a weighty seriousness. The black licorice, allspice, and plum notes persist on the finish tempting the taster for another glass."
Garnet colored, this was a bit closed and tight and was probably consumed too early at too young an age and hopefully will benefit from three to five years or more of bottle aging before revealing its true character profile and potential.
RM 89 points.
https://www.cellartracker.com/wine.asp?iWine=3821645
https://www.ledefamilywines.com/product/2018-Cliff-Lede-Claret--Napa-Valley

Posted by UnwindWine at 9:30 PM