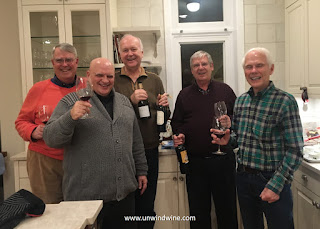 Readers of these pages know that OTBN stands for Open That Bottle Night, the annual wine event for collectors and oenophile wine enthusiasts, the night set aside to pull that special bottle being held in the cellar for an occasion whose time has not yet come. So once a year, what the heck, OTBN - open that bottle (to)night. 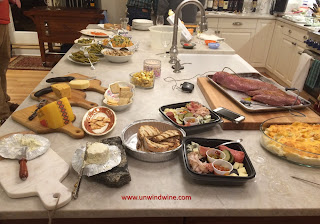 As always, the event provided a wonderful gathering, great food, fellowship, and of course, some extraordinary wines. 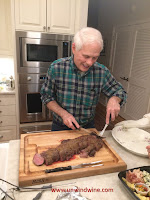 With the initial courses there was a wine flight of two champagnes and a Gratis Sea Smoke Chardonnay from Santa Barbara Santa Rita Hills, 2008. 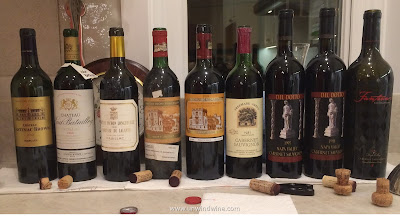 The wine flight featured a broad selection of Bordeaux from Pauillac, St Julien and Margaux and a flight of Napa Cabernets.

Like the Ducru Beaucaillou, Pichon Lalande is often noted as one of the 'super seconds' - or second growths that often rival the premiere 'First Growths', as they are specified according to the great 1855 Bordeaux Classification.

This is typically one of my favorite Bordeaux labels.  Typically I am drinking this wine after a decade or more of aging such that this 2009 at this stage seems young to me even at nine years.

Not nearly as big, dense and structured as the Ducru from the same vintage, this is more polished and almost elegant in comparison.

I called Dan in preparation for this evening's festivities to compare and coordinate wine selections. When he told me he was bringing a Ducru 2009, I went down in the cellar and pulled this 1989 to share and compare. 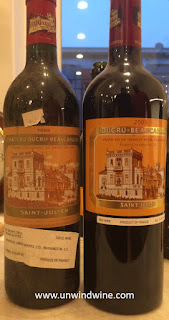 This highly acclaimed release of this top ranked Chateau, the 2009 Ducru was definitely one of the highlights of the evening with its opulent full bodied, rich concentrated complex fruit. Like the Pichon Lalande, this was one of the 'signature' wines I served from large format bottles at my kid's wedding (s).

We no doubt drank this too early as it will most assuredly age well for decades to come. Never-the-less, this was approachable and delivering early gratification with its full throttle intense, layered fruit. Robert Parker gave this wine 100 points and projects it will last 40-50 years.

This is a massive wine that could likely benefit from several years of aging to round out and smooth off the edges. Dark garnet colored, full bodied, concentrated complex firm backbone of black berry and black raspberry fruits accented by layers of graphite, creme de cassis, dark mocha chocolate, expresso and smokey tannins on a lingering firm finish.

This is a blend of 90% Cabernet Sauvignon and 10% Merlot. 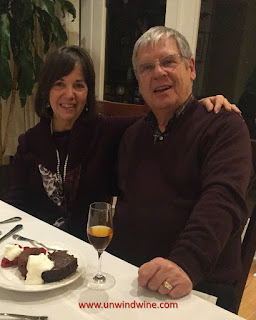 I acquired a case (OWC - original wood case) of this wine upon release years ago and still hold several remaining bottles. This showed very well tonight standing up better to its age than in some previous tastings. Amazingly resilient and presentable at nearly thirty years.

Tonight was consistent with my notes from a decade ago. Garnet color - medium-light delicate body; floral perfume, black cherry and berry fruits with layers of anise, tobacco and black tea and a hint of leather, with floral continuing on a modest tannin finish. An interesting comparison to the 2009, very different profile between the two vintages, but showing some signs of similarity in the terroir character of the label. Based on tonights experience, I pushed the drinking window out from 2017 to 2019.

The 2000 vintage Bordeaux was highly acclaimed. As often stated in top vintages, 'all boats rise with the tide', so that, less heralded labels often produce extraordinary wines in such years. The 2000 Haut Batailley was noted by Wine Spectator to be "the best wine from this estate in decades" (92 points). Robert Parker said it was "one of the finest Haut-Batailleys ever made (it certainly rivals the 1996)".

This was dark garnet colored, medium to full bodied, with dark berry and currant flavors accented by mocha chocolate, hints of cassis, classic Pauillac graphite and tobacco notes, and toasty oak with smooth soft tannins on a pleasant lingering finish.


The flight of Napa Valley Cabernets: 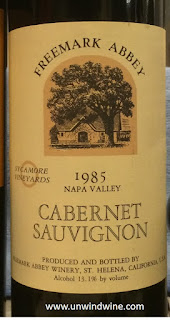 Bill brought this from his cellar back in South Carolina. He has been collecting this wine for several decades and this is remarkable testimony to this wines ageability.

We visited the winery and explored the library and acquired some aged vintages for special commemorative anniversary dinners during our Napa Valley Wine Experience back in 2009.

Fantesca is one of our favorite Napa Cabs. We tasted as pre-release and Bill acquired this during one of our visits to the estate on lower Spring Mountain overlooking St Helena on the valley floor below.

This was the youngest Napa Cab tasted yet was a dozen years of age. As such, it was the most vibrant, forward, and concentrated of those featured, yet it was very approachable, nicely integrated, balanced, smooth and polished, clearly the favorite of some of the ladies.

WCC and I both give this 92 points.

Our Del Dotto Cave Tour and tasting at the Rutherford Estate was one of the highlights of our Napa Valley Wine Experience this summer. Several of us purchased Del Dotto wines for our cellars, so it was fitting I bring a couple of vintage Del Dotto to OTBN. Bill expressed interest in such to see how they are aging, and it was an interesting comparison to the aged Freemark that he brought for the event.

I've written several times in these pages about the Napa Valley 1998 vintage, how it was panned and overshadowed by the much heralded 1997 and 1999 vintages. So it was an interesting and fun comparison to taste this duo.

These are 100% Estate grown from the Rutherford Estate there at Hwy 29 and Zinfandel Lane, the 1997 and '98 Del Dotto Cabernet Sauvignon were blended with some estate grown Cabernet Franc and Merlot.

Del Dotto Napa Cab 1997 - An interesting comparison to the '97, also showing well, as written and consistent with earlier tasting notes:

"My previous tasting notes over the last five years showed this selection coming of age and opening up with more fruit as it matured. This presented big pronounced and lively fruits of currant and berry flavors accented by nicely integrated oak before giving way to hints of cedar, leather and tobacco. Dark garnet colored, moderately firm with refined lingering tannins, this '97 still is vibrant and has several years of pleasurable easy drinking left." 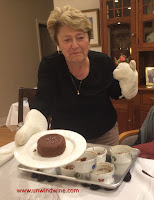 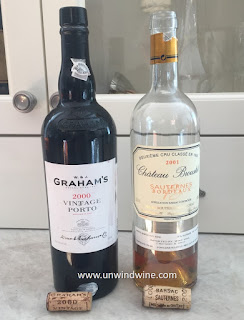 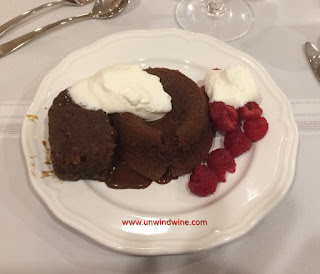 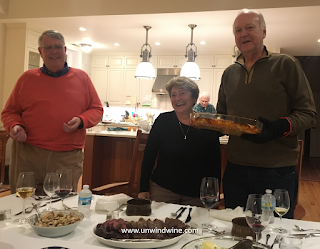 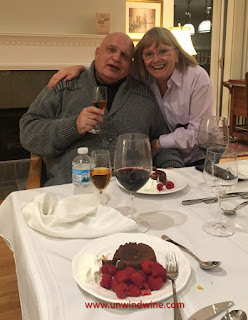 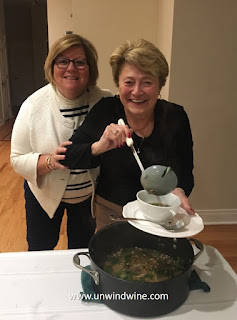 Posted by UnwindWine at 4:05 PM