With Son Alec visiting from NYC for Christmas, we had Linda's homemade lasagna for late dinner after late arrival from the airport. To accompany dinner, I opened this vintage Del Dotto Giovanni's Tuscan Reserve 1997 from the cellar. We hold a decade of vintages of this wine and opted to open the oldest as its no doubt time to drink as its late in its drinking window life. 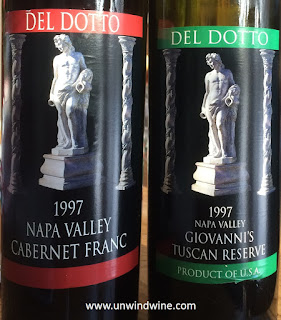 Clearly showing its age at 20 years, the black cherry and berry fruits are giving way to leather, earth, smoke and a bit of funkiness starting to set in. The garnet color is starting to show some bricking and brownish rust hue on the edges.

The next evening we opened another 1997 vintage Del Dotto, this time the Napa Valley Cabernet Franc, which I suspected would be the next oldest drinking, ready to drink varietal from our vintage collection from this producer.

Holding its age better than the Tuscan from the evening before, this too was ready to drink, nearing the last chapter of its drinking window.

My last published tasting notes of this wine were last year when I wrote: "Tonight's tasting was more consistent with notes from a few years ago, dark ruby color, medium to full body, spicy black berry and black currant fruits are still vibrant in this nineteen year old, accented by tones of earthy leather, cedar and tobacco with hints of anise on the smooth tannin finish."

Posted by UnwindWine at 2:12 PM