By far the standard bearer for fine dining in Bloomington, local natives and namesakes, David and Kristen Tallent take exquisite cuisine to a level one expects to find in finer restaurant mecca's New York or Chicago. Not surprising, since they studied at the C.I.A. - Culinary Institute of America in New York, then learned and refined their craft at fine restaurants there. At the C.I.A., David became learned in the Slow Food Movement using local, seasonal and organic ingredients.

David and Kristen initially opened Restaurant Tallent in 2003, then moved to the current location in 2007. David oversees the kitchen operations and develops the menu creations, while Kristen overseas the wine list, dessert menu and serves as pastry chef as well as General Manager.

The menu creations are Indiana Hoosier cuisine with a sophisticated cosmopolitan flair. I tried the Indiana Strip Steak with Hash Brown Casserole, Asparagus, served in a Wild Mushroom Bordelaise. We also tried the seafood entree - the Alaskan Halibut with Creamed Cabbage & Ramps, Sunchokes, Corned Beef, and Maple Mustard Gastrique, and the Herbed Gnocchi with Spring Vegetables, Preserved Lemon & Pistachio Pesto. All the entrees were creative and superb. For starter we tried the Rye Whiskey Foie Gras Torchon with Rhubarb Jam, Bourbon Sherry Caviar and Cornmeal Waffle. The Foie Gras was exquisite, undone slightly by the overtly tangy sour Caviar and the bland underwhelming cornmeal waffle. Toast points would have better suited the elegance of the Foie Gras.

I called ahead early in the week after making dining reservations, to arrange corkage arrangements for a special vintage bottle selection from our cellar befitting a very special dining occasion. We were advised this is not allowed and then directed to the wine list selections. Alas, in choosing our entree and wine pairing, our wine selection had been removed from the wine list. Ironically, as is my custom before ordering, and then again when I discovered our wine choice was no longer offered, I had inquired whether there were any wine selections not shown on the winelist. I was admonished that the wine list was complete, and representative of all available selections. Only on insisting to investigate the availability of the particular wine we had chosen from the published on-line winelist were we presented with our original selection choice - albeit a different vintage, which had been removed from the published list, and which remains still on the on-line feature. Moreover, while having been advised ahead of time in our phone inquiry to refer to the winelist, and then advised that the winelist was indeed up-to-date and correct, our second selection from the published list presented at the table, supposedly updated just the day before, was not available. Clearly, their care and attention to detail in the precision and accuracy and presentation of both the on-line list and the published list provided at the table is lacking, overshadowed only by their disregard and lack of respect for the value a client may place on the import of selecting a favored and appropriate matching wine to accompany their dinner selection. Some diners, certainly wine geeks or aficionados, consider the wine experience an integral and important part of the dining experience. Expecting relative accuracy is not a long call considering the number of red wines offered numbers about thirty.

This unsettling discourse only set to magnify other service shortcomings of the evening - an entree served less than hot, empty water glasses, and in-attentive servers failing to check on progress or satisfaction of the meal. Never-the-less, the quality and imagination of the food selections and preparations were wonderful and warrant a visit, or a return trip. 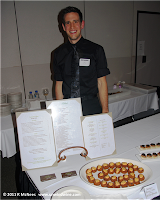 Restaurant Tallent were supporters of the Big Red Wine Fest a charity wine tasting to support Boys and Girls Clubs of Bloomington.