We've been wanting to dine in this location for many years in light of its unique setting in a historic building originally built as a chapel complete with stained glass windows and cathedral ceiling. Several different restaurants have come and gone at this site despite its prime location in the center of trendy downtown Wheaton, Illinois. 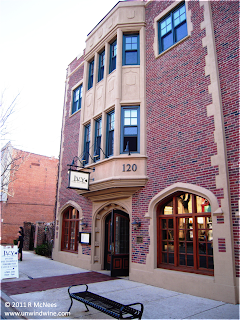 There is some irony that the Ivy Restaurant website homepage prominently features Martini Night given that Wheaton was a 'dry' town for so many years. They also offer a half-price wine night on Tuesday's which is always a worthwhile endeavor and practice worth supporting.


While they feature their dinner and dessert menus, I could not find a wine list on their website so I called to inquire about their corkage policy which is $20 per bottle. Alas, having selected a favorite entree, Gorgonzola encrusted New York strip steak, I set upon the wine cellar for a fitting pairing. We also invited friends Mark & Shirley to join us and knowing Shirley loves Cabernet Franc the stage was set for a cab franc stand-off showcasing a vintage favorite aside a premier new discovery offering from our recent Napa Valley wine experience.

I advised the server we were doing a wine tasting pairing and inquired further about the featured selections. Per the menu, the steak was accompanied by Ivy House Potatoes. Advised that they were roasted in garlic I opted for the Ivy Whipped Potatoes. Mark ordered a Special du jour Braised Veal Shank served with roasted potatoes, fresh seasonal vegetables. Both ladies ordered the special feature du jour Sea Bass with cous cous.

Since I was focused on the wine tasting/pairing, I avoided the mussels sauteed in garlic. The brie cheese on the toast points was a nice but uninspiring accompaniment. The others cited the mussels as being less than stellar appearing to be not as fresh as they might be.

The anticipation of the wine/entree pairings was heightened. The New York strip arrived smothered with a crusted Gorgonzola which normally I love. Unfortunately, it was so laced with Thyme, there was no sense of the Gorgonzola whatsoever, let alone the beef. I am not a fan of Thyme, which normally I would associate with poultry and Thanksgiving turkey dressing. The affect on the beef was very unappealing. Worse, the whipped potatoes were laced with garlic. By this point any hope of a comparison tasting of the Cabernet Francs was lost.

The Sea Bass was also a bit disappointing, being less than stellar fresh, and the cous cous appeared to look more like risotto. Unfortunately, the dinners were also loaded with salt so as to take away from the tasting experience. We couldn't get enough water.

The saving grace of the evening, beside the stuffed dates, was Mark's entree the braised veal shank which he enjoyed very much.

We finished with the creme brulee which was very good.

The restaurant wine-list was basically American, appeared to predominate with California complete with a range of offerings up to Silver Oak Alexander Valley at $128 and Robert Mondavi Reserve Cabernet at $150 - no vintages listed.  Had it been listed on-line, I would have planned accordingly as there appeared to be one or two selections I would have explored. I appreciate and was grateful for their fair and appropriate corkage policy - indeed, it provided the basis for our visit.

We visited Constant Vineyard and Winery just last month during our Diamond Mountain Wine Experience as featured on this blog. Del Dotto are long favorites as were featured during our Napa Valley Wine Experiences several times in 1998, 1999, and 2003 as showcased on our featured producers on www.unwindwine.com.

The restaurant is very picturesque with a very nice setting including an outdoor seating area adjoining the ivy colored building - hence the restaurant name. The ambiance upon entry is a bit confusing as the elegance is a bit undermined by the sports-bar feel with the big screens featuring sports in the bar adjacent to the entry. 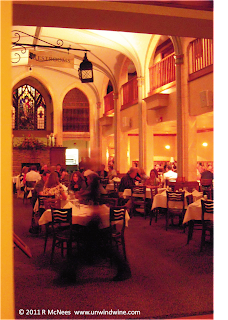 We were seated promptly, reasonable to expect for a 6:30 seating with reservations. There is a stylish side dining room surrounded by windows and accessed  through french doors off the main dining room. The main dining room has the high cathedral ceilings with a surrounding second floor balcony overlooking the main floor. At the head of the room is a large massive stone fireplace. Seating is tight with three columns of tables down the center and sides of the 'sanctuary', one sidewall having window views to an adjoining courtyard, the opposite side against a bench seat under an alcove looking out into the main hall.

The service was attentive and friendly albeit lacking in detail to properly describe the nature of the food preparations given our stated sensitivity to wine suitable. Moreover, the menu descriptions failed to mention the spices and garlic which might have been acceptable had they not been so predominate (overwhelming). Upon our frank expression of dissatisfaction, the chef did come out and discuss our concerns, defending the preparation and noting its popularity and lack of previous complaints. I can't imagine other diner's finding this preparation acceptable. We offered up our oft-visited Angeli's Restaurant in Naperville as a splendid example of fabulous Gorgonzola feature entree's. We should've also mentioned Angeli's superb mussels offering as well as it is also spectacular and superior to the Ivy Restaurant feature.We were offered the entree be removed from the bill but believe this did not happen given its hard to imagine how the bill could be $250 (plus the $50 tip).

All in all our experience was disappointing and regrettably we will not likely return soon to or recommend Ivy Restaurant in Wheaton.