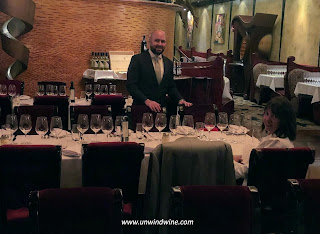 The themed dinner - "A Night in the Cypress" featured a six course dinner prepared by Executive Chef Jose Torres with wine pairing accompaniments for each course from Villa Calcinaia.

The evening was held in the Italian Village Vivere dining room, the upscale of the three restaurants that make up the Village with its unique funky elegance.

Kicking off the evening, the full house was welcomed by Italian Village Proprietor and General Manager Gina Capitanini. 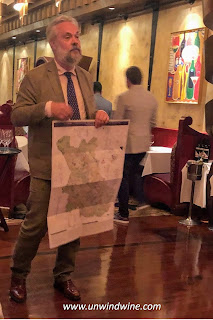 Sebastiono was delightfully engaging, he presented the history of the family, the estate, their vineyard plantings and a perspective on each wine. He revealed surprising impressive insights and knowledge of Chicago and even Indiana, as several of our fellow 'Pour Boys' (our wine group), Dr Dan and Ernie, and their guests were Hoosiers, having traveled into the city to accompany me and wife Linda for the evening event.

As is typical with these events, the pairing of the wine with the food was extraordinary - amplifying the enjoyment of both.

The Calcinaia property has been in the Capponi family dating back to 1524  when Sebastiano del Caccia and Niccola di Andrea Capponi sold to Capponi "four poderi (self-contained agricultural units) a gentleman's house and two buildings in a place called Calcinaia overlooking the road to Greve, the drive in front of the Villa today.

In the mid 16th century Calcinaia was considered important enough to be depicted in the maps of the Captains of the Guelph Party. The buildings enclosed by a wall, included the "house of master Giovanni Battista Capponi", a look more in line with the rank of its owner, a high-ranking official and future senator of the Granduchy of Tuscany.

The original four poderi of 1524 - Sepale, Calcinaia, San Piero al Pino and Bastignano - were increased in number through the years: Casarsa, in 1643 and the rest during the following two centuries. Calcinaia remained a simple country house until the second-half of the eighteenth century, when Count Ferdinando Carlo Capponi, a first-class administrator, reorganized the property in the Greve valley, building a fermenting cellar, storage cellars, the lemonhouse, and the rear section of the Villa that had been refurbished some fifty years earlier by Count Ferrante Capponi, who also added the Chapel.

The estate has a historic heritage of vines and olive trees dating back to the end of the 19th century. Villa Calcinaia consists of 450 acres, seventy planted to vines in twenty-six different plots, the remainder in olive groves, surrounded by forests. The old vineyards were planted between 1959 and 1975 with more added later.

The estate sits alongside the Greve river that divides the valley in two sides with different soils on each side. The right bank is characterized by the mountain range known as “Monti del Chianti” and the soil there comprises primarily sandstone and sand formed by the break-up of the bedrock of these mountains. The left bank, where Villa Calcinaia stands, is of Eocene origin with calcareous clay, the predominant soil type of the area.

The name Calcinaia can be translated as 'chalk quarry', the material necessary for the making of mortar. The calcium can be found in great abundance on the estate and creates a certain fil rouge between the different soils.

There are also important differences in the various vineyards' varying elevations, from 200 meters to 350 meters above sea level, and varied exposure as well as many small tributaries of the Greve river crossing the estate. On the lower grounds, patches of soil have grey clay, called in tuscan dialect “mattaione”. Generally, the soil in Calcinaia is loam; deeper soils with higher presence of sand in the lowers slopes towards the Greve River, and shallower silty soils with abundance of rocks on the higher grounds, known as “galestro”: a clayey schist whose exfoliating structure, crumbly surface, permeability, pebble content and wealth of trace elements ensure the vine’s vegetative balance and characterful wines.

Above the altitude of about 300 meters, there are outcrops of “alberese”, a calcareus marl more typical of the area of Gaiole that contributes to the wide array of soils at Calcinaia.

The La Fornace vineyard was planted in 1975 by the Toti family, sharecroppers who had run the “podere” Le Fornaci from the beginning of the twentieth century. In 1975 the three brothers Natale, Renato and Adolfo, in agreement with the owners, planted just over a hectare of Sangiovese. American vines were also planted before being grafted after a few years with Sangiovese taken from the other vineyards of Villa Calcinaia.

The La Fornace vineyard has a southern exposure lying nearest the river Greve, characterized by a greater presence of sand and the typical gray clay, like that which is still used for the production of bricks. This increases the complexity of the soil and is the basis for the name La Fornace. Sangiovese grown here reflects the specific soil texture of La Fornace, similar to those that grown on the right bank of the river Greve and often described as the most “Lamolese” of all the crus of Villa Calcinaia.

The wines sourced from here are characterized by a very fragrant and elegant wine, defined by fine and graceful tannins.

Over the last ten years, Villa Calcinaia has renewed many of the vineyards to achieve increased production of Chianti Classico wines. The renewal and restoration program included crafting the terraced land thereby allowing the vines to be planted following the contour line rather than the high East incline. They were planted with historical clones of Sangiovese determined through examining each vine on the plots of land originally developed by the sharecroppers. From this generation of vineyards, planted on a clayey and calcareous soil , surrounded by a pine forest, is the Bastignano vineyard. Since the 2006 vintage, this sources production of Chianti Classico Sangiovese, designated Vigna Bastignano after the name of the vineyard.

From the unusual microclimatic warmth and the exposure, Bastignano produces wines with character of light, ruby, sunny and spicy bouquet and a distinct soft elegance of taste. This was the single vineyard designated label served with tonight's dinner.

The third vineyard selected for a single vineyard designated bottling, Contessa Luisa, was planted by Ferrante Capponi in 1959. The block was dedicated to his mother Luisa Vonwiller and remains today the oldest vineyard still in production at Villa Calcinaia. The two hectare plot is located on a hill facing west, the only such one on the Estate, which receives the warmth of the afternoon sun. The soil is characterized by a strong clayey character and a good depth.

The American vines were grafted with the Estate mass selection Sangiovese varietal, as well as a small amount of other varietals that make the vineyard population more diverse and vibrant. Wine produced from this vineyard tends to have a very rich and opulent nose, characterized on the palate by an imposing tannic structure, resulting from the clayey nature of the soil.

The dinner courses and wine pairings menu shown below: 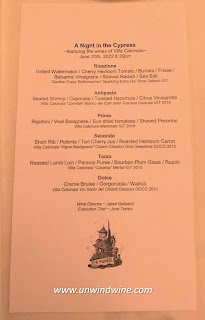 The dinner courses and wine flight were designed by Jared and Chef Jose Torres, curated by special guest Sebastiano Capponi, the owner of the estate, who talked about each wine course and the history of the vineyard. 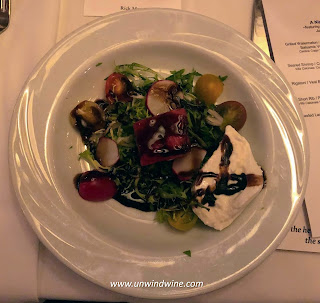 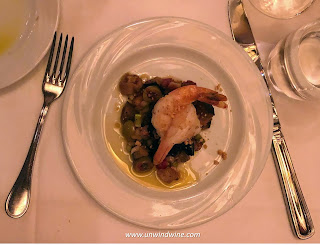 Like all the Villa Calcinaia wines, this is 100% estate grown fruit from vineyards planted in 1967 following a major flood in the area. The Comitale grapes were not the intended selection but were retained when they were found to be useful for producing this unique white wine.

Significantly enhanced when paired with the food. Straw colored, light bodied, exotic and rich, aromatics and flavors of citrus, hints of pineapple, floral, mineral and stone fruit with crisp acidity. 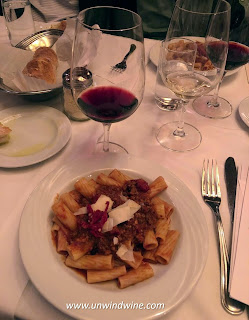 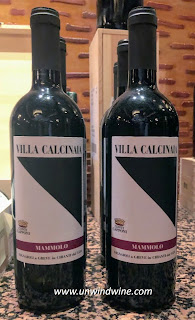 This is a unique grape varietal indigenous to Tuscany and is very rare, almost extinct in the region. It is not recognized or sanctioned by the Chianti appellation rules and therefore is not allowed as a blending grape with DOC Sangiovese wines. It stands alone in its character and flavor profile, more herbal than fruity, high in acid low in tannins, it goes well with charcuterie and was an ideal pairing with the Veal Bolognese.

Although widely planted, Mammolo is a black berry varietal grown variously in Central Italy. It gets its name from the distinctive aroma of violet that characterizes its wine, ruby red in color, floral nose with typical hints of violet.

When the weather is hot and low alcohol wines are preferred, Mammolo is a popular alternative to whites and roses of Tuscany with their character of wines with high acidity with low tannic content. They are popularly served paired with charcuterie. 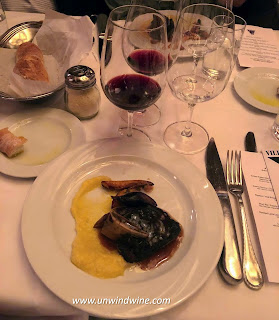 This is a one of the three premium Villa Calcinaia's single vineyard designated wines - each 100% Sangiovese, which as Sebastiano explains, is especially 'transparent' in reflecting the unique terroir of each vineyard site.

Vigna Bastignano vineyard is rocky soil and produces spicy fruit that are low in tannins. Only 3,092 bottles were produced. 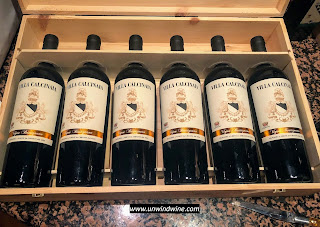 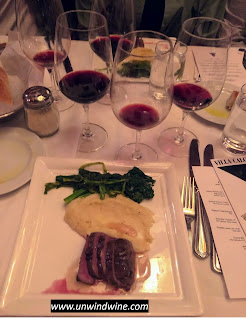 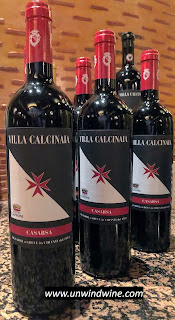 This 100% Merlot based wine is a Super Tuscan sourced from Villa Calcinaia estate grapes that were planted in 1967 by mistake - not intended to be a Merlot planting at the time since it was not a recognized varietal in the DOC appellation rules. As the vines matured, they were found to produce wonderful Merlot fruit, worthy of standing on its own in its own bottling and label.

The parsnip puree was the to-die-for highlight of this dish! ... with the Bourbon Plum Glaze! 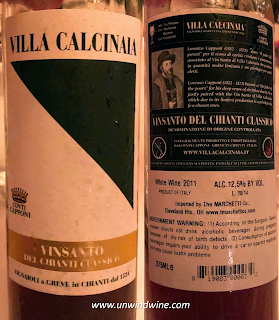 This wine is held and aged for ten years before being released. Hence, the butter color at time of blending and production, has darkened to tea color by the time the wine is released.

This dessert wine is a blend of the white grape varietals Trebbiano and Malvasia, together with a portion of the red grape Canaiolo. The blend for the 2010 vintage was 70% Trebbiano, 15% Canaille and 15% Malvasia.

The harvested grapes are dried naturally in the estate’s drying room for several months to allow the sugar content to concentrate to produce this traditional Tuscan dessert wine.

By February the grapes have reached about 350/400 grams of sugar. They are then pressed and racked in tiny Slavonian 'caratelli' oak barrels for an extended 96 months.

This aging allows the sweet must to ferments for the period of eight to ten years with occasional refilling to restore the 'angel's share' that evaporates from the barrels before bottling.