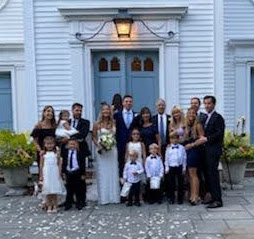 The family gathered in Conneticut for son Alec and Vivianna's gala wedding weekend; we started off the festivities with a dinner with the wedding party, generously hosted by the B's, our new in-laws.

The Big Green Truck with its on-board Pizza oven was on-site and prepared a broad selection of custom hand-made pizzas made with the finest ingredients and toppings.

It was a perfect food-wine pairing with the California Cabernet Cuvee' Bordeaux Blend from Alec’s birthyear vintage, served from a 6 liter large format Imperial bottle I brought from our cellar collection for the occasion, as well as several other wines served.

As I presented the big bottle, I discussed the irony of it being one of our 'V' wines, this one also featuring a boat on the gold painted bottle, in light of the fact that I acquired this bottle decades ago in anticipation of this event.

Frank B, father of the bride is an avid boater and the wedding party men spent the afternoon on his boat cruising the Westport and Southport Conneticut coast of Long Island Sound (below).

The special limited release commemorative bottle was signed by Quivira Vineyards and Winery founders and then owners, Henry and Holly Wendt. It came packaged in its own OWC, Original Wood Case. 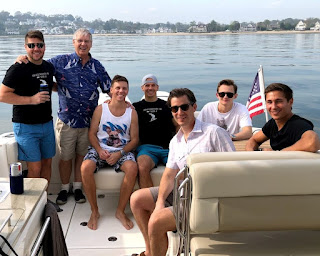 Quivira Vineyards has a long history of significance in the evolution of grape growing and winemaking in Dry Creek Valley.
Founders Henry and Holly Wendt sold the property in 2006 to current owners Pete and Terri Knight. They were struck by Henry’s vision for better wine through innovative vineyard management using biodynamic and organic farming techniques.
Since purchasing the winery and vineyards in the summer of 2006, Pete and Terri rallied the Quivira team around a strong sense of purpose and focus on a ‘sustainable, holistic approach’ to growing grapes in the quest of producing distinctive wines.
Today, Quivira’s philosophy is driven by the mission and vision of quality shared between winemaker Hugh Chappelle and owners, Pete and Terri Knight. Together, they have invested in the vineyards and winery with the intent of growing wines based upon the ‘thoughtful commitment to sustainable and organic farming’.
Quivira Vineyards, today, is a leading producer of terroir driven Zinfandel, Sauvignon Blanc, and Rhone varietals. 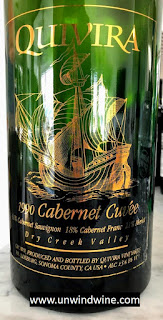 This 1990 Cabernet Cuvee' was sourced from select grapes from the Quivira estate vineyards in Dry Creek Valley at the confluence of Wine Creek and Dry Creek in Healdsburg, Sonoma County. It is a blend of Bordeaux varietals, 61% Cabernet Sauvignon, 18% Cabernet Franc and 21% Merlot. Cellartracker records show this label was produced in the years 1987 through 1992.
I've written in these pages about the impact a large format bottle has on the aging of wine, extending the life and drinking window of a wine due to the larger vessel and its reduced air to wine surface area and greater volume for increased stability for more graceful and consistent aging.
This wine exceeded my expectations with its drinkability, still showing vibrant fruits and showing little sign of diminution from aging. This is most certainly attributable to the large bottle and to the quality of the 1990 vintage harvest.
Sons Alec and Ryan, the groom and co-best man, carefully removed the wax capsule seal and extracted the cork, in near perfect condition, using a Ahso, two pronged cork puller. Shown below with our host, father of the bride, Frank B, and the boys, the 6 liter Quivira. 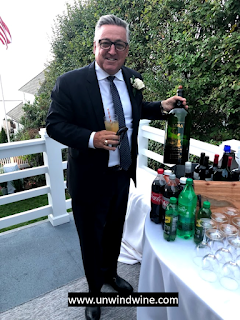 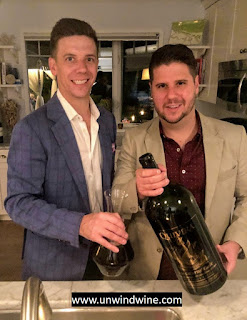 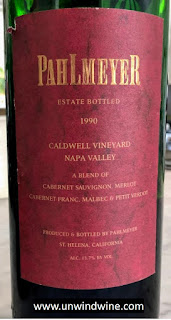 The wines continued the following evening for the wedding banquet served in a magnificent setting on the lawn under the tent in the yard overlooking the Sound.
Following the Quivira, we opened another large format bottle, a magnum of Pahlmeyer Napa Valley Caldwell Vineyard Red Blend, also from the same birthyear vintage year 1990.
Pahlmeyer Proprietary Red is a classic Napa Valley Bordeaux Blend of Cabernet Sauvignon, Merlot, Cabernet Franc, Petit Verdot and Malbec, all sourced from the Estate Caldwell Vineyard.
I wrote about this wine when I served a companion magnum of this bottle and label during a family gathering earlier this summer, the week of the original planned wedding event before being postponed due to the Covid Pandemic.
To round out the flight of wines for the evening, Alec served his namesake signature wine, Alec’s Blend Napa Valley Red Wine from Lewis Cellars. This is another family favorite label from a favorite producer, featured often in these pages.

Son/brother Ryan gifted six bottles of recent releases of this label to Alec, and I swapped them with a vertical tasting flight from our cellar from the ‘99, ‘01, ‘03, ‘05, ‘07 and 2009 vintages. These were served alongside the current 2017 release. 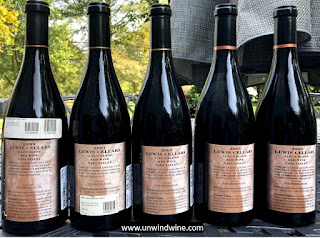 Following the wedding weekend, the bride and groom headed off to Napa to pay homage to the vines and visit several family favorite producers including Lewis, Del Dotto and several others, firestorm permitting. Alec and Vivianna have a planned visit to the Lewis Cellars Winery in Napa on their re-planned Honeymoon to Napa Valley. 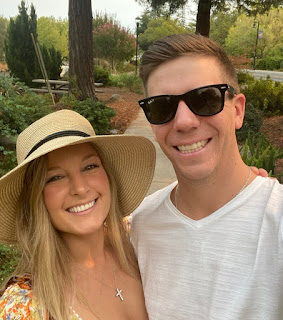 We also served for the weekend another bold vibrant proprietary red blend from Venge Cellars. Venge Scout’s Honor features a prominent ‘V’ on the label, a fun whimsical play on the initials for the bride Vivianna and a testament to the vineyard dog Scout of the Venge family, and a tribute to Alec and Vivianna’s new dog, Camella.
Venge is another popular label and a family favorite. We have known and collected wines crafted by Nils Venge, the first California producer to craft a 100 point wine from the pundits, since his early days as a producer, and when he was consulting winemaker to several popular labels including Plumpjack, Del Dotto, Fantesca and others.
Following the wedding ceremony, Frank and Mary-lisa, Vivianna's parents, hosted a magnificent gala celebration dinner in a tent on the lawn at their home overlooking Sherwood Island and Cob Cove on the Long Island Sound. 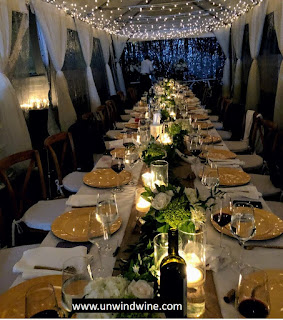 The spectacular dinner featured prime filets of beefsteak and salmon entrees. This was a much abbreviated scaled down celebration from the originally intended and planned banquet at their club, which will now be rescheduled for another time.
To contribute and join in the celebration dinner, I brought from our cellar a flight of very special wines I have collected over the decades and held for this occasion, from the birthyear vintages of the bride and the groom.
Three of the wines were each awarded #1 Wine of the Year by Wine Spectator Magazine as part of their annual Top 100 Wines of the Year, all from the 1990 vintage. A testament to the global success of the vintage, one was from California, one from Bordeaux and one from South Australia, a further testament to the amazing spectacular 1990 vintage.
All these wines were acquired upon their release back in the early nineties, in some cases, even before being so recognized and heralded.

I blogged about these wines and big bottles in a preview to this weekend's gala festivities.

This 1990 vintage release was the Wine Spectator Top 100 #1 Wine of the Year for 1993 and was awarded a perfect 100 points. We also served this wine from a six liter Imperial from daughter Erin's 1981 birthyear vintage, at her and son-in-law Johnny's wedding celebration.

This 1990 vintage release of this label was the Wine Spectator Top 100 #1 Wine of the Year for 1995. This was the concensus WOTN - Wine of the Night by many in the group, especially the younger generation. I acquired an OWC - Original Wood Case of his wine back on release. I remember obtaining it at Berry Brothers and Rudd in London and hand carrying back on the flight, back in the days when such activity was allowed.
We opened a bottle from this case with Alec and Vivianna when we visited them in New York to celebrate their engagement.
My notes from that previous tasting earlier: Dark garnet colored, medium-full bodied, flawless, elegant, polished, harmonious, perfectly balanced, silky smooth flavors of concentrated black berry and black raspberry fruits with notes of vanilla, licorice, spice, black truffles and oak with hints of spice and cedar turning to fine grained tongue puckering tannins on the long lingering finish.
RM 96 points.

This 1990 vintage release was Wine Spectator Top 100 #1 Wine of the Year for 1994. The 1990 vintage was so successful that nine of the Top Ten Wines of the Year in 1994 were from the 1990 vintage.
To further celebrate the nuptials, I also brought several wines that we happen to hold in our cellar from the birthyear vintage of the bride including the Caymus Special Select 1991, in addition to the heralded #1 1990 vintage. Testament to this producer and their run of great releases, the 1991 was awarded the #2 wine of the Top 100 Wine Spectator Wines of the Year 1995. So, this mini-vertical duo of back to back vintages were #1 and #2 respectively in the Top 100, likely the first and only time that I can find that this has happened. 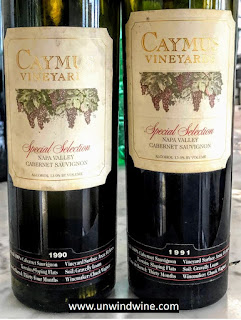 I also brought back-to-back '90 and '91 vintages of Silver Oak Cellars Cabernet Sauvignon. Had the Coronavirus pandemic not derailed the couple’s original wedding plans, I was prepared to serve Silver Oak Bonny’s Vineyard Napa Valley Cabernet Sauvignon 1990 from six liter bottles, (serial numbers 41 and 44). They remain stored in our cellar in their OWC - Original Wood Cases (shown below). We will hold these for (a) future celebration occasion (s).
We served the 1982 vintage of Bonny's Vineyard from son Ryan's birthyear vintage at his and daughter-in-law Michelle's (below) wedding celebration, along with a horizontal collection of other birthyear vintage wines, several from large format bottles. 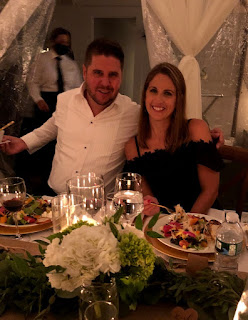 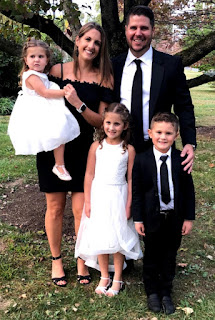 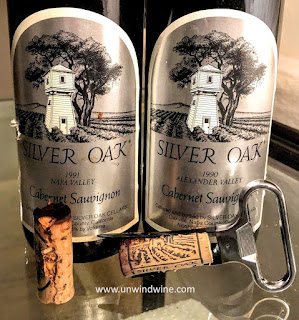 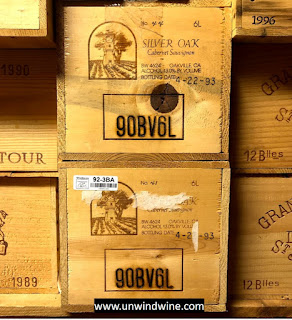 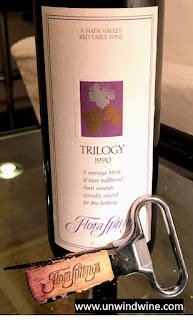 We also brought along and were prepared to open but didn't get to them, bottles of Dunn Vineyards Napa Valley Cabernet Sauvignon, 1990 and 1991.
In all of these comparison tastings, the 1990 vintage showed significantly better than its 1991 counterpart, evidence that vintages matter. I've written in these pages that often, off-year vintages can out-perform, and, that in top exceptional years, all boats rise with the tide, and second and lesser labels can also be exceptional, often providing great QPR (quality price ratio) values. Tonight, though, we were fortunate enough to serve and partake of the best of the best - best wines of the best vintages!
We are still holding and looking forward to opening from our cellar collection birthyear vintage bottles of our kids and our anniversary years from our horizontal and vertical collections of several favorite Bordeaux producers including Chateaux Leoville Las Cases, Ducru Beaucaillou, Palmer, Pichon Longueville Comtesse de Lalande, Gruaud Larose, Chateau d'Yquem and a few others. We're still holding many of these as they appear to have longer drinking windows and hence can be held a bit longer. We visited several of these Chateaux during our Bordeaux region trip last year. We'll look forward to featuring them in future family celebration tastings.
After dinner, with the wedding cake, we served from our cellar Chateau Lafaurie Peyraguay and Chateau Suideraut Grand Cru 1990. We're fortunate to hold some Chateau d'Yquem 1990 as well, but will hold this for appropriate celebrations in the future due to its extraordinary long aging and drinking window. We were also prepared to open and will also hold for future events a Warre's and a Dow’s Quinta de Cavadhina Ports from 1990. 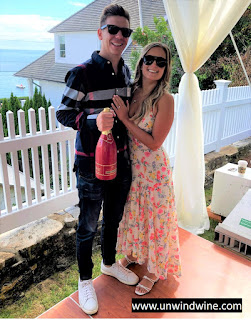 Prior to dinner, and throughout the evening, we served large format magnum bottles of Pieper Heidseick Special Edition Champagne (above).

Lastly and notably, this follows by just three weeks the wedding celebration and serving of other large format and birthyear wines at son Sean's and daughter-in-law Michelle's wedding earlier this month.