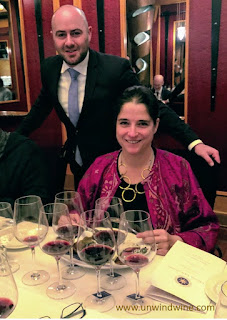 In the 1920s the Marchese Mario Incisa della Rocchetta dreamt of creating a ‘thoroughbred’ wine and for him, as for all the aristocracy of the time, the ideal was Bordeaux. This is how he described it in a letter to the esteemed wine critic, Luigi Veronelli dated 11 June 1974: “…the origins of my experiment date back to the years between 1921 and 1925 when, as a student in Pisa and often a guest of the Salviati Dukes in Migliarino, I drank a wine produced from one of their vineyards…which had the same unmistakable “bouquet” as an aged Bordeaux….”

In the 1940s, having settled with his wife Clarice on the Tenuta San Guido on the Tyrrhenian coast, he experimented with several French grape varieties (whose cuttings he had recovered from the estate of the Dukes Salviati in Migliarino) and concluded that the Cabernet had "the bouquet I was looking for."

A wine made mainly from Cabernet Sauvignon was a fundamental change to the Tuscan and Piedmont tradition of Sangiovese and Nebbiolo, respectively. The innovative decision to plant this variety at Tenuta San Guido was partly due to the similarity Mario Incisa had noted between Tuscan terrain and that of the Graves area in Bordeaux.

‘Graves’, or ‘gravel’ in French refers to the rocky terrain which distinguishes the Bordeaux area; similarly, the gravely vineyard sites in Tuscany impart the same characteristics on Sassicaia, "stony ground", as its cherished French brother.

The Marchese's first vintages were not warmly received. Critics accustomed to light, local wines were not encouraging; it was not taken into consideration that wines made from the more complex Cabernet Sauvignon grape would need more time to mature and develop. And thus from 1948 to 1967, Sassicaia remained a strictly private affair, only to be consumed at Tenuta San Guido.

Each year, a few cases were stored to age in the Castiglioncello di Bolgheri cellar. The Marchese soon realized that by ageing the wine it improved considerably.

Friends and relatives now urged Mario Incisa to experiment further with his project and perfect his revolutionary winemaking style. It was not until 1968 that Sassicaia was first commercially released – the welcome was worthy of a Bordeaux Premier Cru.

Over the next few years, the cellar was moved to a temperature controlled location, steel fermentation vats replaced wooden vats, and French barriques were introduced to the aging process.

And the rest, as they say, is history. Since then, Sassicaia has been produced in the style of a Left Bank Bordeaux Premier Cru - 85% Cabernet Sauvignon and 15% Cabernet Franc. 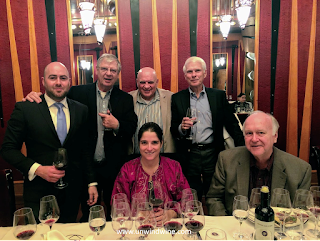 On this night, Italian Village in Chicago hosted co-owner of Tenuta San Guido co-owner Pricilla Incisa della Rocchetta. A special menu course was prepared to complement a flight of eight vintages of Sassicaia, served from the cellars of Italian Village by Wine Director and co-host Jared Gelband and the Vivere Restaurant staff.

The dinner was featured in a Forbes.com article submitted by wine write Tom Hyland and included a picture of Ernie seated next to Priscilla. 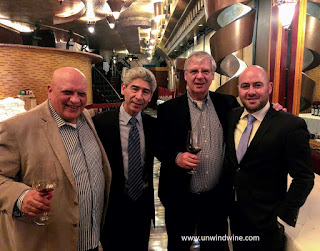 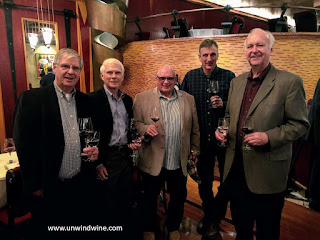 Priscilla spoke of the history and heritage of Tenuta San Guido, then introduced each course with an exposition of the vintages and the releases. 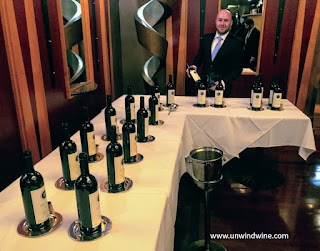 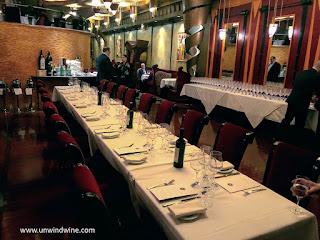 Prior to the courses we were served Tenuta San Guido Guidalberto Toscana 2017- a Bordeaux varietal comprised of Merlot.

With the dinner courses we started with Sassicaia 1998 and 1999, two contrasting vintages - a warm year and a moderate year - served alongside chanterelle mushroom plate - a perfect food wine pairing! 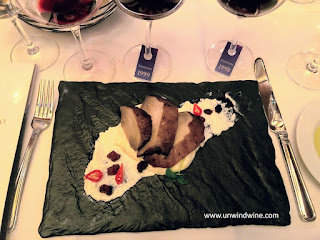 Next was an incredible lamb ragu in bolognese sauce with pasta served with Sassicaia 2000 and 2001. This was another incredible food wine pairing experience - perfectly matched complementary tasting profiles. 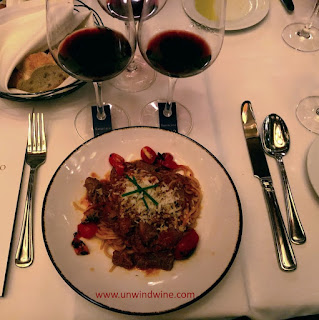 This was followed by ribeye steak in a rich red wine reduction sauce served with Sassicaia 2004 and 2005, another contrast in two disparate vintages - a warm and a moderate year. 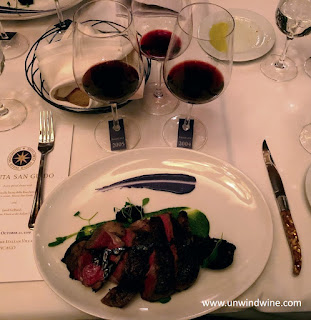 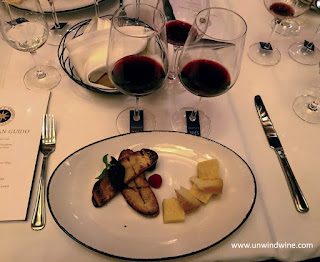 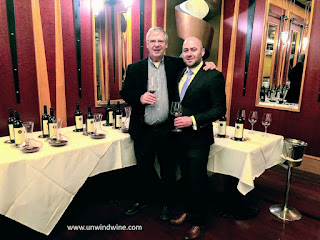 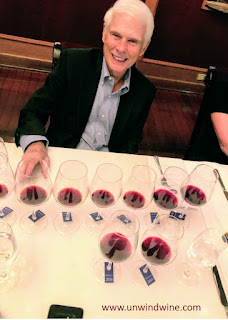 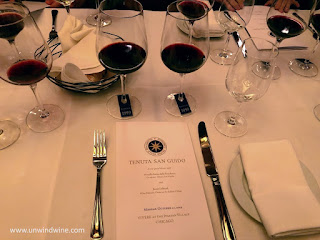 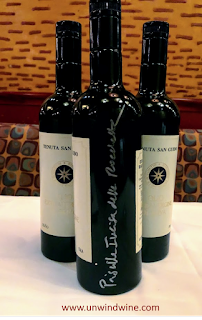 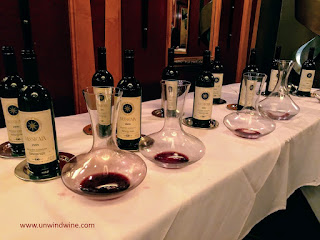 Posted by UnwindWine at 5:06 PM