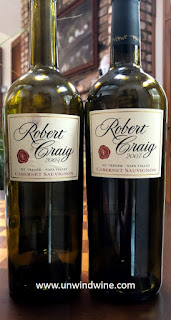 Writing about our tasting Robert Craig Affinity last week, I was sobered to learn of the passing of founder and former owner/producer Robert Craig. As a result, in response to the news, I selected several Robert Craig labels to taste with several special dinners this week, in remembrance of and in tribute to Robert. As we opened and released each bottle we toasted Robert and offered our thoughts and prayers to Lynn.

I recall Robert telling us on numerous occasions that his favorite label was the Mount Veeder (Napa Valley) Cabernet Sauvignon. This was likely in light of his early years managing vineyards up on Mt Veeder on behalf of Hess Collection, and then Robin William's winery (Toad Hollow, named for his brother Todd, whom he couldn't say the name as a child), and then his long history sourcing fruit from vineyards there to supply one of his key labels, the Mt Veeder Cabernet of the Robert Craig portfolio. This long association ended just a couple of years ago with the purchase of the vineyards by the French conglomerate from the estate of the departed Robin Williams.

Robert Craig in Napa Valley was founded in 1992 when Robert Craig, a former general manager of The Hess Collection winery, struck out on his own. Craig wanted to make small quantities of Cabernet Sauvignon from distinct Napa Valley appellations. Over the years, he acquired and produced wine from the 9.5-acre estate vineyard high atop Howell Mountain. Robert Craig also sourced grapes from Spring Mountain, Napa Valley, Mt George, Atlas Peak, and of course his beloved Mt. Veeder. He often referred to his portfolio of Napa Valley Cabernet Sauvignons as 'three mountains and a valley'. He also sourced fruit and produced Napa Valley Chardonnay, Zinfandel and on some occasions a Syrah.

Robert attended the University of Chicago and hence we believe he always had a fondness for Chicago. He ventured here at least once on a wine release tour and we met him in the City at a tasting event. As partner and winery executive Elton wrote in his tribute to Bob, "To be introduced to Bob was to receive a hug from Bob". That day, in Chicago, Bob and Lynn walked into the venue and Bob spotted me across the room and made his way through the crowd towards me, came up to me and gave me a big hug! 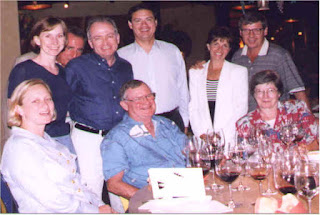 He was also a former merchant marine seaman. Back in 1999, we hosted a wine dinner featuring him and Lynn at the CIA in St Helena. That day, the tall ships sailed in to San Francisco Bay. Robert had gotten up a 430 am drive down to the city to see the tall ships, then drove back late afternoon to join us for dinner (shown right - Reuben Katz of CIA hiding in back).

I remember he was rejoicing in the fellowship and wine and had a special teary twinkle in his eye. Upon asking him if he was okay, he lamented, 'this was one of the best days of my whole life!". Such was the kind and content, joyful Robert Craig. 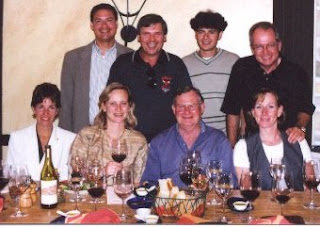 We also hosted a wine dinner at the CIA featuring Robert the year before in 1998 and he brought along his winemaker Rudy Zedema (shown left, rear next to me) whom he was no doubt mentoring. Robert and Rudy are pictured with our group, Andy, Liat, Linda, and me.

To heighten the significant and poignancy of the occasion, Sister Jan and Brother-in-law Bill were in town this weekend for a family event. They were with us during a couple of our Robert Craig special events and some of our memorable visits to the Robert Craig Estate up on Howell Mountain including a picnic lunch we had there back in 2007 (below).


Our records show we still hold in our cellar nearly four cases of fifteen different vintage releases of this label spanning the three decades since its release. 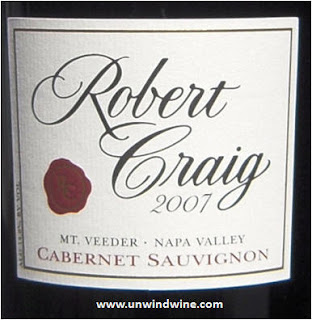 We visited the Robert Craig estate winery high atop Howell Mountain on several occasions, including the Robert Craig Howell Mountain Harvest Party '09 back in 2009, when we first tasted some of the 2007 vintage release labels from barrel and when we would have acquired this wine. Robert Craig Napa Valley Cabernets, which are instantiated in at least six different labels including this vineyard designated select Mt Veeder, are one of the largest producer holdings in our cellar collection.

The previous time we served this wine at one of our wine dinners, it was poignant tasting and reminiscing over this wine. We recalled tasting this wine with Robert Craig on numerous occasions and he recollecting this is his favorite of the vineyard selections. We talked of the recent end of the supplier relationship for this fruit source as the legendary Pym Rae Vineyard, previously owned by the late Robin Williams, was sold to a major French producer who acquired the sixteen hundred acre estate and plan to enter the Napa Valley marketplace. We recall Robert's reminiscences of Robin for whom he worked and managed the vineyards back in the nineties. 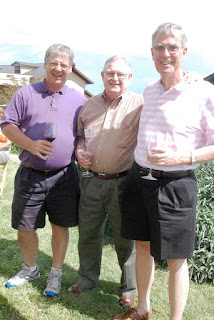 Fellow wine buddy and 'Pour Boy' Bill C (above with Robert and me) was with us on our most recent visits to the Robert Craig Estate, harvest party and tasting events. He and Beth C were with us when we acquired several of our releases of this label in recent years and we were both members of the Craig wine club.

Bill's Cellartracker notes on this tasting:

"Big full bodied Mt Veeder. Medium garnet in color. Nose musty upon opening but reveals pencil shavings with some light floral notes. Dark cherry, raspberry, mocha and a hint of mint on the finish. Bigger and bolder than most Mt. Veeder. Medium bodied with a long, lingering finish." 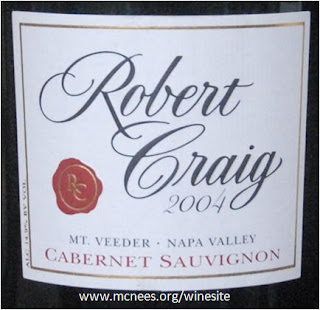 We also opened a 2004 vintage release of this same label - a 'vertical' selection - multiple vintages of the same label. Obviously similar to the 2007 release above since its essentially the same wine, sourced from the same vineyards and crafted by the same winemaker and processes. The 2004 was a bit less fruit filled and forward, a bit tighter and subdued, but very good none-the-less.

This release got 92 points from Connoisseur's Guide and Wine Enthusiast.

Posted by UnwindWine at 5:22 PM