For a midweek grilled steak dinner we selected this Plumpjack Oakville Cabernet. We first discovered Plumpjack during our Napa trips back in the mid-nineties. We hosted Plumpjack winemaker Mary Pisor for a wine producer dinner that we held at Meadowood Resort back in 1999. We tasted adjacent vintages of this label at that dinner against top tier Bordeaux. We sourced this wine during our winery visit that year. Ever since, Plumpjack has been one of our favorite Napa Cabernets that we like to serve for special occasions, and one of our favorite winery venues in Napa Valley.

The quaint PlumpJack Winery sits in the heart of Napa Valley’s renowned Oakville region, surrounded by it's 42-acre estate vineyard. The winery building and the vineyard date back to the 1800s, when winemaking pioneers first took advantage of its unique position on the valley floor; the east side of the vineyard lies along the foothills of the Vaca mountain range, and the west side of the estate lies adjacent the Napa River flood zone.

Plumpjack has one of the more interesting heritages having been founded by some of the most notable and colorful characters on the California wine scene - Gordon Getty, Composer, philanthropist, and entrepreneur, and the fourth child of legendary oil baron tycoon J. Paul Getty, and Gavin Newsom, fourth-generation San Franciscan who was elected to consecutive terms as Mayor of the city and now serves as Lieutenant Governor of California. 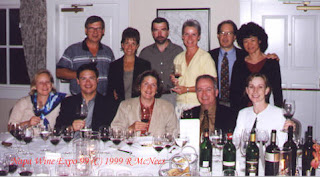 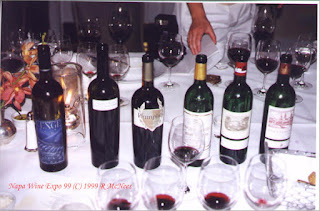 Tonight's tasting was consistent with my tasting notes from back in 2009 when I wrote, "Dark berry, currant, black licorice, leather, hints of tar and cedar with a firm tannin finish." 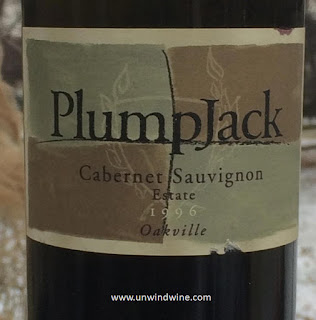 At release this was projected to have "a long and vibrant life of more than 12 years." Well here it is at fourteen years showing no sign of diminution whatsoever tempting promise of at least another half decade of enjoyable drinking, so we'll not rush the remaining bottles in our cellar."

Tonight showed the same profile with full floral notes, black fruits, anise, leather and hints of tar and cedar and a firm tannin finish. At 21 years of age, this is past its prime as it is showing its age as the berry fruits are giving way to the non-fruit tones of leather, tar and anise. The most predominant tone at this stage is the layer of cedar or almost a eucalyptus tone that accents the fruits. Still, this is well within its drinking window but should be consumed over the next couple of years as it will assuredly continue to diminish further.

I am glad we opened this tonight, not only since it was delightful with our grilled steak, but it offered a chance to calibrate its aging and our planning for consuming our remaining bottles including a couple of Reserve labels from this and adjacent vintages. We hold about a half dozen vintages of this label dating back to to their inaugural release in 1995. 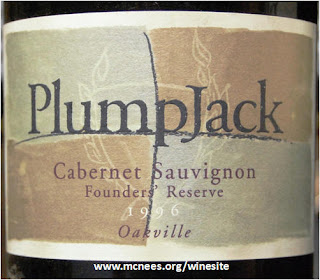 Interesting that Robert Parker wrote in his Wine Advocate - "Aged in 100% new oak, the 1996 Cabernet Sauvignon is an elegant, stylish, black currant-scented wine with good flavor and richness, medium body, and an attractive spiciness. Offering black fruits and plenty of pain grille, it is a good effort. In 1996, there was no Reserve Cabernet Sauvignon. As the winery explained, all the grapes came in at the same time and were equally fine, so nothing needed to be culled out. (RP) (12/1998)."

I am not sure how to explain or reconcile his report or the winery's attestation of no Reserve for the 1996 vintage as we hold some as evidence shown in the label picture herein!