The 'Pour Boys' gathered for the annual Winers and Diners Cityscape Deck Dinner hosted by Lyle and Terry F in their west loop dual condo. Since they first moved to the neighborhood it has undergone an incredible renaissance transformation with the Oprah Harpo studios being demolished and replaced by the McDonalds World HQ complex, Google and numerous other hi-tech firms moving into the new developments in the area. 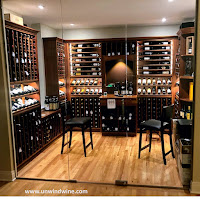 Of course one of the most distinguished highlight features of their residence is the extraordinary adjoining deck with views of the skyscrapers of the nearby loop.

The evening was perfect with ideal weather conditions of a pleasant early autumn evening.

Lyle and Terry prepared grilled filets of beef, scalloped potatoes, brussel sprouts from Duck Inn Chicago, where we ate as a group recently, ceasar salad, green beans and carrots.Prior to the main course they served grilled scallops, and a selection of artisan cheeses, olives, and deviled eggs.

For the wine flight planning, I suggested Bordeaux Blends to accompany the beefsteaks.

I had an aged vintage Joseph Phelps Insignia from 1989, one of Bill and Beth's sons' birthyear.
That, coupled with Dan's deep vertical of, and collection of this label as a long time club member and collector, I suggested we bring Insignia's from our cellars, for those of us that had such.

We visited the magnificent Joseph Phelps Winery and Vineyards in Napa Valley together during our Napa Wine Experience in 2017, one of the highlights of that trip.

So, our wine flight was anchored by the vertical of Phelp's Insignia consisting of: 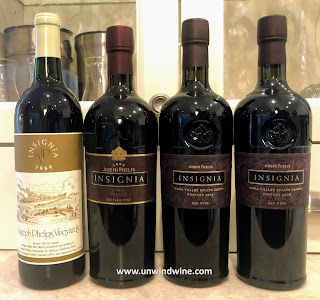 Note the three generations of wine labels during this period.

Prior to the red flight we had a selection of white wines including French Champagne and California Methode Champonais Sparkling Wine. 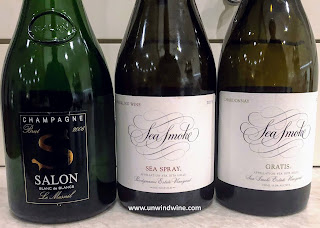 John brought the Salon Les Mesnil from his cellar, which has become somewhat of a tradition, and Dan brought the duo of Sea Smoke labels, Gratis Chardonnay and Sea Spray, from Santa Rita Hills. 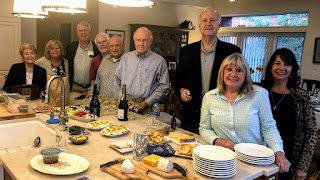 John brought this classic cellar selection that he has brought in earlier years.

This 2006 release was awarded 100 points, a 'Cellar Selection' by Wine Enthusiast, 97 points by James Suckling and Vinous, 96 points by Robert Parker's Wine Advocate, and 95 points by Decanter.

This release from a great vintage for Chardonnay in Champagne was considered perfect by Wine Enthusiast. 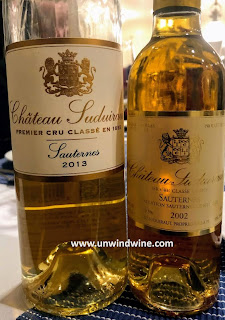 As has become custom and tradition of our Lyle and Terry hosted wine dinners, Terry prepared her delectable, decadent Orange Cake and her cheesecake with chocolate sauce and fresh berries. 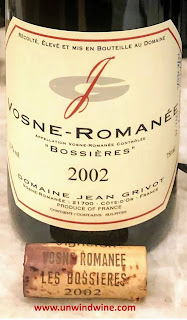 Steve S brought this Burgundy Pinot Noir for opening the red flight as we transitioned from the white wines to the reds.

A different profile and character than the bigger bolder Bordeaux varietals, this Burgundy is based on the native Burgundy varietal Pinot Noir. It was a nice transition wine from the flight of whites to the reds. It was a nice accompaniment to the deviled eggs, olives and selection of cheeses.

Some wine tasting observations from the evening:

The Insignia vertical flight was fun and interesting, as to be expected, as such comparison tastings of multiple vintages of the same label usually are.

We tasted this same vintage release of this bottle at Dr Dan's at OTBN in 2020. Tonight was consistent with that tasting experience when I wrote the following: "Drank adjacent a 2006 Insignia.'

"Garnet colored, slightly opaque, this was medium bodied, lighter than I expected, with dark berry fruits, notes of anise, spice, plums and currants. A mere shadow of the bigger, more concentrated and fruit filled 2006, not due to age, but likely indicative of a lesser vintage and perhaps lesser selection of the fruits."

Tonight, the 1989 vintage Insignia, at 32 years, was in remarkably good condition, showing impressive aging steadfastness in a Napa Valley Cabernet Sauvignon. Indicating excellent provenance cellar and aging conditions, the label, and foil were in excellent condition, the fill level was ideal, appropriate, customary at low neck above the shoulder.  The cork was slightly saturated but generally in excellent condition.

This wine was past its prime but still within an acceptable drinking window, the color was good, dark garnet colored, the structure was medium bodied, holding together nicely, the fruit was still in-tact showing only slight but expected levels of diminution from aging, the black berry and plum notes giving way to tones of spice, earthy leather, tobacco leaf and tea. 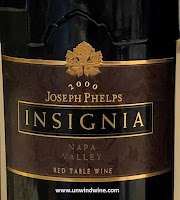 This bottle was one of the surprises of the evening, for the wrong reasons, it was a bit disappointing showing less than we expected and hoped.

Dark garnet colored, medium bodied, black berry and plum fruits with moderate structure and backbone, this too was past its prime, and still within its acceptable drinking window, but more akin to the 30 year old than the dozen year old vintage releases in comparison. The fruits giving way to earth, leather and notes of tea. 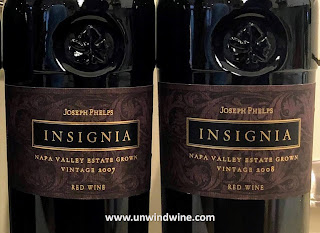 This was one of the standouts of the evening, likely at the apex of its drinking window, dark blackish garnet colored, medium-full bodied, big, forward, complex, concentrated, vibrant bright fruits with dusty, firm tannins, notes of anise, tobacco, cigar box and black tea.

Another surprise of the evening, this was the Insignia profile of the flight, but a bit closed and tight with slightly subdued black fruits, it took a while to open indicating it needs a couple more years to integrate and open to reveal its true character and full flavor profile - still, concentrated, big, impressive and elegant.

This was another standout of the evening, showing well with big bold complexity and concentrated fruits - also likely at the apex of its drinking window, but likely too to age beautifully for a couple more decades.

We saw the legendary St Estephe estate during our trip to Bordeaux in 2018. We hold several vintages of this classic label dating back to the early 80's. This too would make for a marvelous vertical wine flight with its extensive longevity with drinking windows that would span several decades. 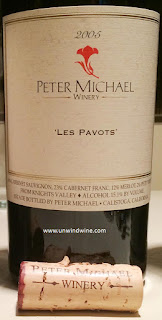 Ernie brought this ultra-premium label from his cellar. Records show he brought this vintage of this label to an earlier Pour-Boys dinner back in 2014.

Les Pavots is an estate bottled Bordeaux blend from the slopes of Mt Helena above the eastern Knights Valley in Sonoma County. This release is a Bordeaux Blend of 63% Cabernet Sauvignon, 23% Cabernet Franc, 12% Merlot & 2% Petit Verdot.


Pour Boys Dr Dan, Bill and I attended our special wine dinner back in June of this year down in Florida when we had this label.  Ernie was not with us that night. but we toasted him noting he collects this label as a member of their club. At that time, I researched and wrote in this blog that Ernie served this same label to us at our OTBN wine gathering tasting in 2014.

Parker likened this wine more to a Right Bank Merlot based blend, "a sensational wine, with a style that suggests a hypothetical blend of a great St.-Emilion and Pomerol".

This was not like my earlier tasting six years ago, when I wrote this was "Dark ruby colored, elegant and polished, full bodied with full complex concentrated layers of blackberry, black raspberry and blackcurrant with tones of black tea, cigar box and hint of dark mocha and cedar on a silky smooth finish," and at that time gave this 95 points.

This was more subdued and modest with the fruit being more restrained and less concentrated and less complex than earlier. Perhaps this was due to the comparison with the bigger more forward wines compared against it tonight.

Tonight I would give this 92 points.

This is a blend of Bordeaux varietals, 93% Cabernet Sauvignon, 4% Malbec and 3% Petit Verdot and was aged in new French oak for 22 months.

Coming across like the Les Pavot, this was more elegant and polished, coming across more subdued and subtle than some of the bigger, bolder more concentrated forward wines. 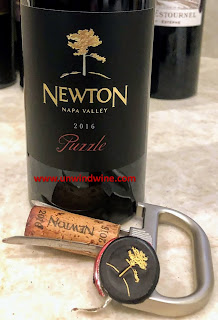 I came across this ultra-premium label recently and picked up several bottles to share and compare, commemorating the wine from this producer that we served at our son's wedding welcome reception a couple weeks ago.

I served that wine from our son Alec's birthyear 1990 vintage from a six liter Imperial large format bottle. Hence I wanted to try a recent release of that wine that has recently appeared in the marketplace.

This is a Bordeaux Blend of Cabernet Sauvignon, Cabernet Franc, Merlot, Petit Verdot and Malbec. It was rated 94 by James Suckling.

This was dark garnet colored, medium full bodied, complex and flavorful black berry and black raspberry fruits with accents of spice, tangy acidity, hints of dark cocao, vanilla and black tea. Yet this was less concentrated and forward than some of the other wines tasted tonight. I put this near the middle of the spectrum. 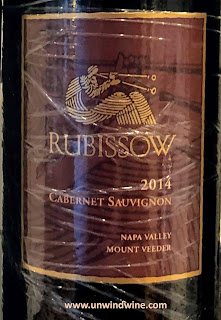 Bill brought this from his cellar from Charleston. We visited this producer estate vineyards high atop Mt Veeder during our Mt Veeder Napa Valley Wine Experience back in 2011. At that time we met with the founder, George Rubissow and tasted and acquired earlier releases of this label. Bill subsequently acquired this later release as well.
In their peak production, Rubissow produced about 5000 cases per year. In 2016, with their vintage release, they announced 'that after 37 years, the property would be taken over by new ownership'. With their 2016 release, they wrote at the time, "When Tim made this wine, he and we didn’t yet know that it would be our final Rubissow Reserve, but just as well."

This bottle was another one of the surprises of the evening, showing bright vibrant expressive fruits and tangy spices. 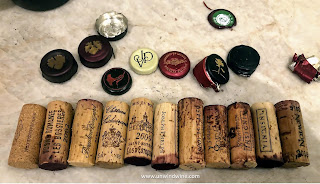 Posted by UnwindWine at 1:38 PM