Last week, we took an extended getaway weekend to travel to neighboring Missouri to explore Missouri Wine. From Illinois, we traveled across the northern tier of the state from Hannibal to Kansas City, then back across the middle of the state with the focal point being the Missouri River. Our intent was to experience Missouri wine, learn the terroir that is distinctive to the Missouri wine producing areas, learn what grapes make up Missouri wine, and other factors about our neighbor and their industry. 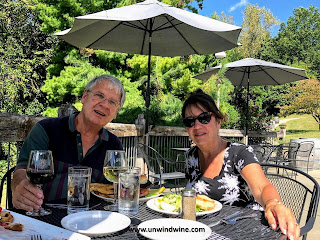 Rather than an immersion in one appellation (AVA), which is our approach to visiting Napa or Bordeaux, after dozens of trips there, as an initial learning and discovery, we did a broad brush tour to get a high level understanding of the Missouri wine trade and its products.

Our visits during our getaway weekend to Missouri were:

We learned the following about Missouri and wine:

We discovered and tasted wines from Missouri producers' vineyards sourced from the Missouri state grape Norton, and the Missouri St. Vincent grape. Other than those, they are not known for any specific varietal or suited to producing one specific variety of grapes such as Burgundy with Pinot Noir and Chardonnay, and Bordeaux with its select varietals. Furthermore, there are no appellation specified or directed grapes that need to be included in the bottle or the blend as in France, and sometimes in Italy.

We also tasted wines produced by Missouri producers, sourced from California grapes while at Le Bourgeois Winery. They produce an American Red Blend from traditionally Spanish varieties – Alvarelhão, Tinto Cao, and Souzao – all grown in Lodi, California, and a Syrah that they produce, also from fruit imported from Lodi. 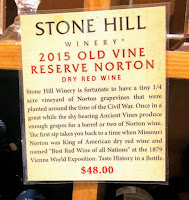 Missouri has more than 130 wineries spread across the state in eleven different regions, and is recognized by the government with four official AVAs - American Viticultural Areas.

Many of the Missouri producers have grouped together in their areas to form 11 unique wine trails. 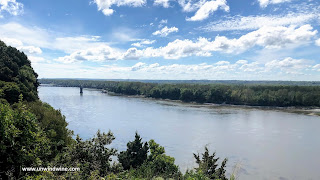 By 1904, there were more than 100 Missouri wineries, the Hermann area alone produced 3 million gallons of wine, mostly by small wine grower/producers.When France’s vineyards were plagued by the phylloxera louse that threatened their entire wine industry, it was Missouri that came to the rescue. When nearly all France's grape vines were destroyed, Missouri’s state entomologist, C.V. Riley, was among the first to discover that Native American grapes were resistant to the pest. Missouri winemakers shipped millions of phylloxera-resistant rootstocks across the Atlantic, ultimately saving the French wine industry.

Missouri is home to the first designated AVA, American Viticulture Area in the US. An American Viticultural Area (AVA) is a designated wine grape-growing region in the United States distinguishable by geographic features, with boundaries defined by the Alcohol and Tobacco Tax and Trade Bureau (TTB).

The Augusta AVA was the first AVA in the United States, accorded to Augusta, Missouri in 1980. While seven California districts and one in Oregon had filed applications with the Bureau of Alcohol, Tobacco and Firearms; the honor went to the 15 square mile area surrounding Augusta. The bureau cited the unique soil, climate and wines, as well as Augusta’s long history as one of America’s oldest and foremost grape and wine districts. In the mid-1800s German immigrants found the Missouri River area just west of St. Louis to be well suited for growing grapes. Napa Valley was granted the second AVA designation named after Augusta in February, 1981.

The other Missouri AVAs are

The eleven Missouri wine regions that have established wine trails for marketing promotion and travel assistance (with compliments and sourced from MissouriWines.org):

4) The Lake of the Ozarks Wine Trail

Any visit to and tour of a fine wine producer, whether it be California, Bordeaux or elsewhere, will entail a discussion about them aging their wines in oak barrels. Invariably, they will mention French Oak of which there are several varieties from several forests, and American Oak. American Oak will come primarily from Missouri Oak, with some coming from Minnesota. 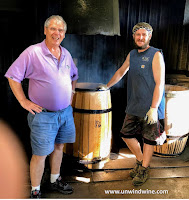 Missouri is the leading producer of American oak barrels for the global fine wine industry, sourced from sustainably managed forests across Central and Northern Missouri. It takes 80 years to grow an American white oak tree to maturity and another two years to properly age stave wood. From there, stave wood is then air-dried for 24 months before fire bending, a technique that makes the wood more pliable for a Master Cooper. There are only fifty coopers in the US, several of whom are in the small town of Higbee, Missouri, where they work at the Oak Cooperage.
We had the privilege of visiting and touring the Silver Oak OAK Cooperage in Higbee, Missouri during our Missouri Wine Experience.

One of the finest and most popular leading American wine producers, whose name is synonymous with oak, Silver Oak winery in Napa, sources their barrels from Oak in Higbee and age their wine exclusively in American oak. They acquired partial interest in the Oak cooperage, to ensure their supply of finest quality barrels into the future, then acquired the remainder, so they now own and operate the business. Beyond consuming about half the production, they source barrels to leading wine producers around the globe.

We learned from our visit to Hermannhof Wines, and Dierberg Vineyards in Hermann MO, that Missourians have ventured beyond their home state to influence wine production in California and beyond. Jim and Mary Dierberg of St Louis purchased the historic winery in Herman, then in 1996, after a long search throughout France and California, purchased a 4,000-acre property in Santa Barbara County, CA. There, they now own and operate two thousand acres of vineyards in Santa Ynez, Santa Maria and Saint Rita Hills wine region AVA's where they produce 15000 cases of premium wine annually under three different brands.

In conclusion, while we did not find any Missouri sourced 'fine premium or ultra-premium' wines for collecting and aging for special occasions or once a month or beyond, Missouri produces many respectable wines for every day drinking, many at great QPR - Quality Price Ratio, value. We did not find any one area that is concentrated with distinctive terroir - soil, micro-climate, proximity, overall 'sense of place' to produce extraordinary wine. There are many regions worth exploring and many venues worthy of visiting as destinations for scenery, history, fine dining and other entertainment, and fun with wine.
Posted by UnwindWine at 8:02 AM