A visit to Château La Nerthe

During our recent trip to Provence we visited Château La Nerthe, one of the oldest estates in Châteauneuf-du-Pape. This was a return visit to the estate that we visited during our first trip to the region back in 1998. We hold in our cellar or have consumed a dozen vintages of Château La Nerthe dating back to the eighties. We also visited the estate of Domaine du Vieux Télégraphe as the other highlight of our visit to the appellations Châteauneuf-du-Pape. The Châteauneuf-du-Pape appellation is named in recognition of the Popes who reigned in the area in the fourteenth century. It actually means "New Castle of the Pope" referring to the time in the 14th century when the pope resided in Avignon, not in Rome. Historic documents noted grape vines covering the territory of Châteauneuf-du-Pape dating back as early as 1157.

Geoffroy, the bishop of Avignon, had a vineyard within the territory of Châteauneuf-du-Pape. Clement V, the first Avignon Pope recognized the special soils of Châteauneuf-du-Pape in 1314. His successor, John XXII, in 1316, established the summer residence of the papacy in the village of Avignon. He recognized the distinctive terroir of the region for growing wine grapes and granted the wine produced there the rank of "Vin du Pape". He regularly drank the wines from the vineyards ‘in the north’ and did much to improve viticulture practices there.

Pope John XXII chose what he considered the ideal location for a residence and vineyard site, the hillock overlooking the Rhône Valley about halfway between Avignon and Orange –  Châteauneuf – and he took over the area and constructed the castle there, starting in 1317, and completing it in 1333. He planted grapevines and olive trees in the area.

According to the historic Apostolic Chamber archives, there were more than 3 million grapevines in Châteauneuf in 1334 covering more than 1500 acres.

Pope John XXII, promoted winemaking and production in the area and as a result, production increased to over three thousand liters per year. As the wines of Châteauneuf gained notoriety from being erved to ambassadors and representatives of foreign courts, they were shipped in barrels to Italy, Germany and Britain.

From the eighteenth century, the visionary winemakers of Chateauneuf-du-Pape were shipping their wine in bottles instead of using barrels, an important new step obtaining brand awareness in other parts of the world. 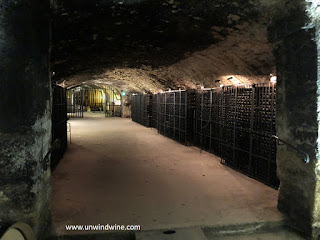 Château La Nerthe was recorded to be shipping it's wines in bottles as early as 1776, the year of the American Revolution.  The popularity and notoriety of the wines of Châteauneuf-du-Pape continued to spread through the 19th century.

In 1929, the Syndicat of Châteauneuf-du-Pape winegrowers assigned three experts to establish “the conditions of territorial origin and faithful, constant, and local traditions concerning the Châteauneuf-du-Pape appellation”. They issued a report in 1929 after four years of deliberations, and it was ratified. As a result, the Châteauneuf-du-Pape winegrowers became the first in all of France to impose production parameters. Their example was soon followed by many other French vignerons, as more and more regions across France adopted their model, eventually resulting in a nationwide set of appellation regulations.

Under the leadership and legal expertise of Baron Le Roy, the Cour de Cassation (French court of last resort) defined appellation boundaries and production conditions in November 1933. After several years of proceedings, in May, 1936, the decree of the appellation was published and Châteauneuf-du-Pape become the first wine-making Appellation-Origin-Controllee, AOC of France.

There is a notch in the bottom rim of the CDP glass bottle. I often have fun with this, handing the bottle to someone and challenging them to explain its purpose. Most often, the response is that it somehow relates to the 'racking' or turning of the bottles. Of course, that is not done with red wines, rather is a procedure related to producing and aging sparkling wine or Champagne. Since the bottles of Châteauneuf-du-Pape have the emblem embossed in the glass, it matters where the label is placed on the bottle. Hence, the notch in the bottle allows the bottling and labeling machine to align the label with the glass emblem!


In 1870, the Tulle de Villefranche family sold the property to the Joseph Ducos family. The sale was necessary largely due to the devastation of the vineyards by Phylloxera, the louse that attacked the roots of the vines, forcing investing in replanting of the vineyards with new resistant root stock.

The Ducos family maintained ownership of the property until 1941 when Château La Nerthe was bought at an auction by the Leclerc and Motte families. The estate was occupied by the invading German army during the war and the property was severely debilitated. The Germans used the elegant Chateau as a headquarters for the region and the wine cellars served as bomb shelters.

By 1985, Château La Nerthe had become dilapidated and was put up for sale by the Dereumaux family. In 1986, the property was acquired by the Richard family in partnership with David and Foillard negociants. A complete renovation of the estate took place and much of the vineyards were replanted. The new owners changed the spelling back to what it was by adding back the “h” that had been dropped earlier. The new labels once again displayed the original spelling of Château La Nerthe.

In 1991, Château La Nerthe expanded their land holdings with the purchase of an additional 54 acres of vineyards, thereby creating one of the largest estates in the Southern Rhône with 222 acres under vine. 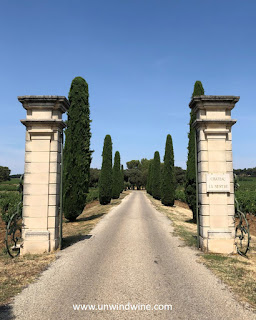 The vineyards and the château are located southeast of the village of Châteauneuf-du-Pape. The vines are planted in La Crau, Les Escondudes, La Reves and the La Nerthe lieux-dits (localities).

The La Nerthe estate has all the terroirs of the Châteauneuf-du-Pape appellation within the property. The 222 acres of La Nerthe vineyards are located in two single blocks around the castle. 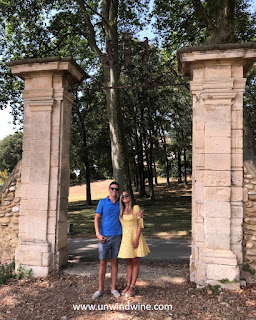 The exceptional, sloped terroir is the classic legendary soil of the appellation, sandy-clay with the surface covered by a layer of the famous ‘galets roulés’, the large, round, well-worn stones that originated in the Alps and were carried down to the Rhône by the ice age glaciers. These large pebbles store the heat during the day and release it at night aiding the ripening of the grapes. The property also has a natural spring on the grounds, which can be beneficial to the vines during periods of drought which commonly affect the region. 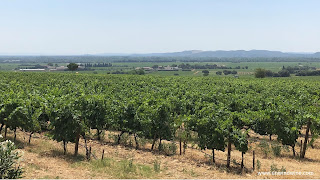 The La Nerthe vineyards are comprised of two large blocks. There is 148 acres of vines adjacent to and in front of the chateau. There, the soil is largely sand and clay in the terroir. The remaining 74 acres are behind the château and abut the plateau of La Crau, which sits behind and above the Chateau, which has more rocks and the stones, known as galets in the region.

Like some of the other legendary producers in the area such as Château Vieux Telegraph and Château Beaucastel, the vineyards of Château La Nerthe are planted with all 13 types of grapes allowed in the Châteauneuf-du-Pape appellation. The average vine age is over 40 years old. 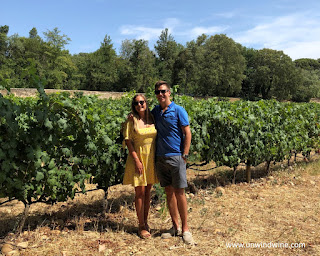 While the property has plantings of all 13 of the appellation’s permitted varietals, Grenache, Mourvèdre and Syrah dominate the red blend. The estate has one of the highest proportions of white vines in the region and produces a special white cuvée – Clos de Beauvenir – sourced from grapes from the clos directly in front of the château.

All the viticulture in the Château La Nerthe vineyards is done using organic farming techniques. 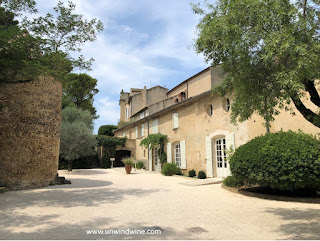 Starting with the 2015 vintage, Ralph Garcin, who previously worked for Jaboulet in Hermitage, was appointed general manager and winemaker, placed in charge of the estate and all its winemaking operations. He has set upon an ambitious program of process and technical improvements. He introduced vinification by plot and is investing in smaller fermentation tanks and larger ageing vessels to showcase the quality of the fruit in the cellar. He’s also been making improvements to their viticultural practices, such as introducing organic farming. 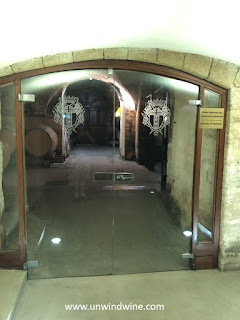 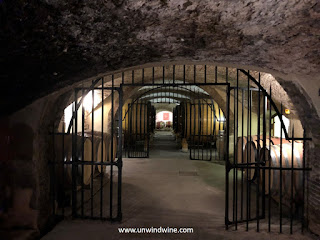 Our tour included the historic cellars that are underneath the château, the tank rooms, the barrel storage rooms, and the historic wine library storage cellars. We then were hosted in the hospitality center and served a flight of the recent vintage releases of the wines. 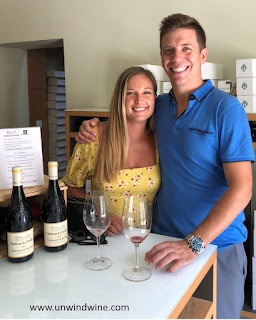 We tasted the Château La Nerthe Cuvee-des-Cadettes Châteauneuf-du-Pape 2016. This could be considered their 'flagship' wine, it is the premium label, not made every year, rather, only in the finest vintages. Cuvee-des-Cadeetes is approximately one-third each Grenache, Syrah and Mourvdre. Eighty percent of the wine spends a year in new oak barrels. 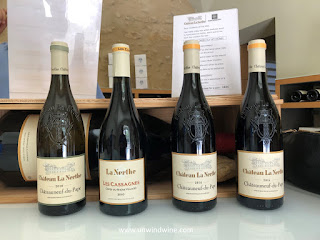 The standard flagship label is Château La Nerthe Châteauneuf-du-Pape, 2015, 2016 and 2018, a red blend comprising as many as all thirteen varietals grown 100% on the estate property - 55% Grenache, 17% Syrah, 15% Mourvedre, 7% Cinsault, 3% Counoise and the remaining 3% is a blend of the other varietals planted in the vineyard.

The wine is aged in variety of tanks and large barrels depending on the blend and the characteristics of the vintage, typically for 12 to 18 months in tanks, about twenty percent new French Oak barrels, and used French oak barrels.

Typically it is best consumed after 5 to 8 years of aging, it can easily be held for several decades depending on the vintage, and in top years can hold its prime drinking window for 25 to 35 years.

Approximately 15,000 cases are produced each year. 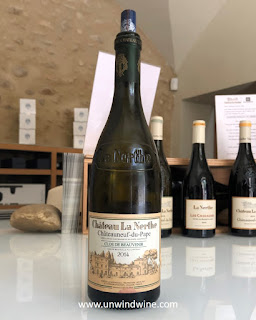 Chateau La Nerthe Clos de Beauvenir 2014, a blend of 60% Roussanne and 40% Clairette. Like Cuvee-des-Cadettes, Clos de Beauvenir is only produced in select vintages. The production is small, fewer than 250 cases of the special white wine in a release year.

Posted by UnwindWine at 7:09 AM